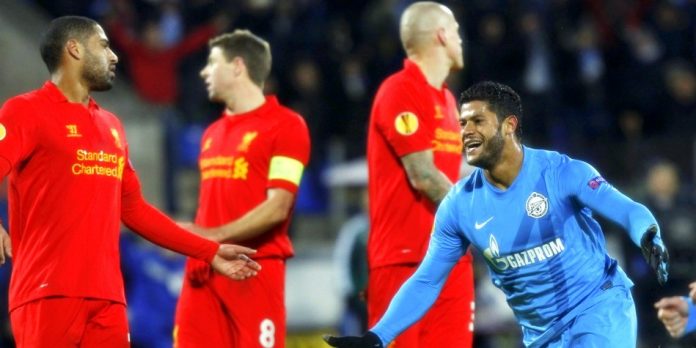 In the Round of 32 of the Europa League, we saw some straightforward results while some were just unbelievable.

After Joe Allen hinting that Liverpool will be focusing on the competition as their Premier League campaign is far from their own standards, we saw them succumb to a 2-0 defeat at the hands of Zenit St. Petersburg. Hulk scored a sensational goal but a goal within the next three minutes sealed the game completely.

With that win, Zenit have the best win ratio of all teams to have played in the competition. They’ve raised their mark to almost 82% with nine wins from eleven games.

Along with Zenit, Anzhi Makhachkala and Rubin Kazan also claimed victories on match day seven. Even though Samuel Eto’o had a penalty saved against Hannover 96, they still managed a 3-1 win. Kazan – being a man down in the second half – beat Atletico Madrid 2-0.

The Russian Premier League clubs have altogether the best win ratio (just above 57%). There are only two other leagues with an average of above 50% win ratio – the Spanish La Liga and the Turkish Super Lig.

Anzhi were the biggest overall climbers who moved up thirteen places to 63rd. While Europa debutants, Chelsea, entered the chart at 117th place.

Benfica moved up to fifth place in the all-time Europa League ranking list with their 1-0 away win against Bayer Leverkusen. The biggest movers in the top fifty, however, were Tottenham, Ajax and FC Basel – all of them rose six places.

Spurs ended Lyon’s undefeated record in the competition with Gareth Bale’s injury time goal but the highlight of the match has to be France U20 defender, Samuel Umtiti’s 55th minute screamer. Bale’s free-kick was good but Umtiti’s effort was an absolute bliss to watch.

KRC Genk was able to get a last minute equaliser against VfB Stuttgart which makes them the only club, alongside Chelsea, to have never lost a game in the Europa League.

Metalist Kharkiv managed a goalless draw at Newcastle United which was their fourth draw in the competition. They are now just one draw behind Liverpool’s record.

Kazan’s 2-0 win over Atletico marked the end of a run of ten consecutive home wins – a competition record.

Speaking of records, Rubin Kazan, Fenerbahce, Genk and Lazio have all completed a fourth successive away game without defeat this season in Europa – they are all two behind the all-time record now. Basel joined Leverkusen, Atletico and Kazan by registering their fourth successive clean sheet.

Radamel Falcao made his 30th Europa League appearance to level the record of most appearances of PSV’s Ola Toivonen and Sporting CP goalie Rui Patricio. Falcao is also the competition’s all-time highest goalscorer with 30 goals. Behind him is Fernando Llorente with 14 – who is now joint-second after Oscar Cardozo scored the only goal of the Leverkusen-Benfica game.

The second leg of the Round of 32 tie will be played on 21st February. Viktoria Plzen heads into the tie with three very crucial away goals against Napoli. While Tottenham is still not out of the water as a 1-0 defeat at Lyon will put them out of the competition.

Europa League: Round of 32 Results