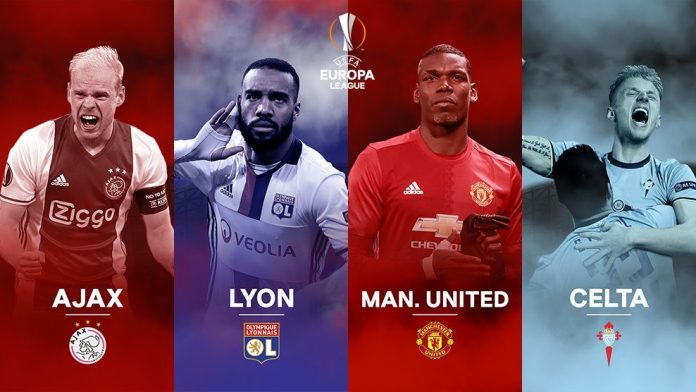 Manchester United, Ajax, Celta Vigo and Lyon made their way into this season’s Europa League semi-finals after some sensational performances in the last round.

The semi-final draw was completed in Nyon earlier today, following the completion of the quarter-final ties on Thursday.

Premier League giants Manchester United will be hoping to secure their place in next season’s Champions League by winning the Europa League this season. Jose Mourinho’s men are trailing their rivals in the top four race in the league right now. Meanwhile, the likes of Lyon were outstanding in the previous rounds and they will be looking to go all the way this year.

The likes of Celta Vigo and Ajax could be this season’s dark horses. The La Liga outfit have managed to pull off upsets in the league from time to time and will be looking to do the same here. Meanwhile, Ajax are the only team left in the competition who have won the trophy before.

This year’s semi-final ties will be played on the 4th and the 11th of May.

Ajax will take on Lyon in the first semi-final of this season’s Europa League. The Dutch outfit will play the first leg at home.

Manchester United will take on Celta Vigo in the other semi-final of this season’s Europa League. The Red Devils will play the first match away from home. Celta are no pushovers and this could be a tricky draw for the Premier League giants.