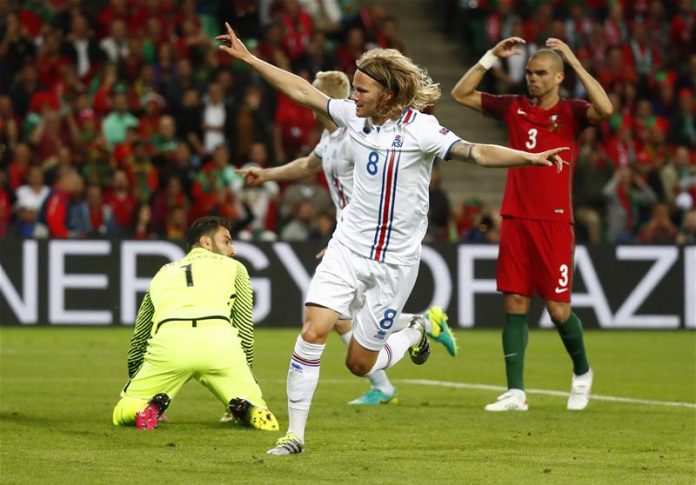 The stage was perfectly set for Cristiano Ronaldo. It was a night when Real Madrid superstar equalled Luis Figo’s record number of caps with 127 appearances. After Zlatan Ibrahimovic’s larger-than-life presence couldn’t earn Sweden a victory on Monday, it was left for Ronaldo to light up Euro 2016.

And he failed too. At Real Madrid, where he won two Champions League titles, Ronaldo often complained that his teammates weren’t good enough; it was expected that he would come up with a scathing attack on others, after being left frustrated all night in St Etienne.

After the match, he quickly shifted the blame on the opposition’s “small mentality” for Portugal’s result, implying Iceland’s over defensive mentality prevented them from scoring.

He even went far to aim a dig at their celebration, saying “I thought they’d won the Euros the way they celebrated at the end, it was unbelievable.”

The celebration knew no bound, as it was a historic occasion for the minnows, who were only making their Euro presence for the first time in their history. Around 30,000 Iceland fans turned out to watch their national team play at a major tournament, which was about 10% of their total population! Any other player would have applauded Iceland’s incredible journey; Ronaldo was in no mood to do so.

Portugal undoubtedly were the better team of the two. At full time, Portugal had 671 passes compared to 260 from Iceland. They produced 40 crosses in the match; Iceland managed just 9. Fernando Santos’ men had 26 attempts on goal, 10 of those on targets. Iceland managed only four shots. Portugal created nine set piece moves, while Iceland couldn’t register one.

Truth be told, Portugal dominated the game but they were kept in check, thanks to their profligacy in front of goal and heroics from Iceland goalkeeper Hannes Halldorsson.

For the first 45 minutes, Portugal gave the impression of a side that can go all the way to the finals. The passing was brilliant, movements off the ball were excellent, link up plays were superb and they were in complete control of the match.

But one moment in a lapse of concentration changed the dynamics of the game. The amount of time Birkir Bojarnson got to finish calmly from six yards out beggars belief: right-back Vierinha was out of position while Pepe was caught napping.

From there on, Portugal looked a team that are disjointed, dispirited with individuals trying to make an impression by scoring themselves. At the final whistle, it gives the feel they have a lot of work to do.

When Portugal needed their leader to step up, Ronaldo horribly had let them down. It took nearly 20 minutes for him to make any significant impact on the game and when presented with a one-on-one chance inside the six yards, he couldn’t connect the ball, let alone strike it. He registered 10 shots in the entire match with only one being on target.

Ronaldo has been the star figure for Portugal since he made his international debut for his country. He has contributed to 43% of Portugal’s (goals and assists) goals in Euro championships, but it seems he is possible playing for individual glory. And this might hurt Portugal badly.

This is a strong and talented Portugal side but the manner in which they wilted under slightest of pressure doesn’t exude confidence they can go too far in this tournament. Ronaldo can win matches on his own, but this over-reliability on him needs to stop. Now. He became petulant when his team looked up to him for inspiration. He looked sulky when Portugal wanted him to lead from the front.

All round performance from Andre Gomes

One player, however, did impress, was Andre Gomes. The 22-year-old midfielder was at his creative best last night: he won 100% tackles, made 53 passes, created four goal-scoring chances and had two shots on goal. It was from his pass that Nani scored the opening goal for Portugal.

The Valencia midfielder has been a reported target for Manchester United this summer, and his performance on Tuesday night certainly would have excited the Red Devils fans.

The result didn’t do enough damage to Portugal, as Austria, the other heavy-weight team in the side lost 2-0 to Hungary earlier in the day.

Video of the day

Once again, it has to be with Ronaldo. After the match, Iceland’s captain Aron Gunnarsson went to shake Ronaldo’s hand and possibly requested him to swap jerseys. Ronaldo simply ignored him and looked straight ahead and later did shake his hand as if he was forced to do so.