We progress to the Round 12 of the Barclays Premier League and as usual we’ve some cracking games coming up this weekend to keep ourselves busy with. Pick of the games being the North London derby, where a resurgent Tottenham Hotspur looking to cause an upset at the Emirates.

Chelsea travel to Stoke City looking to find some stability in the league following their 2-1 victory over Dynamo Kiev in the midweek.

Ahead of Week 12, let us take a look at the Latest EPL Table 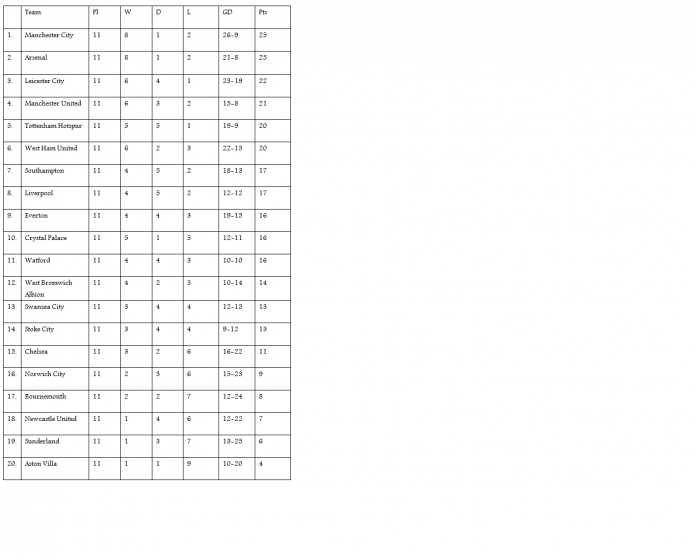 We have a fascinating game at hand. Arsenal swiftly moving into top two, joint-topper in fact and separated only by the goal difference, after winning their last five league games. 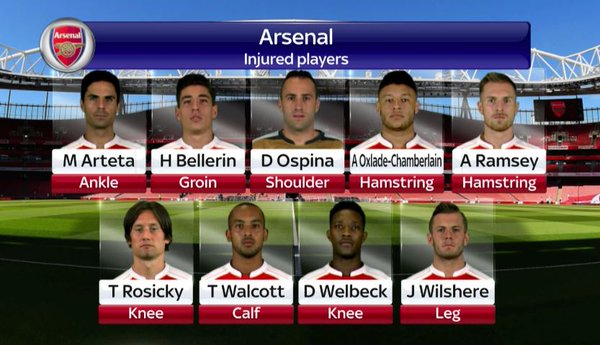 But, with the team plagued with so many injury problems, Wenger is seriously lacking quality from the bench. Also, how will the Gunners respond after their humiliating 5-1 defeat against Bayern that puts them on the brink of Champions League group exit remains to be seen.

Most importantly, the Gunners are up against an in-form Spurs team that have won their last three games in all competitions, and are undefeated in seven of their last eight games.

Chelsea fans have made it clear they want their beloved manager Jose Mourinho to continue. Even owner Roman Abrahimovich has kept faith with the Portuguese. But for how long?

Sitting uncomfortably 15th in the league table, it’s now or never for Chelsea. The Blues have a solid record against Stoke City, but with the form they are in at the moment, it is really hard to predict the outcome.

Willian: There have only been 4 direct free-kick goals scored in the CL this season, @willianborges88 has now scored 3 of them #cfc

A defeat at the Britannia would be Chelsea’s fourth in a row, and surely it will ring the alarm bells at the owner’s office desk.

On the positive note, Chelsea will be looking to draw inspiration from their European campaign so far and translate that form into the league.

Since Jurgen Klopp took charge at Liverpool, the Reds have remained undefeated in their last six games, a feat only matched by the legendary Bob Paisley. The confidence is sky high at the moment, having won their last three games in all competitions.

Klopp has ensured Liverpool maintain a solid defensive shape at the back. The Reds have conceded only three goals since he took charge. And it is a good time to face Alan Pardew’s men, who are winless in their last four matches.

Leicester have impressed everyone with their free flowing and cavalier style of football. There have been over 2.5 goals scored in six of Leicester’s last seven games in the Premier League.

Jamie Vardy: Only Aubameyang & Lewandowski (both 13) have scored more goals in Europe’s top 5 leagues this season than Vardy (11)

Furthermore, they’ve been solid at home, having picked up 10 points of a possible 15 at home this season, and are unbeaten in 14 of their last 15 games in the league.

All eyes will be on striker Jamie Vardy, who has scored in eight consecutive Premier League games. Can he do it again against Watford?