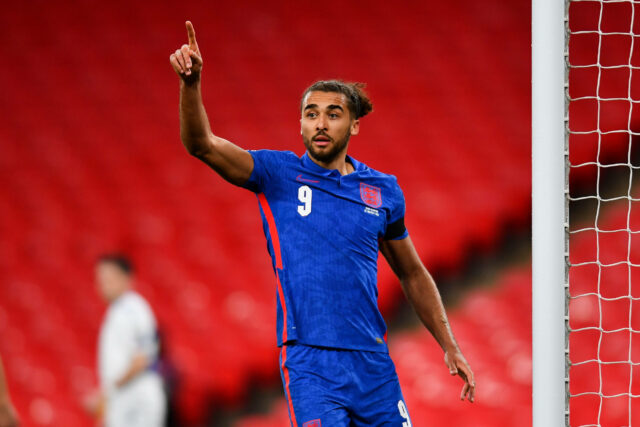 It was one-sided domination from England at Wembley, with Calvert-Lewin bagging two goals for his country.

James Ward-Prowse scored his first goal for England after he swept in from Ben Chilwell’s low cross.

Calvert-Lewin, the in-form Everton striker, doubled the advantage with a header from a fine Reece James delivery.

Raheem Sterling added the third as England camped in San Marino territory for the entire game.

Calvert-Lewin added again after being laid on by Jesse Lingard, eight minutes after the break.

Aston Villa striker Watkins scored on his international debut with a crisp low finish seven minutes after he came on for Calvert-Lewin.

Still the best feeling in the world to score for my country 💙 qualifiers up and running 🦋 pic.twitter.com/EoFrXtiq8C

England have been arguably presented with the easiest group in international football, and Gareth Southgate will be disappointed that the finishing from his side was poor, despite the scoreline.

England enjoyed 85% of possession and produced 32 shots during the game.

The 24-year-old striker, who has been in outstanding form for the Toffees, said after the match that he is simply looking to grab the opportunities presented to him at the moment.

In other news, the Premier League player of the month nominees has been announced.