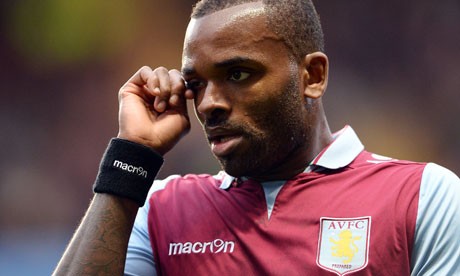 Out-of-favour striker Darren Bent has been forced out of the first-team dressing room at Villa’s training ground, and is now having to train alongside a group of fellow exiles – Stephen Ireland and Alan Hutton.

Aston Villa manager Paul Lambert wants Bent’s £60K-a-week off the wage bill, and is hoping a side will make an official bid for his services in the coming weeks.

Many will question Lambert’s decision to victimise the England international – adding how Bent was barely given enough of a chance to prove his worth to the side last season. The 29-year old scored three goals from nine Premier League starts.

The striker has also been told he will not be considered for selection for any of the Midlands’ side’s pre-season friendlies, and he won’t be named in any squads should he still be with Villa after the close of the summer transfer window – at the end of August.

While Lambert is under strict orders from owner Randy Lerner to do all he can to have the highest earners removed from the club, the lack of respect shown to a player who has been an asset to Aston Villa won’t go down well with the fans.

It was Bent who kept the side in the Premier League in his debut season after joining from Sunderland on January 2011.

Despite being inexplicably dropped this season, Bent has been a model professional throughout, and hasn’t used the media to express his dismay in the decision.

During his time with the Villains, Bent has scored 25 goals in 64 games – in all competitions. Regarded as a prolific goalscorer by most, surely Bent could be utilised by Aston Villa, as they are still paying his wages, while trying to find him a new club?

Finding a new club willing to pay Bent £60K-a-week will not be easy.  Has Lambert made the wrong decision in exiling Bent? Or was it the right thing to do? Does Bent deserve better treatment? Should Aston Villa use him until a formal approach is made?