Welcome back, I hope you guys enjoyed your weekend.

Let’s start with some team by team news, shall we?

Jose Mourinho thinks that Manchester United are lucky not to be playing Chelsea on the 15th, considering their stumbling loss against Portsmouth. While Ferguson will not fall for this kind of bait, it will be interesting to see how Manchester United fare in their bid to win the Premiership this season. A couple of tough away games plus possible Champions League football will make it tough for them before the Chelsea game on May 9th.

As things stand though, United could lose that game and still beat Chelsea to the title as long as they win all the rest of the games.

What I really want to know is, how much did BBC Sport pay for Jose to pose like this? 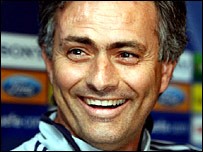 In other Chelsea news, Essien is battling to be fit for the Valencia tie, but a more realistic option is a return against Blackburn.

Jose Mourinho was quoted over the weekend in a Portuguese rag as saying that he made the careers of Terry, Lampard and Drogba. He’s right, and I doubt anyone would disagree with him on that one. Does it make him ‘special’? Nope.

Arsenal fans have finally realised something that I have been predicting from the end of last season – the current team is not good enough to challenge for the Premiership title.

Wenger’s strategy is risky and it will take Arsenal a couple of more years before they can be genuine title contenders. Will the fans, and more importantly, will the board back Wenger through this time? I hope so – club bias aside, Arsenal have some very talented players and they deserve their chances.

Wenger has also backed Rafa’s and Jose’s suggestions that the reserve teams of top clubs should be playing in the Championship. While the Championship teams may not like the idea, it is a very good one and I hope to discuss this more over the summer.

But will he benefit either side? Definitely. Arsenal could use the experience and direct play, Manchester United need someone better than Richardson on the bench.

1. Martin Kettle makes a passionate argument about why golf is better than football – and all he succeeds in doing is propping up football’s negative points while summarily ignoring those of golf (or indeed, footy’s positive attributes). It’s a good piece but fails to stand its ground under the weight of Kettle’s bias.

2. Sunderland continue their march to the top of the Championship. With 5 games left in the season, Sunderland are a point behind Derby and the form team. Birmingham, with a game in hand, are two points behind Sunderland but have had a rough patch recently and have several away games lined up.

Can Keano take Sunderland to the Premiership? Automatic qualification now looks very likely, and if Sunderland can beat Southampton away today, they should be considered favourites for the Championship title.

3. Kudos to Roeder for protecting Michael Owen and Shola Ameobi by refusing to play them in reserves games and instead making sure that they stick to training and improve their fitness. No one wants a repeat of the Owen injury, and as a result I think that Newcastle will probably hold Owen back till the start of next season – or at least they should. Ditto with Ameobi.

International managers may have different concerns (McClaren will say that he needs Owen, but he needs his current crop of players to perform better first), but Newcastle should keep these two in training for as long as possible.

4. I wonder how Real Madrid will react to this.

David Beckham has gone on record to tell Cristiano Ronaldo, through the press, that he should stick with Manchester United as long as possible. The statements are fueled by Beckham’s support for the club but even then it will be interesting to see how Calderon and Capello react to it.

5. We told you that Liverpool won’t sell Crouch, but you preferred to listen to the tabloids.

Now that Rafa has come out and said that Crouch won’t be sold next season (and considering that he just brought in Bellamy and Kuyt, they’re not going anywhere either), will you believe me now?

6. Instead of me going through each game, here’s a look at today’s games:

7. Jon Hotten writes in the Scotsman about the Premiership’s chances in the Champions League. It’s a well-written article and I strongly recommend that you read it.

The best part? The finish:

“On both occasions that English clubs have won the Champions League, the games have been exceptional, bordering on flukes. When they start to make it look routine rather than supernatural, the Premiership can really say that it has arrived.”

That aside, Reading are a good team and Steve Coppell is a very good manager.

9. With Barcelona losing and Sevilla only managing a draw, Real Madrid’s win over the weekend puts them 2 points behind Barca and 1 point behind Sevilla.

10. Anders Frisk, Patrick Vieira and Rudi Voller have a new website on which they discuss the latest issues in football. I haven’t listened to their podcast yet but I plan to during the week. If any of you do get to it first, please share your views here.