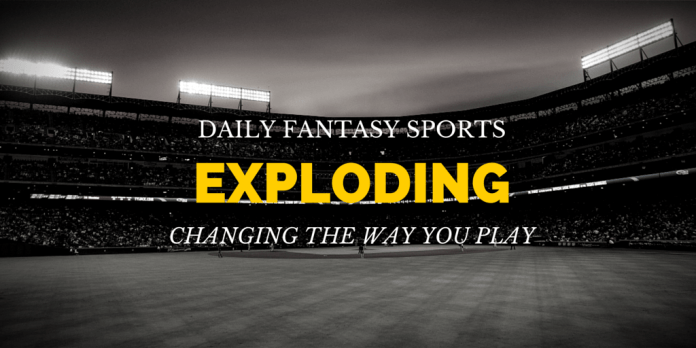 American football and baseball are not derivative of rugby and cricket, and this miniature American flag I’m waving will prove it! If you believe that, I’ve got some dental floss to sell you. So how is anyone to take the newest fusion being served on the international sports entertainment platter called daily fantasy sports (DFS), especially considering the recent buzz about possibly lax data security measures by FanDuel and DraftKings?

Let me be forthright about my muddled perspective before I dive in. I’m American; however, I haven’t lived in the US for four years and counting, preferring the welcome arms of Central/South American and Caribbean lands—sentiments shamefully unreciprocated by a significant voting bloc of Americans.

I’m not a fan of American football or baseball, but I love football. In the late 70’s and early 80’s I’d always wanted to be a fan of West Ham United, and all because I loved the Cockney Rejects back in the day. But like them, I didn’t want to be mistakenly associated with any of the outspoken fans with a right-wing, racist agenda. So since I have no home turf to claim in glorious England, I’d decided to root for Southampton that boasts a very low incidence of racially-motivated violence (Go Saints!).

The first DFS site was launched in 2007 in the US, and since then, Fanduel and DraftKings have captured the biggest market shares there. They also intend to dominate overseas having recently debuted in Europe and the UK. They’re competing with Malta-based Oulala , which includes as many as sixty more statistics that factor into their scoring system than their competitors according to CEO Valéry Bollier. This is how Oulala is striving to be classified as a game of skill rather than one of chance, which they hope will obviate any international gambling law restrictions.

Skill versus chance is at the comical heart of the DFS controversy in the US, of course, because we dare not call it gambling. The very man who drafted the law excluding fantasy sports as a game of chance, has decried in so many words, “That’s not what I meant,” wishing his legalese hadn’t been interpreted so literally. “Betting money on a game with an uncertain outcome to win more money” is an archaic definition of gambling for Americans, and it’s apparently fraught with loopholes.

The argument for skill is nicely summarized here by Mr. Bollier: “The whole point of fantasy is to prove to your friends that you know sports better than they do.” If it’s that important to you, there are ways to objectively prove your sports knowledge outshines that of your friends, but I would argue that winning at DFS isn’t necessarily the best nor certainly the only one. Consider some facts.

The shockingly low chances of ever winning money at DFS were revealed in Sports Business Journal in July 2015. Ninety-one percent of the winnings are taken home by 1.3% of the players—the sharks. The “big fish” (those with disposable incomes) lose about $4000.00 annually, and the “minnows” (probably you) lose about ten bucks a month on average. What more evidence do you need that, compared to you, the sharks have superior skills and a superior knowledge of sports?

Whether validated with a university degree or savant syndrome, sharks generally have an advanced knowledge of probability, algorithmic formulas, and statistical modeling—but not necessarily sports. In fact, many of them migrated from the poker world to DFS. They spend a considerable number of hours developing their Excel spreadsheets that account for the minutest details that could bear influence on a match (e.g., weather conditions on match day).

Creating and tweaking a spreadsheet certainly involves some esoteric skill, but once it’s finalized, the sharks just type and click their way into thousands of contests weekly in order for the odds to work out in their favor. A $12,000 loss today will be recovered by a $16,000 win tomorrow. If I were a shark making six figures a year (and they do), I might give my tender tappers a rest and consider posting the following employment ad: “Seeking Sports Data Entry Specialist. No knowledge or interest in sports necessary.”

You might not face off with the sharks in the nascent phase of DFS, but you will, and likely very soon. So where’s the spirited (and often spirit-soaked) camaraderie and the thrill of gambling if your competition is a formula-laden spreadsheet, able to make thousands of calculations per second? Isn’t it better to lose because you chose a player based on a hunch instead of forgetting you didn’t factor in the wind conditions predicted on match day?

There’s still a bounty of fun to be had with DFS, but if you want to guarantee you’re not snookered, you’re better off starting out or sticking with a free-to-play or virtual currency DFS platform like Bantasy. It’s an iOS/Android app with a more social atmosphere, there are more customization options, you can invite whom you want to play, and best of all, the pitch is shark-free.

In closing, thanks, UK, for handily classifying FanDuel and DraftKings as the games of chance they undoubtedly are. There’s no shame in it. Gambling’s a gas! Just be aware of the risks and who—or what—you are competing against. In the meantime, we Americans will slowly shake ourselves free from these “mind-forged manacles” of Puritanical doctrine. And one day, who knows? Maybe more of us will embrace a second language.