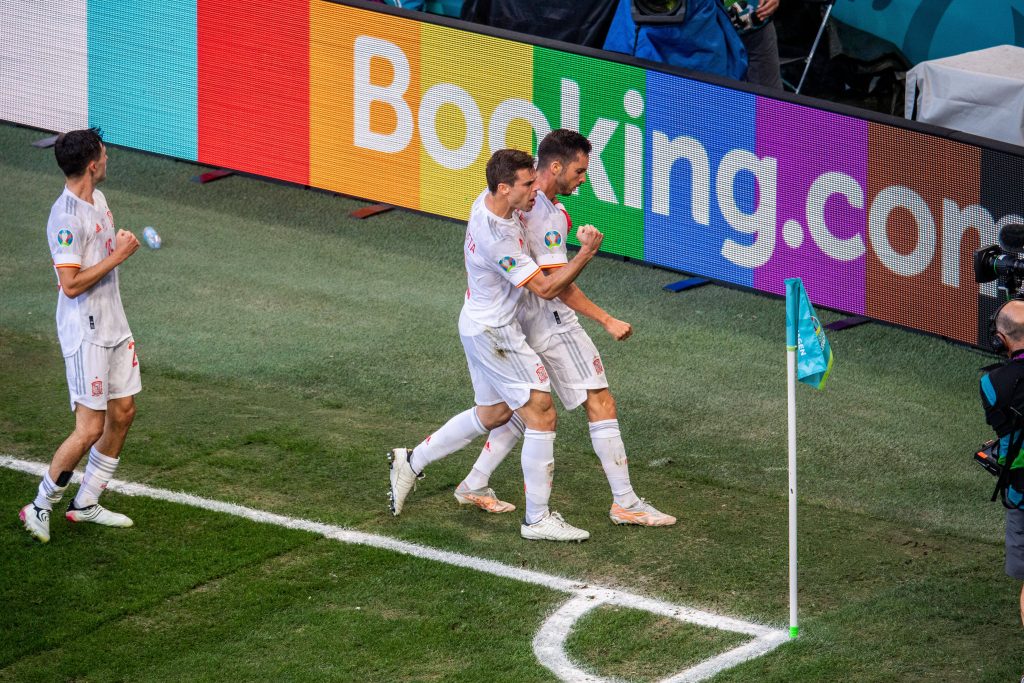 Spain progressed to the quarter-finals of Euro 2020 following an exhilarating clash with Croatia on Monday.

Spain had the better of the opening stages, creating two excellent chances to take go ahead. The first came when Pedri slipped a ball through to Koke, but his finish was too close to Dominik Livakovic in goal.

Soon afterwards, Ferran Torres swung in an inch-perfect cross for Alvaro Morata at the back post. However, the forward’s header was blocked by Domagoj Vida when he really ought to have scored.

Spain were made to rue their missed chances in comical fashion just moments later. Pedri overhit a backpass to Unai Simon, who failed to control the ball and allowed it in for 1-0.

It was the ninth own goal of the tournament – as many as every other European Championships combined.

It was officially awarded to Pedri, although Simon was the one coming under the most scrutiny.

Thankfully, this was cancelled out shortly before half time. Jose Gaya’s powerful shot was palmed out by Livakovic, but it fell perfectly for Pablo Sarabia, who slammed into the top corner via a deflection.

And they completed the turnaround in the second half. Torres crossed for Cesar Azpilicueta, who got ahead of Josko Gvardiol to nod in from close range.

Gvardiol came close to making amends for his error ten minutes later when he was fed by substitute Mislav Orsic. However, his low shot was well saved by Simon.

And Gvardiol was again at the centre of things as Spain appeared to put the game beyond all doubt.

Pau Torres found namesake Ferran, who nicked ahead of the defender and finished into the far corner to make it 3-1.

But this was far from the end of the drama. Croatia managed to pull one back with five minutes remaining to ensure a nervy end.

Luka Modric got into the box and pulled one across goal, and Orsic bundled it over the line from close range.

And Orsic was influential as the World Cup finalists managed to nick an equaliser in injury time. His cross was met by the head of Mario Pasalic, who turned the ball into the corner to take the game to extra time.

Early in extra time, Croatia almost got themselves ahead. Orsic created more problems down the left and flashed a ball across goal.

It fell to Andrej Kramaric, but his close-range effort was well kept out by Simon.

Just moments later, there was another goal, with Spain reclaiming their advantage. Dani Olmo put in a deep cross for Morata, who controlled excellently and powered a half-volley into the roof of the net.

Their two-goal advantage was restored shortly before half time in extra time. Again Olmo was the architect, crossing for Mikel Oyarzabal to finish to make it 5-3.

Right at the death, Olmo almost got one for himself when Oyarzabal teed him up, but his shot pinged back off the post.

The full-time whistle went with the score 5-3, making it the highest-scoring game of the tournament so far. Spain reached the next round and will face France or Switzerland in the quarter-finals.

Dominik Livakovic (6/10) – Can’t be blamed for any of the goals. Made a few decent stops.

Josip Juranovic (5/10) – Didn’t deal with the threat of the Spanish wingers well enough and didn’t add much going forward.

Domagoj Vida (5/10) – Not directly responsible for any of the goals, but still part of a defence that allowed too many chances for the opposition.

Duje Caleta-Car (4/10) – Really struggled to deal with Morata, who bullied him all game.

Josko Gvardiol (3/10) – Absolute nightmare game. Responsible for two goals and almost allowed another when he lost the ball to let Morata in on goal.

Marcelo Brozovic (5/10) – Couldn’t gain control in midfield and didn’t do enough to protect the back four.

Luka Modric (7/10) – As tidy on the ball as we’ve come to expect. Some very good work in the build-up to Orsic’s goal.

Mateo Kovacic (6/10) – Had some lovely dribbles but failed to maintain any control in midfield.

Ante Rebic (6/10) – Caused some problems with his pace. Wasn’t potent enough in the final third.

Unai Simon (6/10) – Made possibly the worst error of the tournament but picked himself up with some impressive saves.

Cesar Azpilicueta (7/10) – Defended well for most of the game and got himself on the scoresheet. Struggled to deal with Orsic late on.

Eric Garcia (7/10) – Kept the Croatian attack at bay most of the time. Substituted with 20 minutes remaining.

Aymeric Laporte (5/10) – Part of a backline that fell apart towards the end of normal time. Bailed out by the forwards.

Jose Gaya (7/10) – Stepped in for Jordi Alba and didn’t look out of place. Contributed to Sarabia’s goal. Subbed off with an injury.

Sergio Busquets (7/10) – Controlled things for 85 minutes of the game. Failed to halt Croatia’s momentum in the closing stages of normal time.

Pedri (7/10) – Very tidy in possession and unlucky not to get an early assist. Overhit the back pass for his own goal but can’t really be blamed.

Ferran Torres (8/10) *MOTM* – Took his goal very well and got an assist for Azpilicueta. Should keep his place for the quarter-final.

Alvaro Morata (8/10) – Linked up brilliantly and made it very tough for the Croatian defence. Missed a couple of chances but eventually got the important fourth with an emphatic finish.

Pablo Sarabia (7/10) – Got an important equaliser. Always looked threatening when on the ball.