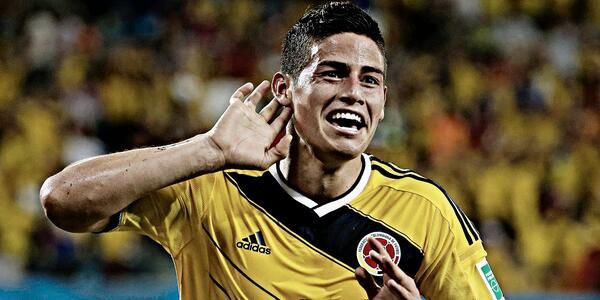 Colombia, fresh from topping Group C, take on Group D runners-up, Uruguay, tomorrow in Rio De Janeiro at 5pm local time. Both nations border Brazil; Colombia to the north and Uruguay to the south, so the climate should not play a factor in this South American match-up.

The nations have met a whopping 38 times, Uruguay leading the way with 18 victories, but this is looking likely to be Colombia’s chance to raise their win-tally to 12.

With Luis Suarez still recovering from injury, the Uruguayans looked considerably weakened by his absence in the Costa Rica game, and now they are back in a Suarez-less situation after his contribution of just two games. He made all the difference in the England game, but then allowed his dark-side to resurface against Italy, sinking his infamous teeth into Chiellini’s shoulder. The lunacy of the Liverpool striker’s actions will have had a profoundly negative affect on the Uruguayan camp, so expect morale to have taken a blow.

Colombia have been unstoppable so far this tournament, hitting 9 goals in the group stage, only conceding twice, and scoring maximum points. James Rodriguez of Monaco, has 3 goals already this competition and will be running at the boys in blue with pace, from just behind the Colombian strikers.

Without their main striker, Cavani will be required to hit top form for Los Charrúas, but he looked largely ineffective in the first game without Suarez alongside him. Diego Forlan may well return to the line-up to add more top-level experience to the team. The former Manchester United attacker still has plenty of skill and ability, even if he is advancing in years.

Colombia are on a roll and will take full advantage of Uruguay’s morale knock. They will terrorize the Uruguayan box and will be too much to contain. Look out for James Rodriguez steaming forward from the front-point of midfield and don’t expect a goalless affair with these two nations.