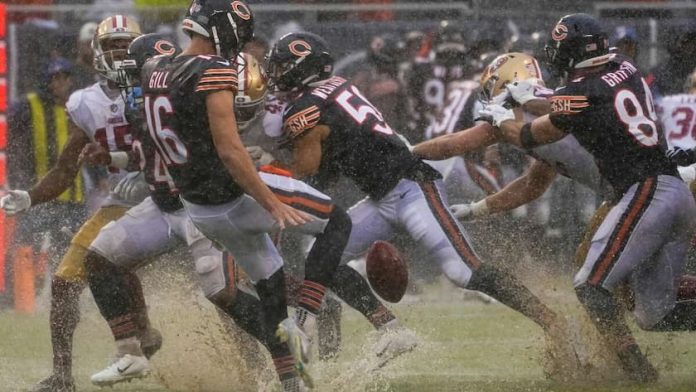 Monsoon type conditions in Chicago on Sunday caused absolute havoc in the game against the Chicago Bears and San Francisco 49ers.

The game ultimately ended in a 19-10 Bears win but that was after playing on a field which was covered in puddles and standing water, meaning the possibility of making plays was almost impossible.

The rain was so brutal that the game became hard to see on TV coverage which resulted in a graphic overlay of yard markers which had been removed by the heavy rain.

the Chicago Bears went out in the rain today and had some fun. football is back. pic.twitter.com/QKeK1aZ2vX

The Chicago Bear owners will be disappointed with the way the field handled the rain due to the fact they had just installed new turf to hopefully hold up to this type of weather.

Although the Chicago Bears won, they did face a step back before halftime after being pushed out of field-goal range when holder Trenton Gill was called for unsportsmanlike conduct for bringing a towel onto the field.

Due to the conditions of the pitch Gill used the towel to try and soak up some of the excess water before Cairo Santos’ 47-yard attempt.

However, according to referee Clay Martin this is frowned upon in the NFL: “You cannot bring what we consider a foreign object — this was not a towel that would go on a uniform — out to alter the playing surface,

“We felt that provided an unfair advantage, using the towel to wipe down the area where the ball was going to be placed.

“That’s the spirit of the rule, we just felt with using (the towel) to create some dryness if you will, that it would create a competitive advantage.”

The Bears really got a unsportsmanlike conduct penalty for wiping down the field with a towel 💀
pic.twitter.com/diIK3om4ng