Chelsea defender, Branislav Ivanović, may well be thinking about his next move. The Serbian’s contract with the Blues expires in the summer, and it is unsure whether he’ll be offered an extension. The club have a policy of giving players above the age of 30 extensions of only one year.

Moreover, Ivanović has lost his place in the side under Antonio Conte, who has switched his system to play three at the back. The player has also come under a lot of criticism from his own fans in the last year for his lacklustre performances.

According to Spanish daily Mundo Deportivo, as relayed here by the Daily Mail, Barcelona could well be a possible destination for the right-back. The Catalan giants are facing the prospect of losing Aleix Vidal in the January transfer window, and are looking for replacements.

They are confident of landing João Cancelo from Valencia in the summer, but want a top-quality defender until then. It seems like experience is a big factor for them. Shakhtar Donetsk‘s Darijo Srna and Juventus‘ Stephan Lichtsteiner are at the top of their wish list along with Ivanović.

The Chelsea man, having made more than 350 appearances for his current employers including 50-plus in the Champions League, may have lost his pace in recent times, but still has the pedigree to play for a top club. 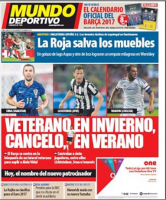 Another team looking at signing Ivanović is Ligue 1 outfit Olympique Marseille. Reported here by Le 10 Sport, the French side are interested in luring the 32-year old to the Stade Velodrome in January, but could lose out if Barcelona were to force the issue.

Chelsea manager Conte is looking for a reshuffle at Stamford Bridge in the upcoming transfer windows, despite his team picking up some fantastic form over the last month. The Italian wants to bring in personnel to suit his system. Among the ones at the risk of facing the axe are Ivanović, John Obi Mikel and Cesc Fàbregas.