Two major Spanish newspaper Marca and Mundo Deportivo have covered Marco Reus’ transfer story today. Both have covered from a different transfer perspective. Obviously. Reus can leave Borussia Dortmund next year for only €25m, and host of European clubs including Premier League giants Chelsea & Manchester United are vying for his signature.

Marca’s version of the report

They say Chelsea are set to offer €10m/year contract and are set to hijack a deal as, Real Madrid claim to have a pact to sign the player already.

Marca then heaps praise on Reus saying he has leadership qualities as well as impressive technical abilities and he’s capable of playing “in any position in attack”, from the right, left, as a no.10 or as a striker. 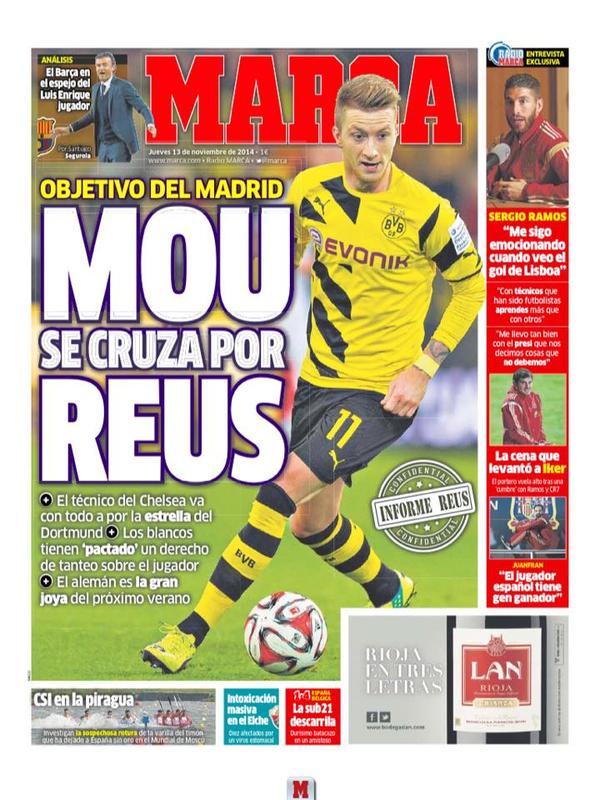 Furthermore, they think he is a brilliant forward and scores lots of goals. Last year he scored 23 goals (in 44 games) and this season he has 5 (in 10), despite missing several games through injury.

Marca believes Reus is almost ready to join an elite side. In Germany they are in no doubt that that he’s ready to play for one of the biggest sides in the world. He is not seen as a ‘galactico’, but he has everything to become one. They believe in Madrid he could truly explode into one of best players in the world.

Mundo Deportivo’s version of the story

The Catalan newspaper claim, Reus, whose release clause will drop down €25m, will decide his future in January.

German giants Bayern Munich want him to complete their trio of talent they’ve taken from Dortmund (Gotze, Lewandowski). Real Madrid, Man Utd and Man City are the biggest rivals alongside Bayern and Barca & they do not mention Chelsea. 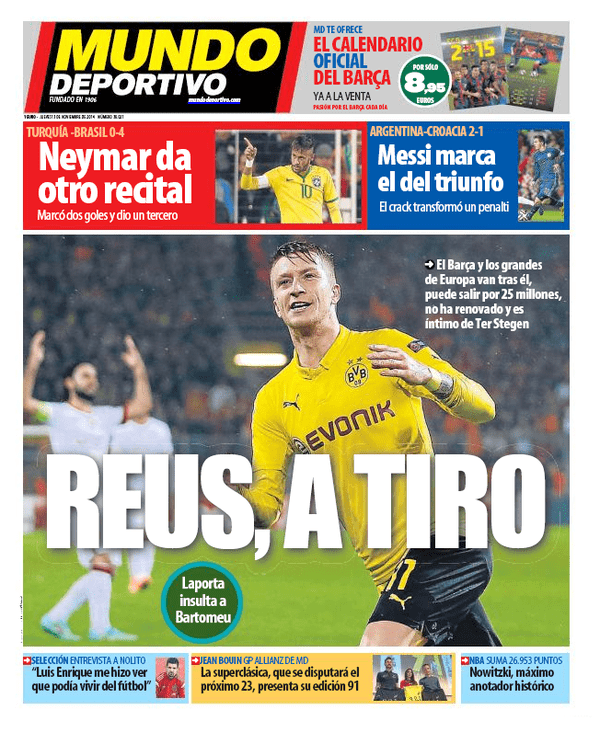 Barcelona feel that Reus admires their style in their favour, but he plays in the same position as Neymar, which means Barca may pass this opportunity to sign him. Barcelona are currently under a transfer ban.  However, they have applied to the courts again to overturn their ban and instead make it only for ONE transfer window (this January), not TWO.

Where will Reus end up to? Chelsea? Real Madrid? Barcelona? Or Manchester United? Have your say below…