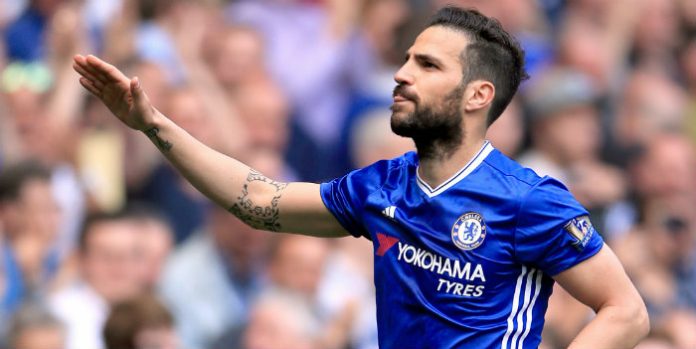 Chelsea manager Antonio Conte has revealed that Cesc Fabregas will need to improve the defensive aspects of the game if he wants to be a part of the Italian’s first team plans.

In addition to that, Conte also rubbished rumours that Fabregas is not in the manager’s plans right now.

The Italian assured that the Spanish international remains in Chelsea’s plans for now but will only get into the starting lineup once he has worked on the defensive side of his game like Oscar. He added that Fabregas is an accomplished passer and has fantastic technique.

Conte said: “Cesc is in my plans and in Chelsea’s plans”.

“We all know Cesc is a fantastic player. I see him in every training session with great work and effort. If he continues in this way, it’ll be very difficult for me not to choose him in my midfield. But I want this from a player, putting many doubts in my mind over choosing someone else.”

“Cesc is a great player. We all know Cesc, a great technical player. Now I’m starting to get to know him as a man. A great personality. I’m pleased with him. He’s working very well. He’s improving a lot on many aspects, above all the defensive situations. I’m very clear with my players: when a player deserves to play, I put him in the team.”

“I always thought that this team needed to find a good balance when you have the ball and, above all, when you don’t have the ball. Last season Chelsea conceded 53 goals. Now, we have found the right compromise between defensive and offensive situations. Oscar is a good player, great technique and can do both facets: both offensive and defensive. I asked him to stay always focused on the game, to stay in the game. He’s an important player for Chelsea.”

So far, Fàbregas has played only 26 minutes of first team football and his role has been largely restricted to cameos from the bench.

The Chelsea star is expected to be on the sidelines once again as the Blues prepare for the visit of Liverpool later tonight. It is evident that Conte prefers the industry of Oscar and Nemanja Matic.

Brazilian midfielder Oscar has taken up Fabregas’ role in the Chelsea first team since the start of the season. Conte explained that Oscar has been contributing offensively as well as defensively in the midfield. The player was linked with an exit from Stamford Bridge at the end of last season.

Quite clearly, Oscar is now a key part of Conte’s plans and has managed to win over the Italian.

Fabregas joined Chelsea in the summer of 2014 and has been their most creative midfielder since then. The Spaniard was one of the major reasons why Mourinho won the Premier League title with the Blues upon his return to Stamford Bridge.

The former Arsenal captain has picked up 39 assists for club and country since signing for Chelsea.