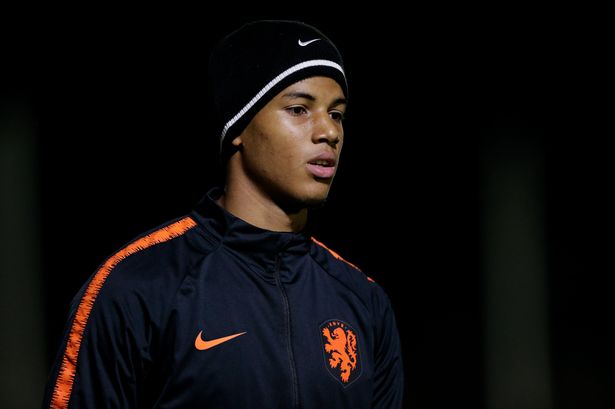 The agent of Xavier Mbuyamba has revealed that Chelsea have made an interesting proposal to sign the young defender from Barcelona.

The 18-year-old only joined the club’s under-19 side from MVV Maastricht last summer but his potential appears to have caught the eye of elite European teams.

Speaking to Voetbal International, agent Carlos Barros revealed that Real Madrid, Juventus and Inter are some of the high-profile clubs, who have enquired about his client.

However, he added that the most exciting proposal has come through Frank Lampard’s Chelsea, who believe the teenager can break into their first-team in a couple of years’ time.

“Almost all major clubs in Europe have asked about Xavier,” He told.

“Real Madrid are also there, they are serious about their youth system, but that would of course be a sensitive switch.

“Juventus and Inter are interested, as are top clubs from Germany and England. Chelsea have the best papers. Of course we discussed this extensively last year.

“Chelsea gave a fantastic presentation. There is a unique football atmosphere there.

“They really think that in one to two years, he can be in the first team.

“Frank Lampard has of course already proven that he is not afraid to play with young players.

“Being in the starting line-up at Chelsea at the age of twenty would, of course, be great.”

Lampard has been open to the prospect of playing with young players in the Premier League and a number of academy graduates have made their breakthrough this term.

Tammy Abraham, Reece James and Fikayo Tomori have already established themselves in the first-team squad while Billy Gilmour made his mark with the senior side just prior to the coronavirus shutdown.

Mbuyamba is primarily a central defender but he has played a number of matches for his former side Maastricht from the right-back position.

The teenager has already made three appearances for the Barcelona ‘B’ side and he has been compared to Virgil van Dijk from his younger days due to his aerial presence.

Mbuyamba had the opportunity to train with the Blues Under-23s earlier last summer but the club could not sign him because of the FIFA-imposed transfer ban.

Lampard’s side have continued to track his progress and it remains to be seen whether they can strike an agreement with the Blaugrana for his services.