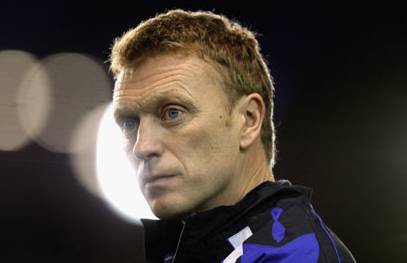 Lauded by the many, derided by the few. However, it just so happens that those ‘few’ are all Everton fans – fans that witness their side’s foibles on a regular basis and aren’t willing to adhere to the perpetual received wisdom that their manager, David Moyes, is the best there is outside of the Premier League’s upper echelons.

After enduring yet another torrid start to their Premier League campaign (two points from five games), Everton saw their all-too-brief Carling Cup run ended unceremoniously by League One side Brentford last night, losing out 4-3 on penalties after consummately failing to ascertain the upper hand during the previous 120 minutes of football.

The Toffees got off to a decent enough start when promising youngster Seamus Coleman slotted home with the game only six minutes old but, after long periods of ultimately toothless bluster, Brentford’s Gary Alexander restored parity mere minutes before the interval – turning Myles Weston‘s cross past Jan Mucha with a powerful header.

Everton continued to waste their opportunities during the second half, Marouane Fellaini striking the post from a tight angle and Brentford ‘keeper Richard Lee (who was excellent on the night) proving to be more than a match for Yakubu, Diniyar Bilyaletdinov and new-boy Magaye Gueye on several separate occasions.

Brentford were even handed a golden chance to win the tie outright in normal time when they were awarded a penalty following Coleman’s trip of the flighty Weston, but Charlie MacDonald eventually saw his low penalty repelled well by Mucha.

Even the reluctant introduction of Everton’s star pairing Mikel Arteta and Steven Pienaar wasn’t enough to provide the edge for Moyes’ side and, after a wrought climax, the game plodded through extra-time and almost inevitably went to penalties.

With the shoot-out level at 3-3, it was summer recruit Jermaine Beckford that first missed and then, needing to score to keep Everton in the tie, Phil Jagielka‘s effort struck a post thus sending Brentford into the fourth round of the tournament.

After the final whistle, Moyes trudged from the Griffin Park pitch amidst a hail of boos, as he and his charges had done the previous weekend upon losing 1-0 at home to newly-promoted Newcastle United in the Premier League, but it was a particular altercation concerning the two sets of supporters that caught the Everton manager’s eye;

“I thought it was terrible. I saw a fan throw a bottle into our fans. I said to him ‘I saw your face. I saw who you were’. He got a bottle and went right up and threw it right into the middle of our group of supporters.

If the police want me to follow it up and try to find the individual that threw the bottle into the crowd then that would be fine by me, it wouldn’t be a problem. I didn’t grab him. I wanted to but obviously that would have brought more attention to the situation.”

Moyes was also damning when it came to assessing his side’s continuing impotency in front of goal;

“We abused the opportunities we had to score and knew that they would keep coming and in football you have to take those chances when they come.

You have to make your own lucky breaks. I thought we had numerous opportunities but [Brentford] deserved it because they hung in and never let us out of the game. The crowd gave them a lift but we can only blame ourselves.”

Before Coleman’s goal last night, Everton had failed to score away from home all season, and they are currently still awaiting the first goal on their travels in the Premier League.

Their spirited last-ditch 3-3 draw with Manchester United aside, haven’t managed to score more than one goal in league game, and the fact that half-man-half-salmon Tim Cahill is leading their scoring charts (with two goals) should tell you all you need to know about the Everton’s almost non-existent strikeforce.

The volley of frustrated post-match boos are steadily becoming more and more prominent and their have even been calls for David Moyes’ head (metaphorically speaking), such is the level of acrimony swirling around Goodison Park at the moment.

Many supporters are becoming increasingly frustrated with Moyes’ relentless insistence on deploying his trademark ultra-cautious 4-5-1 formation, his brazen lack of eyebrows, and many still harbour resentment over the seemingly intangible re-investment of the ‘Lescott money’ – as it is now unequivocally deemed.

For me, the fact remains that no other manager could have possibly done a better job at Everton over the past eight years, and the dearth of available alternatives (possibly excluding the pricey Martin O’Neill) suggests that there really is no need to make such knee-jerk calls.

Everton will come good this season, they always do…eventually. It may take a statutory minimum of four months for them to get their act together, but history seems to dictate that they’ll be pushing for those Europa League places come May, as per usual.

Now all they need is a half-decent striker, whose knee ligaments aren’t made of plasticine and warm chocolate.