From Alemao‘s coin throwing incident to Rivaldo‘s acting in the World Cup, up to Dida‘s Oscar winning performance of Wednesday in Glasgow: these are three stories of three Brazilians, all worthy of a role in a Latin Telenovela (Spanish soap opera). I picked up this piece from Gazzetta dello Sport, but I thought I’d share it with you here.

Ricardo Rogério de Brito, aka Alemão, played a long spell in Serie A as a midfielder for Napoli. On April 8, 1990, Napoli (who were in a very close race for the Scudetto with AC Milan) were playing an away game to Atalanta: in the 77th minute of the game, Alemao went to take a corner-kick and fell down to the floor as if struck by lightning. What happened? Replays showed he was struck by a coin thrown from the stands (50 Lire, as the referee’s report later indicated, which is no bigger than ¢10 or 10 pence).

The Napoli physio (Salvatore Carmando) arrived to perform first aid procedures, because Alemao’s forehead has started bleeding: the game was stopped for a few minutes, amidst a big confusion of players. After about two minutes, Alemao got up (still surrounded by his teammates), and as the Napoli physio approached him again to take a look at him, the Brazilian player inexplicably pushed him away. At this point, the referee of the match (Luigi Agnolin) found and picked up the coin that was thrown from the stands.

When play resumed, Alemao was still on the sidelines being medicated by the physiotherapist, so the Napoli coach decided to sub him off for Gianfranco Zola. 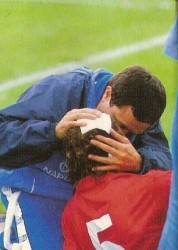 The exact moment that Zola entered the field was officially the start of events that ended up determining that season’s Scudetto winner. The match ended 0-0, but the Atalanta players would later declare to have heard the Napoli physio say these words to Alemao, as he was being medicated: “Stay down! Stay down!”.

Following the match, Alemao was hospitalized for his “injury”. The doctors declared that he “could speak regularly”, but the Napoli president (Corrado Ferlaino) told the press that he had “found his player in a deep state of confusion, and that he did not recognize him”. That same Sunday Bologna-Milan was being played and ended 0-0 (even though the referee did not see a perfectly valid goal for Bologna).

A few days later, the sports tribunal of Serie A gave Napoli a default 2-0 win for the Alemao incident, effectively putting the Neapolitan team ahead of AC Milan in the standings (Napoli would go on to win their 2nd Scudetto a few weeks later). The Rossoneri team got very angry and strongly contested the decision: they claimed that Alemao’s antics were nothing but acting, a ridiculous farce for football. For years to come, Alemao’s story put a big stain and suspicions on Napoli’s second Scudetto.

Vitor Borba Ferreira, commonly known as Rivaldo, star midfielder of the Brazil national team for many years. This story’s more recent, so I’m sure most of you will remember it. It was the time of the World CUp 2002, during the group stage of the competition: Brazil were playing Turkey, and were leading 2-1 in the 87th. The Turkish players were getting a bit restless, and one of them (Hakan Unsal) violently kicked the ball against Rivaldo as he was waiting to take a corner kick. 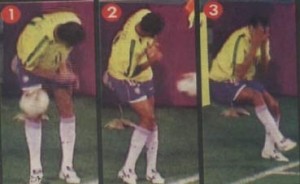 The Brazilian player, who had been clearly hit in the legs as replays showed, fell to the ground and brought his hands to his face, as if he had been mortally wounded and was having a brain seizure. The referee (Korean Kim Young Joo) fell for the Brazilian’s antics, and gave Hakan Unsal his 2nd yellow of the game.

In the following days, the entire world of soccer had seen what really happened and condemned Rivaldo’s anti-fairplay behaviour. Some even joked that “Because Rivaldo’s brain is located in his legs, if you hit those he’ll bring his hands to his face”, but there was little to be laughing about: even FIFA officials were indignated at this type of behaviour, especially with all those “FIFA Fair Play” flags flying around in the stadiums.

Experts anticipated than an “exemplary punishment” was in store for the Brazilian, a suspension, an expulsion from the tournament… something that would prevent anyone from doing this again. Instead, only a fine of 11,500 Swiss Francs (â‚¬17,043 or £5,180) was handed out to Rivaldo, peanuts for someone with his weekly paycheck. Evidently, the disciplinary committee was scared of irritating Brazil and Korea (the tournament’s hosts), and chose not the suspend the Brazilian from subsequent matches.

In days following FIFA’s decision, there was still much talk on Rivaldo’s acting, at which point his coach and some his teammates tried to defend him. Rivaldo himself even admitted later “Obviously I exaggerated the injury for the guy to be sent off (…) The ball hit my hand and my leg (…) It didn’t hit me in the face but that kind of attitude must not be allowed on the pitch (…) He deserved a red card.” Here’s what Ronaldo had to say: “Rivaldo did a smart thing. The World Cup is like a war, and you don’t send idiots to war”.

Nélson de Jesus Silva, aka Dida, AC Milan goalkeeper. On Wednesday October 3, 2007, Milan were traveling to Celtic for their 2nd game of the Champions League campaign.

With Milan just having conceded the 1-2 goal, a Celtic supporter stormed the field and gently hit Dida in the head. The Brazilian keeper initially started running after his “aggressor”, then fell to the ground as if mortally wounded, holding his head. But we all know that story already…

What’s your opinion on this? If you know any other of these “stories”, please share them with us.