Five-Time World Champions Brazil take on Scotland on 27th March 2011 at the Emirates Stadium in London. We are offering one lucky Soccerlens.com reader (plus one guest) the chance to visit the Emirates to watch the Brazil v Scotland game live. Read on for more details.

Brazil and Scotland last squared off at the opening game of the 1998 World Cup, which was incidentally also the last time Scotland qualified for a major international tournament.

For Scotland, it completes a week in which the team will covene for a five-day training camp at the La Manga resort in Spain. The match is also part the acclaimed Brazil World Tour (managed by Kentaro) and is expected to be a sellout with only a few thousand tickets left to go!

Scotland’s squad is expected to be announced on Thursday, with Brazil’s squad soon to follow.

It will be the first time Scotland have played in London since the 1-0 Euro 2000 qualification play-off win at Wembley in 1999, a result that was not enough to earn progress to the finals.

Scotland and Brazil have met 10 times, four times in World Cup finals, and the best results achieved have been draws, 1-1 in a Hampden friendly in 1966 and 0-0 in the 1974 World Cup in Mexico when they came close to scoring a winner.

Tickets can be bought via www.arsenal.com/brazilvscotland, but if you’re based in the UK and would like to attend the game, here’s your chance to win free tickets to Brazil v Scotland.

When
On Monday, 21st March 2011, Soccerlens.com will pick one lucky winner from the draw.

How do you enter the draw?
Be a fan of both Soccerlens.com and Brazil World Tour on Facebook to qualify.

Any other conditions?
Ideally you need to be based in the UK, or at least have a UK delivery address for the tickets. Tickets are non-transferable. 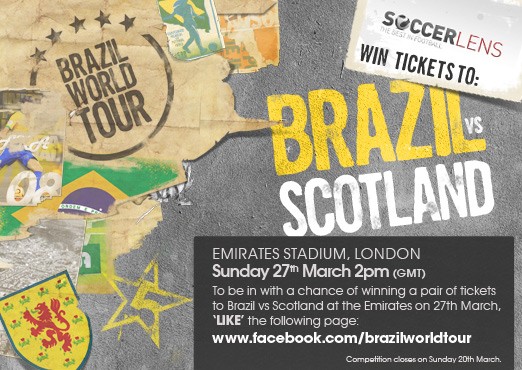 You only have 5 days to enter the draw to win tickets, so get busy with Facebook on Soccerlens.com and Brazil World Tour now!