After respectively seeing off the threats of Slovakia and Chile in the second round, it will be Bert Van Marwijk‘s Netherlands and Dunga‘s Brazil that will contest the first of the World Cup quarter-final ties – and what a tie it promises to be.

With just three FIFA world ranking places between them (Brazil top and the Netherlands in 4th) it would appear, on paper at least, that we have a potential feast of technically superior football on the cards.

However, the Dutch come into the game off the back of several fairly underwhelming, pragmatic Group E performances and have yet to really live up to the ‘totaal voetbal‘ philosophy that all Oranje World Cup squads are supposed to intrinsically embody.

During the group stages, the Netherlands looked almost pedestrian at times, having to rely heavily on sporadic moments of individual inspiration from their key players (and their opponents at times) to dispatch a succession of theoretically ‘lesser’ opponents.

Although Van Marwijk’s side have been far from poor, they will have to raise their game substantially if they are to realise their hopes of going one stage further than any other Dutch side has ever managed, and finally lift the World Cup trophy.

Brazil have yet to really break sweat (metaphorically at least) at this summer’s tournament although, other than Portugal, they are yet to meet opposition that can genuinely match them for competency.

Apart from having to work a little harder to beat the resilient North Koreans that they would have liked in their opening game, the Selecao have rarely been (or at least, seemed) troubled.

Coach Dunga has received criticism for his outwardly ‘negative’ system but, as it’s been pointed out on numerous occasions, the two defensive midfielders he chooses to deploy in unison with a now-rock solid central defence allows his attacking full-backs, Michel Bastos and Maicon, to play a lot further up the pitch – with the raiding runs of the latter proving to be an especially invaluable weapon in the Brazilian’s already swollen offensive armament.

Of course, any side managed by a man that used to be known as ‘the guard dog’ during his playing days will have an element of the ‘practical’ about it, but this stoic edge has led to the Brazilians becoming a much more unified collective – a collective which now ensures that a result is secure before they begin to add superflously mesmerising flourishes of Joga Bonita, for which they are renowned, to proceedings. 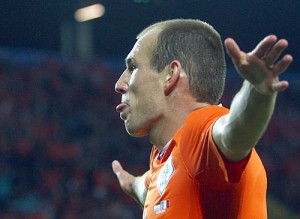 As far as injuries are concerned, there are no fresh worries for either side going into the game.

It was a similar story for Brazil, who were able to reinstate Kaka’ to the first string, after he was forced to sit out of their second round game with Chile due to suspension.

The Real Madrid forward came into the tournament after enduring a torrid debut season at the Bernabeu, but has steadily improved during his time in South Africa, with his athletic presence and intelligent build-up play now becoming increasingly predominant as-and-when Brazil break down their opponent’s defensive lines.

Both Robben and Kaka’ share talismanic qualities and, as such, are both definites (barring any unfortunate incidents between now and kick-off) to start for their respective sides on Friday afternoon. 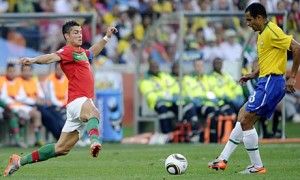 There really isn’t much to call between the two teams, and this lack of decisive factors may either lend itself to a tense, technical showpiece or a stalemate of epically disappointing proportions – but the law of averages will hopefully prevent the game from transmogrifying into the kind of dull, mean-spirited stalemate that Brazil’s final Group G match with Portugal eventually became.

The head-to-head stats are evenly matched, the respective squads are both brimming with potentially match-winning talent, both sides are unbeaten in the tournament so far and, most importantly of all, the betting odds are almost indistinguishable.

It would seem that once everything is taken into account, we are all but guaranteed a classic World Cup encounter – but then I said the very same thing about Brazil vs Portugal as well, and look how that turned out!

Brazil are the favorites for the bookies with the Netherlands at 7/2 to turn the tables. Can the Dutch trio of Robben-Sneijder-van Persie upset the bookies or can the South American trio Kaka-Robinho-Fabiano live up to expectation. Click here to bet on this and other World Cup games.