For the fourth time in FIFA Futsal World Cup history, Brazil conquered the gold medal on home turf Sunday morning. It was a match which all pundits anticipated to be a clash of the titans, with reigning World & European champions Spain providing a very worthy opponent for the Auriverde.

It the end, only a penalty shootout could settle a tied 2-2 score after extra time, during which substitute goalkeeper Franklin (stepping on precisely for that purpose) made two key saves on the Spanish shooters. After their gold in the Netherlands (1989), Hong Kong (1992), and Spain (1996), Brazil can chalk up a fourth title on the big Futsal chalkboard. 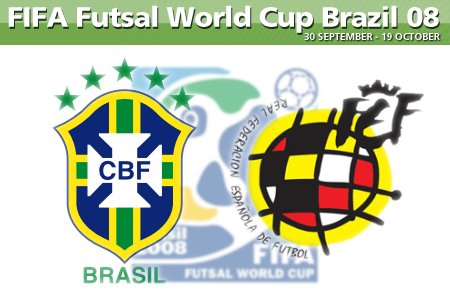 (From FIFA.com): Twelve years have elapsed since Brazil last claimed the FIFA Futsal World Cup. But thanks to two fabulous penalty saves from Franklin in a heart-stopping shootout, the Auriverde finally ended their long wait to rule the world once again, prevailing 4-3 from the spot after a thrilling 2-2 draw.

Reigning champions Spain sent a message of intent at the kick-off, lining up with five world champions. Brazil responded by showing they were not going to be bossed around, however, contesting every loose ball as if their lives depended on it.

Although both sides stuck firmly to their gameplans in the opening minutes, patiently maintaining possession and waiting for openings to appear, it was the Brazilians who had the edge. Spain’s Luis Amado was the busier of the two keepers, and he had to be sharp to deny Lenisio on two separate occasions as well as Cico and Falcao, whose impudent backheel so nearly put the local favourites ahead. 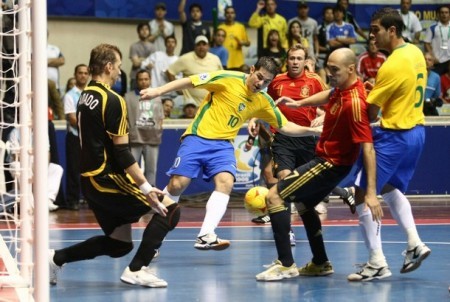 Relying on quick breaks to unsettle their opponents, the Europeans almost stole the lead themselves after only two minutes, with Amado throwing long for Javi Rodriguez only for Tiago to block alertly.

The longer the game went on the more important the first goal became. Brazil coach Paulo Cesar de Oliveira shuffled his pack up front, even pairing Falcao and the powerful Betao together in a bid to outmuscle the Spanish. But every time his side had a sight of goal Amado was on hand to thwart them, denying Schumacher and Vinicius at the end of two superbly worked counter-attacks. 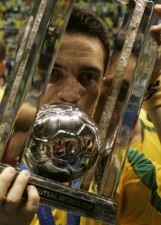 In the end it took a stroke of good luck for the Brazilians to edge ahead, Marquinho‘s 27th-minute corner kick deflecting off Borja’s face and beating Amado at the near post. 1-0 Brazil. The Spaniards refused to capitulate and were level within two minutes when Torras powered home a left-foot drive. 1-1.

Despite being denied the services of Falcao (elected Player of the Tournament) through injury, Brazil came storming back, with Vinicius restoring the home side’s lead by thrashing the ball high into the net after Amado had pulled off two more fine stops. 2-1 Brazil, and with just three minutes left on the clock, that appeared be that.

The men in red had not read the script however, and forced extra-time when Alvaro poked home at the far post with barely a minute left. 2-2

Although both sides went into overtime with five fouls each, the pace did not relent. Not for the first time, goalkeepers Amado and Tiago showed their shot-stopping skills at either end to ensure the title would be decided on penalties. And it was Tiago’s replacement, Franklin, who proved the hero of the afternoon, denying Torras and Marcelo to spark wild celebrations at the Maracanazinho. Samba-time!

.
Note: Italy beat Russia on a score of 2-1 on Saturday, to grab the FIFA Futsal World Cup Bronze medal. You can read the full match report here: 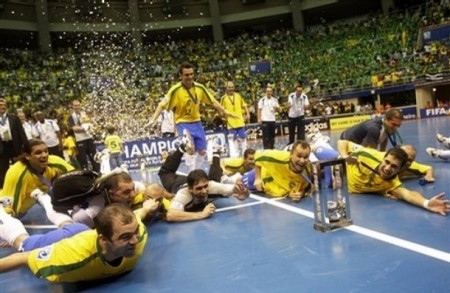