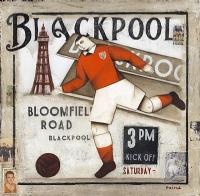 Perhaps it is because Romanticism eludes any attempt at a concise definition that it has become a term so freely tossed into the melting pot of football criticism and punditry.

It is beautiful as a Beckham cross twisting a line of defenders inside out, as sublime as the screams of 100,000 ‘Barca!’s at Camp Nou; it is the interweaving of reality and art into an abstract truth by the all-seeing genius, a Coleridge or a Cruyff.

It is, ultimately, the rebellion against reason, a fragmented collection of voices at once crying ‘No!’ against the tide of a new, liquid reality, in which everything is chartered and checked, tested and re-tested. It’s about wonder, and wanting to wonder.

If we can put aside the occasional raking pass from Charlie Adam, Blackpool’s own Franz Schubert, there isn’t all that much that is sublime or wonderful about Ian Holloway’s team. Rather than the tortured spirit of the wilderness crying out unattaimable truths, Blackpool were more like the beggar who cunningly masquerades as an aristocrat and gains entrance to an exclusive dinner, regaling guests with the tallest of tales, imbibing, with a gusto only a poor man could ever enjoy, the fineries of the rich before he is ultimately discovered and returned to the streets whence he came. Blackpool’s tale has not been Romantic, but not even Jose Mourinho would deny that their season has not contained a shot of romance.

The trick Blackpool managed to pull this season was that they convinced everybody they were a Premiership club, of Premiership calibre, with Premiership expectations. They did this by playing, well, some bloody good football. Let’s not get carried away – just as Charlie Adam isn’t in the same league as Xavi, Pirlo, or even Paul Scholes, Blackpool weren’t quite Arsenal or even Tottenham; however, aside from the top six or so teams, English teams do not often stroke the ball around confidently in triangles, counter-attack with purpose, keeping the ball on the ground. Blackpool did, and they did it well.

The trouble is that, as is so often the case, there was a catch: Blackpool can’t defend. Perhaps it’s because Romanticism eludes any attempt at a concise definition that, when it comes to football, we are all Romantics. We want the sweeping gesture. We want absolution. We wanted to believe to feel enraptured by the football of this marginal northern club without acknowledging that for every couple of goals they were scoring at one end, they were conceding four or five at the other.

Today’s match at Old Trafford summed it all up. Having gone behind against a Manchester United in expansive, celebratory mood, Blackpool grasped the reigns and went 2-1 up, silencing a home crowd who had come to watch their side swagger towards the final whistle, when they would be able to lift the Premier League trophy. Whilst few teams embroiled in a relegation battle can boast the wherewithall or the ability to accomplish this feat, one has to admit that, on the other hand, a Wigan or a Blackburn would, at this point, be able to shut up shop and make life extremely hard for a Manchester United side who just wanted the game to finish so they could celebrate their title.

United’s equaliser came when Blackpool panicked at a counter-attack from the home side, funneling so tightly into the centre of the field that Park Ji Sun had Blackpool’s entire right corridor to run into before taking his time to pick out the run of an unmarked Anderson, who finished well. It was Championship defending from a team whose attacking football wouldn’t be out of place in the Europa League. Everett’s own goal, which gave Sir Alex Ferguson’s side the lead, was another example.

In an ideal world, Blackpool’s cavalier attitude to defending would have been rewarded with a slice of luck here or there over the course of the season, just enough to have given them enough points not to have become embroiled in a relegation battle. It wasn’t to be. Having thumped four past a hapless Wigan on their own turf in their Premier League debut in August, Blackpool heard that the Latics had held out for a 1-0 win at Stoke, of all the tricky places to go for a crunch match this year. In the end, over an entire season, it’s about stealing points rather than earning them (as Blackpool’s hosts would doubtless agree).

So, what now for arguably the most undervalued side in Premier League history? It’s unlikely that £500,000 signing Charlie Adam will want to drop back into the Championship; his stock is as high as ever and his sale should fund quality replacements for other outgoing players. DJ Campbell, who had already shown flashes of Premiership quality before he joined Ian Holloway’s outfit, could be one of them.

However, this is not a collection of Galacticos about to break up. This was a well-drilled, adventurous side which was more than the sum of its parts. It’s unlikely we’ll see them again at this level. But they deserve our thanks and congratulations not only for playing beyond their financial means, but for doing so in a style which has proven too difficult even for some of the wealthier clubs in English football.