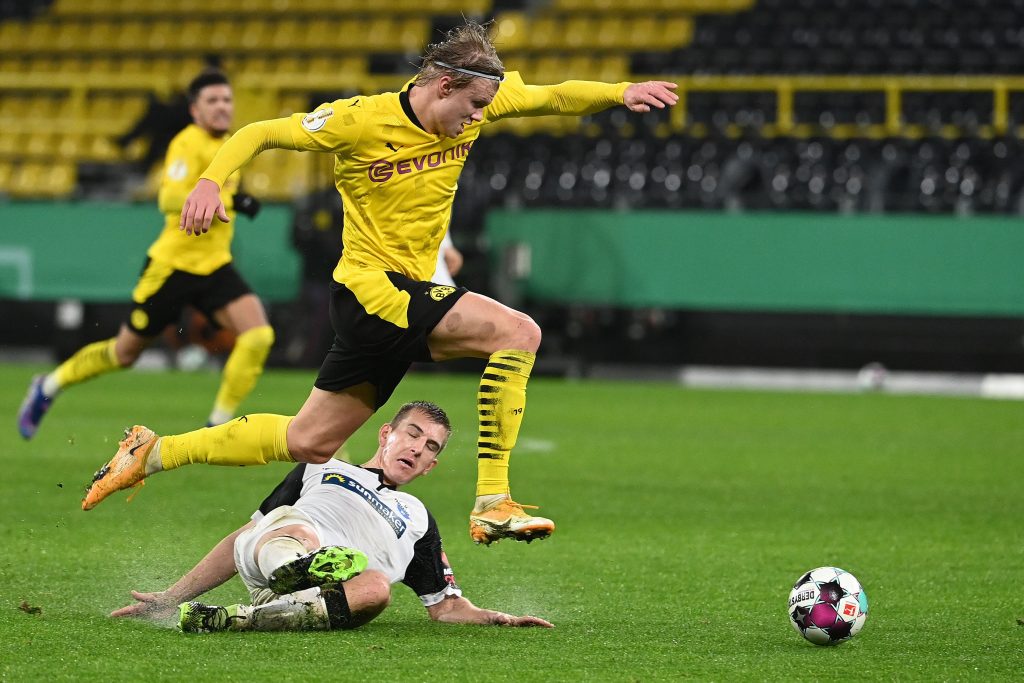 Haaland made his breakthrough during the 2019/20 season. He first caught the eye with his prolific performances for RB Salzburg in the Champions League group stages.

He carried this form into the second half of the season with Dortmund following his transfer in January 2020.

He has since established himself as one of the world’s very best strikers, scoring 49 goals in as many games for the Black and Yellows. This has attracted the attention of several of the world’s biggest clubs.

However, ESPN claims that any club willing to sign the 20-year-old will need to stump up an eye-popping €180m for his services. This would be the second most expensive transfer in the history of football, behind Neymar’s move to Paris Saint-Germain in 2017.

This will likely rule out Barcelona in their pursuit of the Norway international. Newly-elected president Joan Laporta has reportedly set his sights on the striker, but the club’s mountainous debt will be a serious hurdle.

Similarly, bitter rivals Real Madrid may also be incapable of bringing Haaland to La Liga. Los Blancos are also suffering financial difficulties and are seemingly focusing on World Cup winner Kylian Mbappe. The chances of signing both players are slim.

PSG should have the finances to pay the asking price. However, they have reportedly set aside a large chunk of their budget for Argentinian superstar Lionel Messi. However, a deal could be possible if one of Neymar or Mbappe leave.

Manchester United, Manchester City and Chelsea have also been named as potential takers for the youngster. All three clubs would smash their record transfer fees to bring him to England.

Man City are the favourites for his signature. They are in the hunt for a new striker, with all-time top goalscorer Sergio Aguero expected to depart this summer. Harry Kane and Romelu Lukaku have also been named as possible targets.

Manager Ole Gunnar Solskjaer could give Man Utd the upper hand in negotiations, given that he worked with Haaland during his time at Molde.

However, relations between the Red Devils and Dortmund are sour following last summer’s Jadon Sancho saga.

Chelsea are perhaps the least likely to sign the Norwegian, although they have the financial clout to blow all of their rivals out of the water.