In this series I will be looking at some of the greatest Brazilian players to have graced the game of football over the last sixty years, using the 1950s, the decade in which Brazil marched to their first World Cup triumph, as a starting point.

In part one, I take a look at the finest footballers to have pulled on the yellow and green jersey of the Selecao during the 1950s and 60s. Part two will analyse players from the 70s and 80s, whilst part three will deal with the 1990s and players plying their trade today (links at the end of the article).

These selections will doubtless spark debate, so please make suggestions and let us know if you think differently.

With crippled, twisted legs, there was never a more unlikely candidate to be such a skilful and mesmeric winger, but Manuel Francisco dos Santos, known colloquially as Garrincha, the “little bird” was the original maestro, a Brazilian hero and a Botafogo legend. Despite a number of personal battles off the field with alcoholism and financial irregularities, Garrincha has been immortalised in footballing history as one of the greatest dribblers and creative influences ever to have taken to a football field.

Both on and off the field Garrincha was a carefree, bohemian, almost chaotic figure who shunned order and convention in all he did. No better was this attitude displayed than when he inspired Brazil to World Cup success in 1958 and 1962, the displays of genius for which he is remembered as one of the finest, most imaginative players the game has ever seen.

As a footballer Zito can be seen as the forerunner to the likes of Mascherano, Gilberto Silva, Fernando Gago and Patrick Vieira. Zito, who played in Brazil’s triumphs in ’58 and ’62, was a highly organised defensive midfielder, a pragmatic, calming influence in Brazilian teams often filled with individualistic attacking talents.

Perhaps Zito’s greatest individual moment came in the final of the 1962 World Cup when he scored to put his country 2-1 up against Czechoslovakia, a game Brazil eventually went on to win 3-1. A fitting moment for one of Brazil’s most influential players during that period.

Modern players such as Daniel Alves, Maicon and Javier Zanetti owe everything to the pioneering wing-back play of Nilton Santos. Nominally a defender, Santos broke down the predominant stereotypes associated with defending and transformed himself into a potent attacking weapon, bombing down the left flank and involving himself in much of Brazil’s forward play in the process.

Santos was named in four Brazilian World Cup squads (1950, 1954, 1958 and 1962) and was a particularly important and influential player during the 1954 and 1958 competitions, Brazil’s first truly modern wing-back. As well as being a regular in the yellow and green jersey, Santos was a Botafogo stalwart, making over 1,000 appearances for the Rio de Janeiro outfit during an incredible 36-year tenure as a professional footballer.

Waldyr Pereira, more commonly known as ‘Didi’, represented his country 68 times, playing as an instinctively creative midfielder during the ’54, ’58 and ’62 World Cups. Didi has been described as having had superb positional sense and vision from midfield, also being known for his innovation at set-pieces. Didi is recognised as having pioneered the “dry leaf”, a sharply bending and dipping free-kick more recently associated with Ronaldinho and Shunsuke Nakamura.

Didi was also one of the first Brazilian footballers to ply his trade in Europe, moving to Real Madrid for a season in 1959 before moving back to Botafogo, a club he played for in four separate spells during his career. He was a true footballing pioneer and is looked upon as one of the finest Brazilian midfield players of all time.

Ademir is generally regarded as one of the finest strikers to have ever represented Brazil on the international stage and one of the most influential forwards in Brazilian history. Such was his talent, the coaches of Brazil’s domestic clubs constantly struggled to find defensive plans which would contain him, a conundrum which eventually led to the emergence of wing-backs as a regular tactical ploy.

Top scorer at the 1950 World Cup on home turf, Ademir was a consummate finisher, able to shoot with either foot to equally devastating effect. He also had the honour of scoring the first competitive goal at the Maracana, but was part of the team which devastatingly lost out to Uruguay in final of the 1950 tournament. The fact that Ademir never won the World Cup with Brazil is one of football’s great tragedies, but his impact on the game, particularly on the development of defensive tactics through his attacking brilliance, should not be underestimated.

In combination with his namesake Nilton Santos, Djalma Santos recalibrated people’s expectations of full backs and their role in both the tactical blueprint of each and every team which deployed players in the position.

A marauding right-back, Djalma Santos was as much a creator as a defender, a crucial part of the Brazilian sides which won both the 1958 and 1962 World Cups and was also a member of the ’54 and ’66 squads. When he first emerged in the Brazil side Santos was regarded as a set-piece specialist, as the side’s designated penalty taker he scored during the infamous 4-2 quarter-final defeat to Hungary in ’54 but returned four years later as an integral part of the triumphant ’58 squad.

Mauro Ramos, a fashion icon off the field, was one of Brazil’s most elegant central defenders on it and captained his country to victory in the 1962 World Cup having been an established member of the squad for eight years and a veteran of the two previous World Cups.

Mauro was famed for his man-management abilities as a captain, the way in which he got the best out of the likes of Garrincha, Nilton Santos and Vava has long been admired and held up as an ideal in terms of an approach to captaincy at football’s highest level.

Gylmar dos Santos Neves is generally regarded as the greatest Brazilian goalkeeper there has ever been. Fans of Claudio Taffarel may disagree, but Gilmar, who was the first choice ‘keeper in ’58, ’62 and ’66, was the first goalkeeper to win the World Cup twice and must surely be regarded the most consistent gloveman Brazil has ever seen.

Had it not been for Pele, Tostao “the little coin” would probably now be recognised as the greatest Brazilian forward of all time. In combination with Pele, Tostao was one half of one of the world’s greatest ever forward lines and a central figure in the superlative Brazil team of the 1970 World Cup.

Best known for his peerless passing and intelligence on the ball, Tostao racked up huge numbers of assists as well as goals both for his country and his beloved Cruzeiro, for whom he scored an incredible 249 goals in 378 appearances. He also scored at a rate of two goals per game during a highly successful spell at Vasco da Gama before damaging his retina during a game and retiring at the age of 26, very much at the peak of his powers. 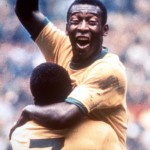 A man who needs little in the way of an introduction, Pele, along with the likes of Diego Maradona and Alfredo Di Stefano, is considered to be one of the greatest talents to have ever graced a football pitch. Blessed with an almost faultless technique, an incomparable eye for goal and superb natural speed and balance, Pele has become the benchmark for all forwards, perhaps even all footballers, and a Brazilian icon and hero.

His career statistics are thoroughly mind-boggling. At Santos, the club he played for from the age of 15, he scored an incredible 474 goals in 438 games over seventeen seasons. For Brazil his record was, considering the higher standards of the international arena, perhaps even more impressive. The 77 goals he scored in 92 appearances and the three World Cup winners medals he won with his country (’58, ’62, ’70) have ensured that he will forever be enshrined as the greatest man to have ever pulled on the yellow and green jersey.