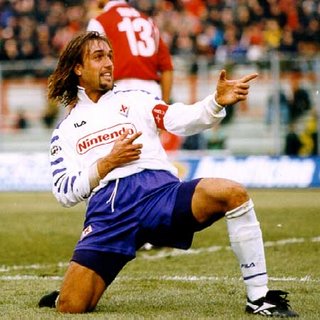 In the words of arguably football’s greatest, Diego Maradona once said; “He was the best striker we ever had here and were never going to see his like again – we’re not going to see anything like him from anyone, no matter what they’re called. For me he was the greatest goal-scorer that I saw in my life“. He was talking about his compatriot and one of football’s most prolific strikers in its history, Gabriel Batistuta.

The Argentine will be revered for his sublime awareness and killer instinct in front of goal. As a striker he was as lethal as they come and his presence alone within starting elevens always offered a deadly impetus in the final third that had his adversaries quaking in fear. He possessed a stunning right-foot that rippled nets all across Argentina and Italy.

Amazingly his career may never have occurred had it not been for his family who urged him to take up the sport as a profession. Gabriel has always been astute on the pitch and his personality somewhat relates off it too as he had aspirations as a youngster to gain a creditable education. Whilst others in Argentina were aspiring to be the next Mario Kempes, Gabriel was more concerned about his future at college rather than kicking a football. Nevertheless his talent as a player was unprecedented leading to Jorge Griffa, the then Newell’s Old Boys’ Youth Team Coach, pulling out all the stops to move him 460km’s south to Rosario and assuring the young prodigy that the club will cover his education whilst he plays. Despite the initial reluctance on the player’s part the deal was concluded and Batistuta never looked back.

La Lepra were champions of Argentina back in 1988 where Batistuta made his debut in the Copa Libertadores Final which Newell’s lost. Despite that initial disappointment his talent continued to blossom and the more experience he gained, the more his all round game began to prosper. He had the knack to elude his markers with ease and find a pocket of space to work into before dispatching a clinical effort that would inevitably rustle the back of football nets up and down the country. Argentine defences were becoming more and more aware of the potent threat and that lead to the nations’ two biggest clubs becoming aware of his credentials.

A devoted Boca Juniors fan, Gabriel made a surprising move to River Plate whom are Los Xeneizes’s biggest rivals. His time at River was brief due to the fallings out he had with coach Daniel Passarella who was Argentina’s World Cup winning captain back in 1978. That lead to a move to his boyhood club Boca and there he became an integral cog of a side that produced some magnificent football. The Bombonera witnessed a magical partnership conjured between their new hero and Diego Latorre whose link up play was thrived upon by his strike partner. Both forged a tremendous understanding of one another’s game and Boca reaped the benefits despite their failure to clinch silverware. Batistuta finished top goal-scorer in 1991 with 20 goals in 29 appearances. Boca won the Apertura championship but ultimately lost out on the official league title to Clausura championship winners and Bati’s old club Newell’s Old Boys in the deciding play-off (The inaugural season where Argentina’s top tier was split into two separate entities with the play-off being abolished straight after Boca’s misfortune).

Batistuta’s bitter taste was quickly swilled as he played a pivotal role that summer in Argentina’s victory in the Copa America within the host country of Chile. He was in fine form and his goals in particular against Brazil and Colombia went a long way in crowning the blue and white stripes South American champions. He finished the tournament’s top goal-scorer which alerted the powerhouses of European football. A move to Serie A materialised with a club that has taken to him as one of their own where he is idolised to this very day, Fiorentina.

A love affair with himself and the club was built over a nine-year period where he bagged an incredible 209 goals in 325 appearances thus becoming the club’s all time leading goal-scorer. He fell immediately in love with the Viola and despite the lack of silverware he was more concerned about adorning the purple strip. His game in Italy evolved as he became better technically and was now able to dispatch free-kicks and execute sublime long-range efforts. His knack to lose his marker and get behind the defence was expertly portrayed.  Despite his lack of pace, his intelligence along with an eye for goal made him near unstoppable at times. He netted 14 goals in his debut season but the following campaign would result in relegation to Serie B despite Bati’s 17 converted efforts. He had the opportunity to seek pastures new and play his trade elsewhere but instead opted to stay with the club and get them back to the dizzy heights of Serie A. He showed a tremendous loyalty to the football club where his ties got stronger.

He explained his decision during a recent documentary on SKY Sports’ Football’s Greatest, emphasising his devotion to the club:

“I just fell in love with the city and I really liked the atmosphere and I said to myself, I’m going to stay here. That was despite the fact that back then big teams from abroad such as Real Madrid and Manchester United were after me on a regular basis.”

His passion for the purple shirt was a glowing testament to the fans who rejoiced at his solidarity. Fiorentina did indeed make their way back into Serie A at the first attempt with Bati being the focal point. His return to Italy’s top flight saw him finish the league’s top scorer with 26 goals whilst creating a record by scoring in eleven consecutive games. The passionate people of Florence who packed into the Stadio Artemio Franchi to witness their idol even constructed a bronze statue of the man himself – as well as naming a star after him. The show of love and respect between the two was – and still is – unbreakable.

His continuous goal rush lead to his nickname; Batigoal. He had become one of the world’s most clinical finishers and despite the continuous interest in his availability he continued to stick with the purple shirt. The challenge of winning a Scudetto with the Florence based club was a burning desire he wanted to achieve.  He confirmed that the aspiration of winning a title with Fiorentina was more appealing than winning half a dozen with an elite entity; “To tell you the truth, that didn’t interest so much. Although they were titles, they were easy to win. They (elite clubs) didn’t have to fight hard to win them or extend themselves slightly so that stopped me from moving. I said no, I’m staying with Fiorentina and I’ll try to win something here because one title with this club is worth more than ten with Milan or Juventus”.

The Scudetto eluded Batigoal in Florence but he did win a Coppa Italia and Supercoppa Italiana in 1996 whilst qualifying for the UEFA Champions League in 1999. A goal in particular against Manchester United on March 15th 2000 at Old Trafford orchestrated everything about his attributes. He did magnificently well to cast the ball under his spell on the turn whilst being pressed by Paul Scholes and Jaap Stam before weaving into a little pocket of space and unleashing a twenty-five yard screamer with that lethal right-foot which nearly ripped Mark Bosnich’s net in two.

That season however ended in mediocre fashion domestically and as he entered his thirties he decided to end his affiliation with Fiorentina and move to AS Roma for 70 billion Italian lira where he finally clinched a Scudetto – in his debut season. He was the focal point of the Giallorossi attack and bagged 20 league goals in 28 appearances and ended the club’s eighteen year wait for the league title.

He netted against his old club Fiorentina in the Stadio Olimpico with a beautiful half-volley just outside the D and immediately closed his eye as his peers embraced him in jubilation. He realised the importance Fiorentina had played in his life – being a huge part of his football persona – and almost burst into tears as the Olimpico’s home support erupted into hysteria.

Internationally with Argentina Batistuta will go down in history as one of the county’s most revered superstars. Although he never won a FIFA World Cup he did win two Copa America’s, a Confederations Cup  and is currently the nation’s highest ever scorer with 56 goals in 76 appearances. His name is also etched in FIFA folklore by being the only man to have scored a hat-trick in two separate World Cups. One being against Greece during USA 94 with the other against Jamaica four years later in France.

A brief spell with Internazionale and a two year stint in Qatar concluded Batigoal’s career. A man who was so dominant in the final third with his predatory nature will undoubtedly go down as one the game’s greatest strikers. For a player of his calibre his CV should be littered with honours and accolades. However, despite a lack of silverware he showed tremendous loyalty and appreciation to Fiorentina and always gave his all for both club and country. A tremendous role model for aspiring strikers in Argentina whose attributes are unparallel.  If the great Diego Maradona believes so, then who can dispute that?