El Clasico part two of the 2014-15 season ends our Super Sunday action as Barcelona look to extend their lead at the top of La Liga with only 10 matches remaining after this weekend.

Luis Enrique’s side head into the weekend’s match after a comfortable win over Manchester City in the UEFA Champions League on Wednesday, whilst Real Madrid had the weekend off having already booked their place into the quarter-finals the previous week.

Barcelona are the league’s, and the world’s form team having won 27 of their last 30 matches in all competitions.

Sergio Busquets returned to training on Thursday to give him a chance of playing in this weekend’s match.

Thomas Vermaelen has been out all season, yet to make his Barcelona debut since a summer move from Arsenal. 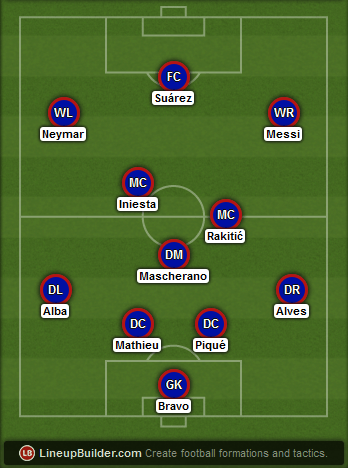 Claudio Bravo in for Marc-André ter Stegen is the way things Barcelona do it in the league. Otherwise we have the same lineup that beat Manchester City at Camp Nou on Wednesday. Sergio Busquets could potentially replace Javier Mascherano in midfield, whilst Xavi and Pedro are an outside chance to start. 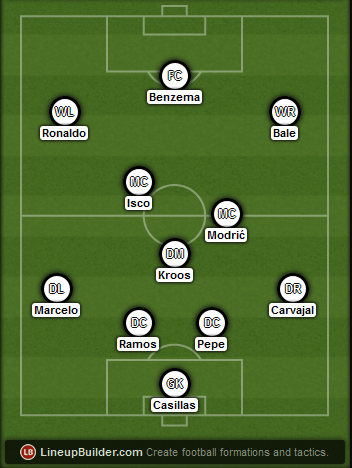 This is Carlo Ancelloti’s preferred side. Iker Casillas and Toni Kroos got a rest in last weekend’s 2-0 victory over Levante and will be fresh for this weekend’s crunch tie. Real Madrid have not be the same team they were during the first half the season, recently losing points against both Villarreal and Athletic Bilbao.

Lionel Messi vs Marcelo
Fresh off of his man of the match performance versus Manchester City and the best player in world football once again right now, Lionel Messi is ready to rip Real Madrid open. He missed a tap in towards the start of the season when Bareclona lead 1-0 at the Bernabéu but with the form he’s in right now you can’t bet against him scoring. Marcelo, Sergio Ramos and the Real Madrid defence are in for a tough afternoon against this front three.

Luis Suárez vs Pepe
Whilst Pepe appears to have sorted out his discipline issues under Carlo Ancelotti you can’t help but think the Portuguese centre-back is going to run the risk of a red card in this match. He’s going to come up one-on-one with Luis Suárez at points in this match and the Uruguayan loves to irritate and torment opponents – will the centre-back bite? Pepe and co also need to be careful not to be the last defender in one-on-one matchups versus Barcelona’s front three and risk a sending off with a last man foul too.

Gareth Bale vs Jordi Alba
Gareth Bale hit back at his critics last weekend with both goals in the 2-0 victory over Levante. The right winger has an opportunity to hurt Barcelona once again as he did in last season’s Copa del Rey final. Jordi Alba loves to bomb forward and does leave himself open at the back. Whilst his pace often gets him out of trouble, Gareth Bale is quick enough to prevent the Spaniard from getting back in position in time. With Karim Benzema and Cristiano Ronaldo as options to supply, the Welsh winger could be Real Madrid’s best chance of avoiding defeat.

50% – Lionel Messi has scored eight of Barcelona’s last 16 goals in all competitions versus Real Madrid.