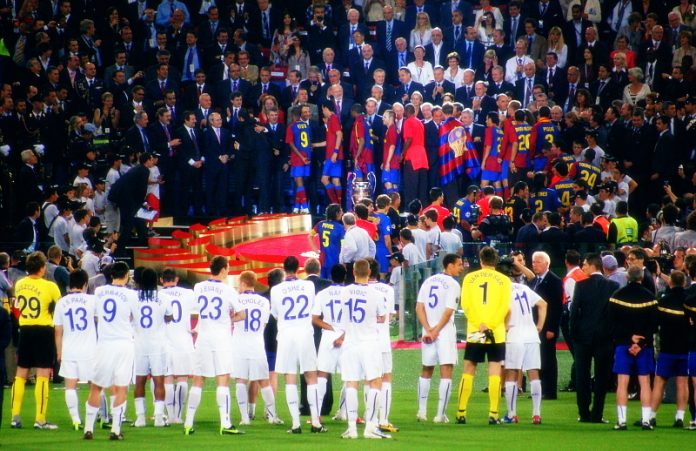 2008/2009 was all-in-all Barcelona’s season. Pep Guardiola led his childhood club to glory like no other manager had done before him.

United on the other hand, weren’t too bad the whole season. They were back again in the UEFA Champions League final to defend the title that they had won last year against Chelsea.

In 2008/09, Manchester United were in a rather easy group with Villarreal, Aalborg and Celtic. Four draws and two wins saw them top the group and move on to the first knockout stage.

They had Jose Mourinho’s Inter Milan in the Round of 16. Julio Cesar saved the day at San Siro but United was too much to handle at the Old Trafford. United went through 2-0 on aggregate.

Porto caused some concerns for Alex Ferguson when they managed a 2-2 draw in Old Trafford in the quarterfinals. But a 1-0 away win guaranteed a place in the semifinal.

Arsenal was the semifinal opponents and United supporters were sure that United have the Gunners in their pocket for this one. United lived up to expectations and a 4-1 aggregate win awarded them a place in the final against the mighty Barcelona.

Barca, however, had a relatively easier start to the Champions League. Sporting, Shakhtar Donetsk and Basel didn’t cause them much trouble in group stages and a 6-3 aggregate win over Lyon in the Round of 16 meant it was all a walk in the park.

The quarterfinal opponents were Jurgen Klinsmann’s Bayern Munich. 4-0 at Nou Camp meant Guardiola’s men could just defend in the away leg. Aggregate score was 5-1.

The semifinal against Chelsea saw a lot of drama as Champions League was closing in on another all-English final. Actually a replay of last year’s final to be exact.

But Andres Iniesta’s late goal in the second leg meant Barca goes through to the final on away goals with the scores tied 1-1 over two legs.

The final saw the beautiful Barca undone the moment of magic from Paul Scholes a year ago in 90 minutes.

Except the first few minutes of attack from the Red Devils, it was mostly one way traffic – the other way.

After a slow start, Barcelona had taken control of possession and Samuel Eto’o struck on the ten minute mark with a close-range near-post shot going just past Edwin van der Sar.

Then as the legs got tired, Barcelona’s young ace Lionel Messi rose between two of the best defenders, Rio Ferdinand and Nemanja Vidic to meet a cross and seal the game 2-0.

Whistle was blown and the Barcelona was crowned the 2009 UEFA Champions League champion.

Back in 08/09, Barcelona had a make-shift defense with Dani Alves and Eric Abidal missing. Yaya Toure was moved back to fill out the central defensive duties as Carles Puyol covered for Alves. Youngster Sergio Busquets was given the opportunity to perform at such a huge stage, so early in his career.

Xavi and Iniesta completed the midfield with Lionel Messi and Thierry Henry as wide forwards and Eto’o up ahead.

Manchester United, to start off with, still had Cristiano Ronaldo and Carlos Tevez. CR started and Tevez was brought on in the 46th minute for Anderson (because unlike in the FIFA game, Anderson can’t take on the prowess of Xavi and Iniesta).

Also van der Sar, Ryan Giggs and Scholes were young-er. Dimitar Berbatov was considered a very expensive goal-scorer. His going rate at that time was something like five or six million a goal.

Since the match hasn’t been played yet, I will not be able to glorify Barcelona even more in a handful of paragraphs. So lets jump to the current squads:

Barcelona squad:
As we have noticed during the El Clasicos that Barcelona lack the depth in their squad. Throwing lots of high-importance fixtures their way seems to be the only way to beat them; as Real Madrid conducted the experiment.

In the final on 28th May, however, we expect that Barcelona will not have that problem.

Samuel Eto’o, Theirry Henry and Yaya Toure might be missing but Gerard Pique will be playing (hopefully) and up front, we have witnessed Pedro to have taken the step up. Also, the addition of David Villa to the ranks will somewhat fill the space Eto’o left behind.

Busquets will be available as well and now he has picked up a couple of years of experience and taken some acting classes.

Manchester United squad:
Squad depth is certainly not the issue with United.

Ronaldo and Tevez might not be here but they have been replaced with Berbatov and Javier Hernandez. Also, Wayne Rooney is coming back to form.

Nani and Antonio Valencia have both done a fine job on the wings. Two players who didn’t take the part in the 2009 final. Nani was on the bench and was left on the bench.

This year Ferguson has a fantastic team. A team full of talent and flair. But the actual question is, will Ferguson’s tactics this time be good enough to overcome Barcelona’s?

One thing that should be learned from the 08/09 final is that if you’re going to attack Barca early then you better as hell score. If they get the ball off you, you’ll be running around like a dog all day.

What else has changed?

In 08/09, Guardiola was new and no one had quite figured it out how to play against Barcelona. It has been three years since and we have seen Barcelona get defeated at the hands of a very few.

But one thing is for sure. Teams are building confidence in what little hope they see of beating Barcelona. They have realized that no matter how well rehearsed and efficient Barcelona are, they can be beaten.

Their terrific form over three seasons is also getting on other people’s nerves topped up with the on-field theatrics of Busquets and Pedro – mainly Busquets.

Alex Ferguson is one of the most experienced and seasoned tactician and with rumors circulating of his retirement, he will definitely want to give fans the Champions League glory to top off the 19th title and rub it in Liverpool’s face a bit more.

And Guardiola knows that very well.

Barcelona had Copenhagen, Rubin Kazan and Panathinaikos in Group D, where they eased through to the Round of 16. The much debatable match against Arsenal ended in a close 4-3 aggregate to Barca’s favor.

The quarterfinal was a rather easy draw, Shakhtar Donetsk were no match for the Catalan giants as they won the two-legged tie 6-1.

The semifinal was a part of the four El Clasicos to be played in 18 days. With Madrid drawing the first and winning the second, it seemed like Mourinho has finally overthrown Barca.

Barcelona won 2-0 at Santiago Bernabeu and drew 1-1 at home. Theatrics from both side saw people flame the two teams and mainly Barcelona between the two legs. I know that doesn’t sound right, but that is what happened.

The away leg surely made the critics silent as Barcelona players stayed on their feet (or tried to) and Madrid players repeatedly got away without getting a second booking.

On the flip side, Manchester United had a relatively tougher group. In Group C, they were joined by Valencia, Rangers and Bursaspor. But it was like a piece of cake.

In the Round of 16, Marseille fell to United 2-1 on aggregate. United won both legs of the quarterfinal against Chelsea and won the tie 3-1.

The semifinal was won before the first whistle blew. Even though Schalke had overcome defending champions Inter Milan but so did Tottenham.

United made the win official right in the first leg away from home by winning 2-0 at Veltins Arena. The two-legged match ended 6-1.

Let me take you back to 2008 UEFA Champions League final. Manchester United vs Chelsea. I won’t talk about the 2007 final because justice was done that day to AC Milan.

In 2009, Barcelona faced Chelsea in a crunching 1-1 draw over two legs and away goals rule deciding the winner. United scored three away goals against Arsenal in their semi. Barca won.

In 2010, even though Bayern Munich had won the Round of 16 (against Fiorentina) and the quarterfinal (against United) on away goals but both the time they managed three away goals. In the semifinal, Bayern won 4-0 over two legs against Lyon. Inter Milan on the other hand had to stop Barcelona from scoring two goals at the Nou Camp. Inter won.

Non-football reference: India beat fierce arch rival Pakistan in the 2011 Cricket World Cup semifinal and went on to win the cup. Like you care, right?

Barcelona have played against Real Madrid in the semifinal and came away as 3-1 winners after being considered slight underdogs in a long, long time. United has had an easy road to the final comparatively. You can argue but you know Schalke starts with a Madrid-reject (so did Inter though).

Prediction: Odds point towards Barcelona taking the trophy again but all I know is that it will be a tightly contested match with Barcelona somehow winning the night.

Lets just say that it will be kind of like Spain vs England.

Disclaimer: Forgive me, I am a Barcelona fan.