Manchester City face the near-impossible task to overturn a 2-1 first leg defeat at the Etihad at the Camp Nou if they’re to represent the Premier League as the only side in the quarter-finals of this season’s UEFA Champions League.

Barcelona could have won the first leg by more than one goal, based on their first half dominance, and Lionel Messi’s missed late penalty and open goal. Luis Enrique’s side have won their last five and 16 of their last 17 in all competitions.

Manuel Pellegrini’s side have lost three of their last four, including their weekend’s disappointing 1-0 loss at Burnley. Sergio Agüero is three games without a goal since his fine finish in the first leg. Yaya Touré’s lack of form has been what’s making the news this week. Defensively, Manchester City have kept only two clean sheets in their last 21 Champions League matches.

Sergio Busquets is out and will be Barcelona’s biggest loss for the second leg. Thomas Vermaelen is out injured but Luis Enrique has had to deal with that all season.

Gaël Clichy is suspended following his dismissal in the first leg. Yaya Touré is back from suspension after missing the home leg. 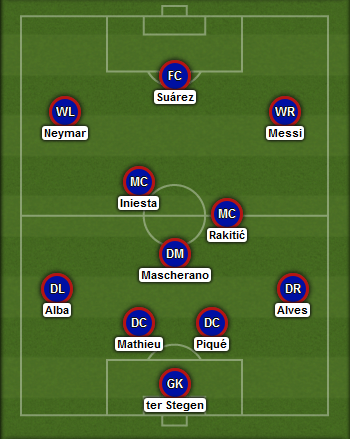 Marc-André ter Stegen has start all seven of Barcelona’s Champions League games and is set to continue in goal this evening. The only change we’re predicting from the first leg is for Javier Mascherano to move up into Busquets position and Jérémy Mathieu can come back in at centre-back.  El Clasico on Sunday, we think Barcelona will come out like they did in the first leg to score a goal or two to put the tie to bed and then the coach can consider resting players in the second half. 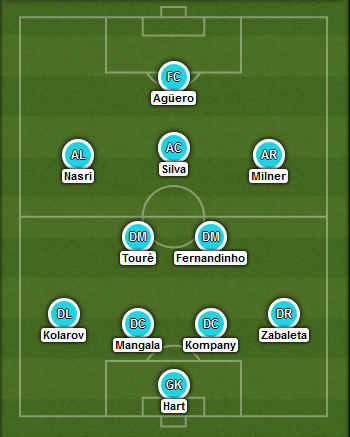 Manuel Pellegrini was criticised for the 4-4-2 formation his side lined up with to face Barcelona last time so we think he’ll revert back into a 4-2-3-1 formation so the additional man in midfield can help win the ball back from the Tiki-taka style that saw them dominate possession in the first half of the first leg.

Lionel Messi vs Eliaquim Mangala
Lionel Messi has found his form in 2015 to say the least and the Argentine was a key player in the first leg, scoring a goal and creating chances before he saw his late penalty saved by Joe Hart. Eliaquim Mangala has struggled to settle in at Manchester City and he can expect a busy game when Messi cuts in from the right wing onto his stronger foot. You can expect Barcelona to score at least once in the second leg – take your pick from the front three as to who will get on the scoresheet.

Luis Suárez vs Vincent Kompany
The former Liverpool striker scored twice in the first leg. Some fortune about the first for sure but a good finish none-the-less. Luis Suárez is in good form and with Manchester City needing to score at least two to progress you can expect gaps to open up the further the games on, That’s where the front three including Suárez can hit them on the break. Even then, they’re capable of opening up the English champions in open play too.

Sergio Agüero vs Barcelona defence
Edin Džeko saw the best chances in the first leg but failed to take any of them. Sergio Agüero scored a good goal that has just about kept them in the tie. If Agüero’s teammates can create a similar number of chances for their striker in Spain then you’d expect the Argentine to get on the scoresheet again.

1.18 – Lionel Messi has scored 40 goals in 34 games in La Liga and the Champions League combined this season – that’s an average of 1.18 goals per game. He’s scored 8 goals in 7 games in this season’s competition.

94% – Barcelona have won 16 of their last 17 games in all competitions and 26 of their last 29. They are on a five-game winning streak in the Champions League after losing their second group game at Paris Saint-Germain.