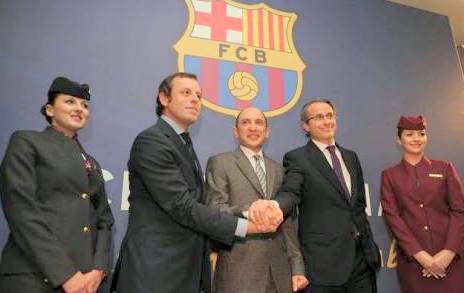 On Monday, the deal was announced and it was unveiled at the club’s Nou Camp stadium. The agreement starts from 1st July, 2013 and it will run for three years, taking over from the club’s previous partnership with the Qatar Foundation.

Barcelona will however keep the UNICEF logo on their kit till 2016, but it will be the first time in their rich 113 years of history, that a corporation will feature as sponsor on the jersey rather than a non-profit charitable organisation.

Barcelona president Sandro Rosell was quoted in the press:

“There’s lots of competition and if we want to be at the very top we need resources.

“There are only a few ways of doing this: TV rights in the future may be less due to the economy. The other way is through charging our members more or selling our facilities, which we don’t want to do.

“We have to look for resources via marketing; it’s the only way forward. That’s what I’d say to the ten per cent [of club members] who voted against this move.”

Qatar Sports Investment signed a €165.5 million five-year deal for Qatar Foundation to appear on the back of the jersey for Barcelona in 2010, with an option of changing the logo if the club opts for it in future.

Barcelona’s economic vice-president Javier Faus clarified any confusion by stating that the club is just maintaining the continuity of the deal, as Qatar Airways are only replacing the Qatar Foundation on the shirt.

Qatar Airways has been voted as the best airways services for the second year running and its CEO Akbar Al Baker insisted the organisation could offer the club and the city bigger exposure through wider networks and better fan package initiatives.