The last week Chelsea midfielder Eden Hazard was embroiled in all sorts of controversy that sparked the possibility of the Belgian winger leaving Stamford Bridge in near future.

Hazard, after Chelsea’s defeat to Atletico Madrid, commented on his team’s style of play, stating Chelsea are more suited to play counter attacking football only. This has led to sharp riposte from his manager who blamed Hazard for Atleti’s opening goal and further criticised him for not being a team player. 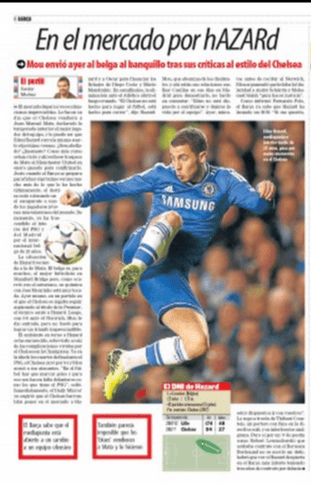 French media speculated about his future with Le 10 sport suggested that Hazard could join Paris Saint Germain, who could be willing to offer Edinson Cavani as part exchange.

Now, Spanish newspaper Mundo Deportivo claims the relationship between Hazard and Mourinho has reached the state of beyond repair and the 23-year-old is keen to find a new club, where his creative style will be more appreciated.

Anyway, Spanish press can get foolishly romantic at times. Mourinho loves to call spade a spade, but that doesn’t mean the relationship between the player and the manager has broken down completely.

The Catalan press believes that Hazard could face the same treatment what Mourinho did with Juan Mata, who was later sold to Manchester United.

Hazard is a class player and the future of Chelsea. Barcelona are also interested in Chelsea’s Belgian goal keeper Thibaut Courtois, who is all set to return to his parent club in the summer, after spending three years on loan with Atletico Madrid.