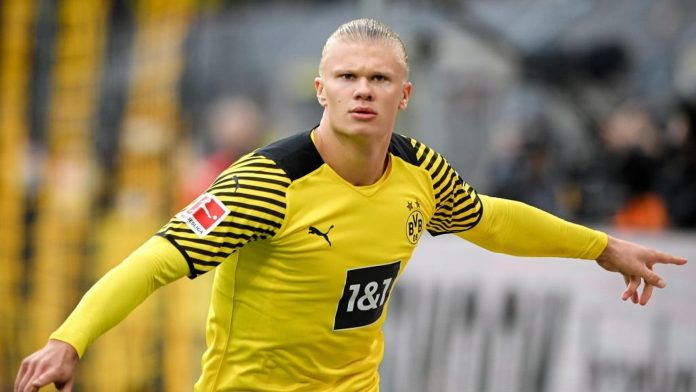 Barcelona are reportedly in a great position to land Erling Haaland this summer with the Norwegian striker set for BVB exit.

A member of the entourage close to Barcelona president Joan Laporta says that Erling Haaland is likely to join the Blaugrana this summer.

The name Lluis Carrasco probably doesn’t ring a bell, unless you’re a fairly knowledgeable Barcelona supporter. However, he had a major role in the return of Joan Laporta to the presidency of the Catalan club, since he was quite simply the campaign manager of the Catalan lawyer. And this weekend, he had quite a few things to say.

While speaking to a local TV station, Carrasco seemed very optimistic about the possibility of Erling Haaland arriving at Camp Nou in the summer transfer window.

“I think Haaland will go to Barcelona. Everyone says he has chosen Real Madrid? Well, they had all said that Dembele would stay too. I know Laporta loves Haaland.”

“Laporta needs a star, a symbol, for this project full of young people. Someone who can dominate European football. We can have a great team, but we need this star. And we have no doubt that the star on the European market is Haaland. Erling is interested in a winning project, and I also know that he wants a project where he will be the leader, Carrasco concluded.

Fans of the Catalan club will still have to wait a few months before knowing whether or not the Norwegian cyborg will join them. But between these new statements and those that Erling Haaland would have made during his vacation in Spain claiming that he wanted to play in La Liga and other small elements still, the pieces of the puzzle have now begun to complement each other.

However, it remains to be seen where the Norwegian would end up given the amount of interest he has garnered.