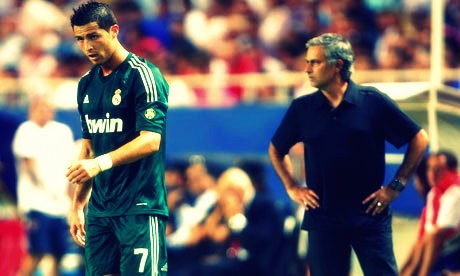 Though it’s fairly early in the season, match day four as of the time of this writing, it already appears as if 2012/2013 La Liga crown is FC Barcelona’s to lose. Under normal circumstances it would’ve been a highly implausible scenario.

For one, in spite of Carles Puyol’s advancing years and Gerard Pique’s frustrating inconsistency, not to mention Javier Mascherano’s aerial handicap, FC Barcelona has once again neglected to acquire a top-class center-half. The off-season saw left-back Jordi Alba and midfielder Alex Song join the ranks of the Blaugrana.

The acquisition of Alba’s services is a sound one, especially in light of Eric Abidal’s health. Nevertheless, the purchase of Alex Song is kind of perplexing. Another midfielder? Really? Two of the three tallest Barcelona players feature in midfield (Sergio Busquets and Alex Song) while vertically challenged Javier Mascherano is forced to play center-half.

For all his guile and industry, El Jefito is just plain ineffective against set-pieces. It’s no coincidence that Barcelona is fairly susceptible to goals from set-pieces. To add insult to injury, Alex Song could miss as a few weeks in January/February due to the African Cup of Nations. Not necessary the business end of the season but it is crunch time nonetheless.

There’s a saying in sports “offence win you games, defense wins you championships”. True that.

During the Pep years the partnership of Carles Puyol and Gerard Pique has been the cornerstone of Barcelona’s unprecedented success. The latter could have even made a case of being the best center-half in all of Europe. But while Lionel Messi more than compensated for the loss of David Villa and Pedro’s indifferent form, Barcelona’s rearguard leaked goals. Not many but in key moments.

Barcelona’s midfield and attack is overloaded with talent. The likes of Sergi Roberto and Gerard Deulofeu looked promising during pre-season whereas the equally as talented Jonathan dos Santos remains on the periphery of the first team.

Tito still has to find a solution for the unnecessary luxury that goes by the name of Cesc Fabregas yet he bought another midfielder anyway.

On the other end of the spectrum Real Madrid ‘only’ purchased Luka Modric and got Michael Essien on loan while selling the likes of Lassana Diarra, Esteban Granero, Sergio Canales, Fernando Gago, Hamit Altintop, releasing Royston Drenthe and loaning out Nuri Sahin.

One could argue that Madrid has significantly depleted its squad but the likes of Diarra & co. have never prominently featured for Mourinho’s Madrid. Yet despite defeating Barcelona in the Super Cup and possessing what is arguably the best bench in all of football, Los Blancos find themselves trailing FC Barcelona by eight points, in the middle of September.

Barcelona did not address their main problem, which is central defense, in a manner that is befitting of a team harbors the ambition of winning all titles on offer. Madrid didn’t have to, Barcelona still have to. On the continental stage Bayern Munich has shrewdly invested in all areas, most notably they bought Javi Martinez and broke the transfer record in the German Bundesliga in the process.

Judging by the current form, or loss thereof, Barcelona look like good value to maintain a healthy advantage over Madrid leading to El Clasico, even accounting for the recent injury of Carles Puyol (it’s not like it wasn’t coming, wasn’t it?), the Blaugrana should navigate through their Champions’ League group fairly unscathed. Real Madrid on the other hand is looking short of confidence and has to host Manchester City, whose bench is probably second only to Madrid’s.

Though Jose Mourinho has already started his mind games by declaring that Manchester City’s fortune can never buy Real Madrid’s titles and history, it is worth noting that Real Madrid has been the second biggest net spender in football since Sheik Mansour’s takeover of Manchester City in 2009.

Barca v Madrid: Over the course of the season

Taking all into account Real Madrid should not find themselves in this situation. They have arguably made all the right decisions throughout the off-season, trimmed the squad of unnecessary and unwanted fringe players, improved the one area that needed an upgrade and avoided injuries to key players. Still, Los Blancos’ season could already be derailed by the time the next Clasico is to be played.

Eric Abidal is still recovering; Carles Puyol is injured once more, as are Alexis Sanchez and Andres Iniesta while Jordi Alba is sick. Apart from Jordi Alba, FC Barcelona did not make any wise investments but they are better positioned than Real Madrid and have drawn the more favorable Champions’ League group.

You can follow the author of this article, Adi Oula Sebastian, on Twitter @JubeiKibagame. He is a die-hard Culé.