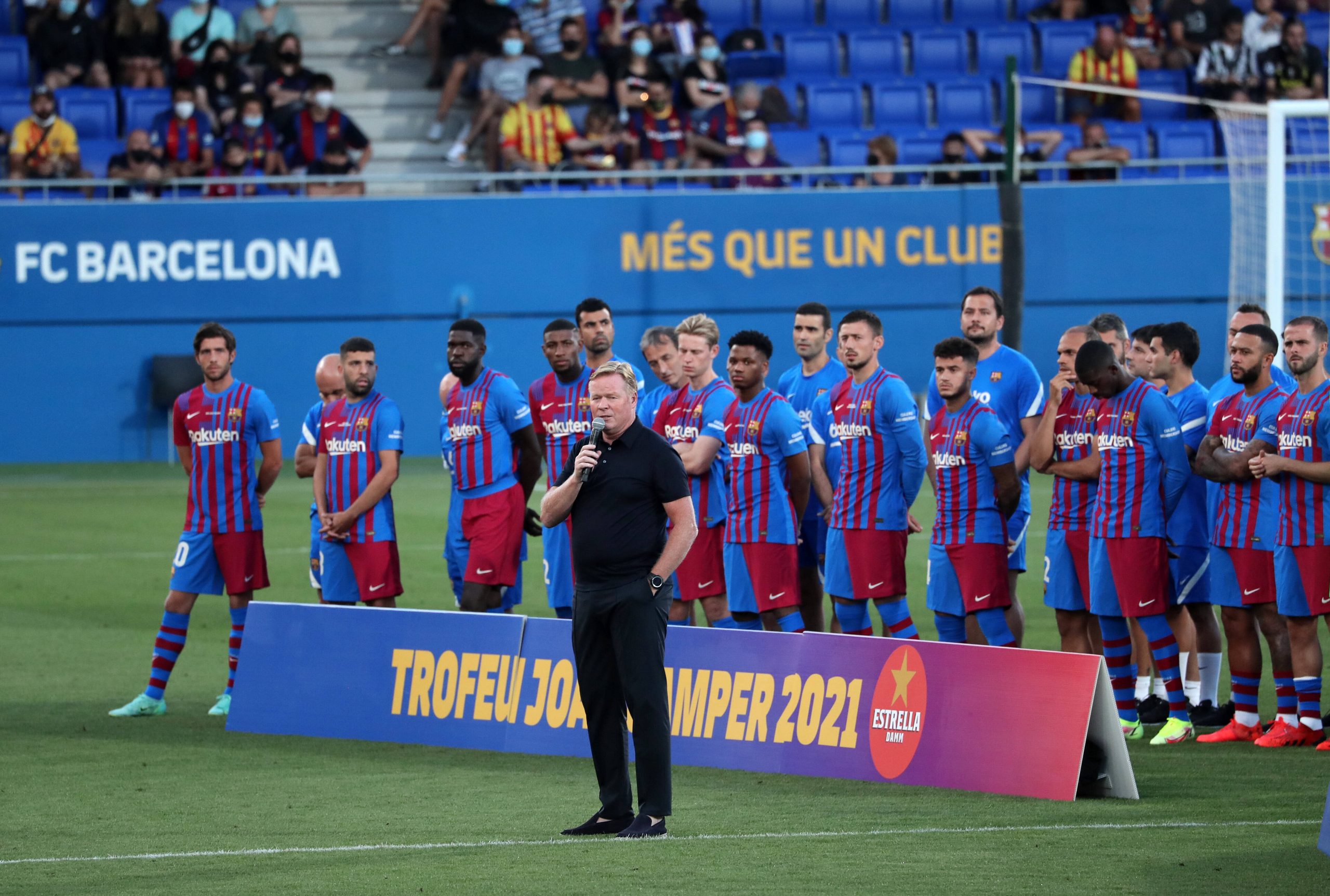 The 2021/22 La Liga season is just around the corner as Barcelona prepare to conquer the league without their iconic figure.

After a slightly chaotic 2020/21 season, Barcelona have experienced a nightmare this summer as they said goodbye to their standout forward Lionel Messi.

The footballing world was hit by an earthquake of epic proportions on August 5 as Barca announced their talisman won’t be staying at the club next season.

The loss of the six-time Ballon d’Or winner only a couple of weeks ahead of the new campaign gives Barca almost no time to recover.

But can the Catalans shrug off the stress and shine without their long-serving stalwart?

Let’s go through that step-by-step.

Can Ronald Koeman win his first league title outside the Netherlands?

It has been 17 years since Ronald Koeman last won his last league title, having led Ajax to a comfortable Eredivise success in 2003/04.

Since leaving Amsterdam, the Dutchman has been wandering between four countries without making any notable success.

In his first season at Barcelona, the 58-year-old managed to wrap up the Copa del Rey crown and briefly gave the impression of keeping his side in the La Liga title race.

However, an utterly disappointing campaign culminated with another dismal European defeat and an underwhelming third-place finish in La Liga.

Koeman will be keen to turn his fortunes around in 2021/22, and a flying start could be essential.

His maiden La Liga campaign in Barcelona’s dugout commenced with four losses in the opening ten league matches, a poor start that came back to haunt him eventually.

A frustrating win rate of 57.89% at Camp Nou was another reason Koeman’s bid to land his first league trophy away from his homeland came a cropper.

With fans back in attendance at Camp Nou after the relaxing of Covid-19 restrictions, the Dutchman will hope to improve his side’s home form next term.

Who will carry the scoring burden in Messi’s absence?

Except for a massive psychological blow, Messi’s departure could have devastating consequences on the pitch.

It is hard to remember Barcelona’s set-up without the Argentina captain.

Messi made sure to put his stamp on the Catalans in a way we are still trying to comprehend.

A leader, friend, teammate, rock, genius, game-changer, there are so many words to describe the 34-year-old’s role at Camp Nou.

And now he is gone. The man who consistently delivered 30+ goals per season is no longer in the picture.

Despite failing to win the title, Barcelona completed the 2020/21 La Liga campaign with 85 goals, at least 18 more than any other side.

Can anyone replace him?

Antoine Griezmann made significant progress during his second season at the club, but he was still nowhere near the Argentine’s numbers.

Ousmane Dembele’s proneness to injuries continues to hinder his development, with the Frenchman expected to miss a large portion of the opening stage of the season due to another physical setback.

Now, Barcelona have captured Sergio Aguero, who ran down his contract at Manchester City.

The 33-year-old carries a reputation as one of the most prolific scorers the Premier League has ever seen, but his fitness condition remains questionable.

Aguero endured an injury-riddled 2020/21 season at the Etihad, making just 12 top-flight appearances, and he has yet to regain full fitness.

His staggering numbers at City are encouraging, but the aim is to keep him safe and sound so he can work his magic.

That means Barcelona will have to turn to Memphis Depay, who has hit the ground running since first putting the Blaugrana shirt on against Girona on July 24.

The Dutchman has found the net in three of his four warm-up appearances for the Catalan juggernauts, maintaining his last season’s impressive form.

His overall form in France was nothing short of outstanding, as he developed from a Manchester United flop to one of the deadliest forwards in Europe’s top-five leagues.

How could Messi’s departure affect other star players?

Shifting some fringe players with massive incomes was crucial to Barcelona’s hopes of retaining Messi beyond the summer.

Despite the club’s utmost effort to offload Philippe Coutinho and Griezmann, both players have stayed on, which came at Messi’s expense.

Now, Camp Nou has quite a potential to become a toxic place for the players who denied the supporters the privilege of watching the Argentine magician for at least another year.

So those who refused to make way might end up on the wrong end of the fans’ rage.

A wave of insults has already been unleashed towards some Barcelona players, whom the supporters found guilty of Messi’s departure.

If this trend goes on, some players could soon find their lives at Camp Nou untenable, which can jeopardise the team’s hopes of conquering Spain’s top-flight next term.

One of the main reasons behind the ex-Manchester City forward’s decision to switch to La Liga was to play with his long-term friend.

Some sources have even gone as far as to claim Aguero is already seeking a way out of Barcelona.

Koeman has been quick to deny such reports.

“It is a lie that Aguero wants to leave,” Koeman told TV3 (via Today). “He has signed with Barca and is very excited,” he said.

However, there is ongoing unrest at Camp Nou.

It is now up to Koeman to find a way to motivate his lads ahead of the challenging season.

The top-four finish should never be a subject of discussion when it comes to Barcelona. That is always well within their grasp.

But even without Messi, the Catalans still have plenty of quality in the squad to be serious title challengers.

President Joan Laporta has done a great job to inject fresh blood in the shape of Aguero, Depay and Eric Garcia into an otherwise ageing squad.

There is no doubt Barcelona will be aiming for the crown. With some wind in their sails, they may well get there.

Although the odds are heavily stacked against them now, football often does not follow the script.

Surprises are possible, and Barcelona have what it takes to defy the odds.