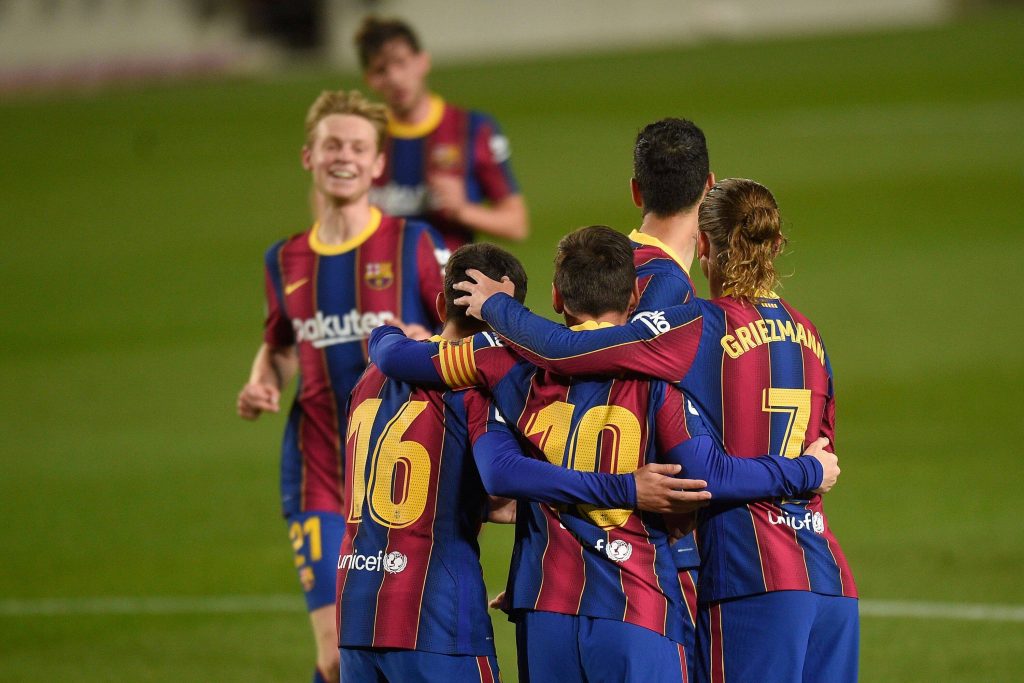 The last year or so has been a rollercoaster ride for Barcelona.

On top of this, they suffered more Champions League humiliation at the hands of Paris Saint-Germain but ended their mini trophy drought in the Copa del Rey.

Throughout the season, Messi got 38 goals and 12 assists in all competitions. But that only tells half the story.

The Argentine does so much outside of goals and assists. It’s almost impossible to comprehend without watching week in week out.

If any other player was producing this level of performance, they’d be scooping every individual award available to them.

However, this is Messi we’re talking about. For him, this is an underwhelming campaign. And yet, he’s still been better than everyone else.

Barcelona’s run to the Copa del Rey was a wild ride. They needed extra time to knock out third-tier Cornella, then had to come from behind to progress past Rayo Vallecano.

In the quarter-finals, they looked certain to go out when they found themselves 2-0 down to Granada with less than five minutes remaining. However, two late goals took the game to extra time, and they ended up winning 5-3.

Once again, they looked down and out after losing the first leg of the semi-final against Sevilla 2-0.

But a second leg comeback which included a penalty save by Marc-Andre ter Stegen and a last-gasp Gerard Pique equaliser saw them reach the final.

Thankfully, it was a final with fewer nervous moments, as the Catalan giants strolled to a victory with a fabulous second-half performance.

Antoine Griezmann opened the scoring from Frenkie de Jong’s cross, and the Dutchman added a second not long after.

Messi scored a brilliant third to put the game beyond all doubt, and he notched a second to make it 4-0.

The victory put an end to the short trophy drought that the club had been going through, having failed to lift any silverware since 2019.

There are a lot of games that could’ve gone here. Two El Clasico defeats, the Champions League humiliations against Juventus and PSG, both fixtures against Cadiz. But we’ve opted for their shock home loss to Granada.

With six games remaining, Barcelona sat in the driving seat in the title race. They know that 16 points from these outings will see them complete the domestic double.

They had dropped just five points from their last 17 league games. This was a huge opportunity.

The hosts started the game in ideal fashion, taking the lead when Griezmann set up Messi. For the opening hour, it seemed like it was just a matter of time before they doubled their lead.

But this isn’t how things panned out. Darwin Machis netted an equaliser against the run of play, and Jorge Molina bagged another for Granada with ten minutes remaining. These were their only two shots on target all game.

Even a draw would have been enough to keep the title race in Barcelona’s hands. But a defeat meant they were relying on other results.

The loss sparked a dip in form going into the closing stages, and they won just two of their remaining five fixtures, ending up seven points off the top.

Barcelona are notoriously in a lot of debt right now, which has hampered their ability to attract world-class talent to the club.

Given this debt, the decision to spend €60 million on a 30-year-old Miralem Pjanic seems even more bizarre while sending the much younger Arthur in the opposite direction. The Bosnian has not made an impact at Camp Nou.

Francisco Trincao is another player who arrived for a decent fee who has struggled somewhat. The youngster has shown flashes of potential but has rarely been able to produce the goods consistently.

With Ansu Fati set to return from injury and Memphis Depay expected to sign for free, the winger may find regular game time hard to come by.

But there have been some successful incomings. Pedri has established himself as one of the world’s most promising teenagers, while Sergino Dest has also enjoyed a solid debut campaign.

But the big mistake of the transfer window was selling Luis Suarez to Atletico Madrid.

It wasn’t necessarily the wrong decision to let go of Suarez. In his last two seasons at Barcelona, he was clearly not the player he once was.

However, to let him go to a direct title rival on the cheap without signing a replacement was just plain stupid. The Uruguayan ended up firing Diego Simeone’s men to the title, scoring 21 league goals.

Ernesto Valverde won things but wasn’t incredibly popular with the fans at Barcelona. He was replaced by Quique Setien, who was nothing short of a disaster. Ronald Koeman didn’t have a whole lot to contend with.

In the first few months, it seemed like the former Everton boss was even worse than his predecessors. However, a change of system for 2021 saw a huge improvement and a piece of silverware.

But is it good enough to keep him in the job? There have been rumours that president Joan Laporta is seeking an alternative, and his recent comments have done little to quash the speculation.

It’s been a mixed season for Barcelona.

After their nightmare start to the league campaign, to get themselves back into the title race shows some progress.

However, once it had fallen into their hands, they let it slip, and that will be hugely disappointing.

Another Champions League humbling against PSG has also left a huge stain on the last year.

It’s the fourth successive year that La Blaugrana have suffered an embarrassing exit from Europe following the disasters against Roma, Liverpool, and Bayern Munich.

But they can take pride from their Copa del Rey showing. Having looked on course for elimination several times, they showed enough character to keep fighting and eventually win the competition.

With their debt still hanging over them, a return to the elite next term seems unlikely.

However, with the right additions, they can get themselves back to the top of La Liga.

Read also: Barcelona confident of securing Premier League duo within the next week.