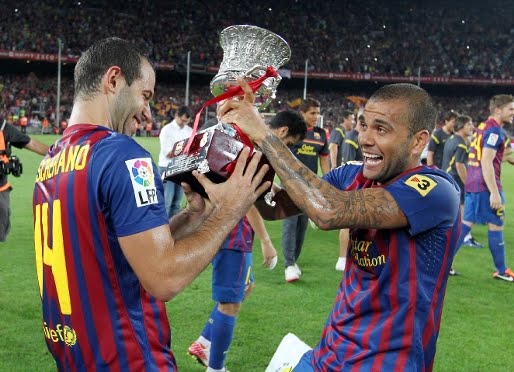 FC Barcelona’s long-serving full back Dani Alves looks poised to leave Camp Nou this summer after reports emerging that the Brazilian is close to joining Serie A champions Juventus on a three-year deal.

The 33-year-old joined the Catalan club from Sevilla in a £15 million move eight years ago in what was the first transfer of Pep Guardiola’s era.

Alves has one year left on his two-year deal with the Spanish champions but is expected to leave on a free transfer with Barcelona saving around £5.3 million off the player’s wages.

Barcelona signed Aleix Vidal last summer to replace the likely-departing Alves only for the Brazilian to make a sensational U-turn and pen down a new two-year deal.

The Catalan club may face defensive turmoil next season with club’s defensive chief Javier Mascherano also reportedly set to follow the footsteps of Alves and join the Turin club.

Juventus are said to have held talks with the Argentine defender and are close to luring the former Liverpool star as well.

Arsenal full back Hector Berellin has been immediately linked with a move to Barcelona after another impressive season at the Emirates.