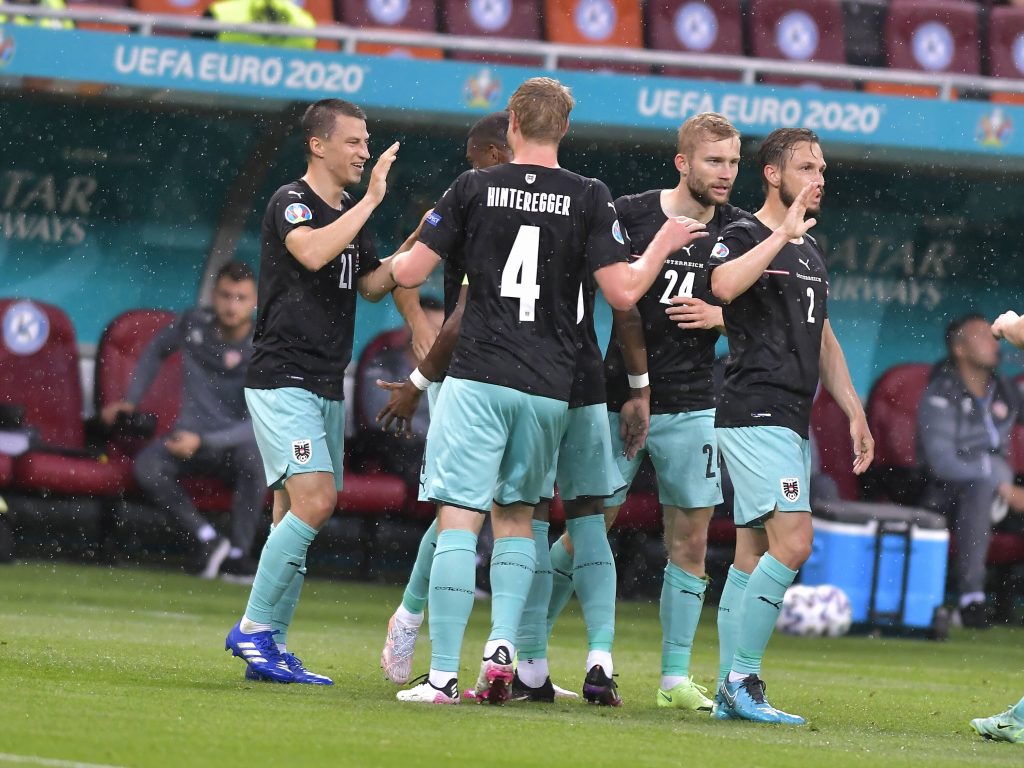 It was a strong start from Austria, who got on the front foot early on. In the 18th minute, their pressure paid off.

Marcel Sabitzer played a brilliant pass to the back post for fellow Bundesliga man Stefan Lainer. The full-back guided his volley into the far corner.

The Austrians continued to dominate, with Sabitzer once again the architect. The RB Leipzig midfielder put in another cross, this time for Sasa Kalajdzic, but the forward’s finish was disappointing.

However, North Macedonia were not deterred, and the underdogs managed to find an equaliser in admittedly fortunate circumstances.

After a mix up in the Austria backline, goalkeeper Daniel Bachmann seemed to have control of the situation.

But the recently promoted stopper spilt the ball straight to the feet of Goran Pandev, who slotted into an empty net.

The second half began in end-to-end fashion, with both sides having opportunities to take the lead.

Enis Bardhi played an excellent ball to Boban Nikolov, but Bachmann was out to smother the right-back.

Ezgjan Alioski also played a wonderful pass into Eljif Elmas, but the Napoli man was smothered by David Alaba after a poor first touch.

Down at the other end, goalkeeper Stole Dimitrievski made a brilliant save to deny substitute Michael Gregoritsch with a flicked header.

But Gregoritsch was not to be denied a second time, as Austria retook the lead in the closing staged.

Star man Alaba swung in a perfect cross to the near post for the 27-year-old to divert home.

It was a comfortable final ten for Franco Foda’s men, who later added a third – and it was another substitute who got it.

Konrad Laimer’s flick over the top found Marko Arnautovic, and the former West Ham United forward showed great composure to round the goalkeeper and slot into an empty net, making the score 3-1.

Despite the defeat, North Macedonia can keep their heads held high after a spirited performance.

Austria get a vital three points in their bid to reach the knockout stage, with a tough test against Netherlands coming up.

Daniel Bachmann (5/10) – Responsible for Pandev’s goal. Somewhat redeemed himself with a great challenge to deny Nikolov.

Aleksandar Dragovic (/10) – Had a decent first half. Came off at half time after catching an arm in the face.

David Alaba (8/10) *MOTM* – Rather unsurprisingly, the best player on the pitch. A calm head at the back, and then put in a deadly cross to put Austria ahead.

Martin Hinteregger (5/10) – Made a complete mess of a clearance in the lead up to Pandev’s goal.

Andreas Ulmer (6/10) – Didn’t show as much attacking threat as Lainer down the opposite side. Solid, but unspectacular.

Christoph Baumgartner (6/10) – A solid performance but did little to stand out. Substituted on 57 minutes.

Konrad Laimer (7/10) – Helped his side dominate possession and got a fantastic assist for Arnautovic’s goal.

Xaver Schlager (6/10) – The weakest of Austria’s midfield. May need to step it up if he hopes to keep his place.

Marcel Sabitzer (7/10) – Dominated the early stages with a brilliant assist for Lainer and could have had another for Kalajdzic. Didn’t do much of note in the second half.

Sasa Kalajdzic (5/10) – A threat from crosses but was well handled by the defence before being subbed. Missed a good chance to make it 2-0.

Stole Dimitrievski (7/10) – Came for every cross, which was vital to nullifying the threat of Kalajdzic. Made one excellent save but should have done better for the second goal.

Boban Nikolov (6/10) – Defended reasonably well and came close to scoring just before being subbed off.

Stefan Ristovski (6/10) – Can’t be blamed for any of the goals. A respectable first outing.

Visar Musliu (6/10) – Had a reasonably good game at the back, making a few tackles and blocks.

Ezgjan Alioski (5/10) – Played a couple of excellent balls into the box but was badly caught out for Lainer’s goal.

Enis Bardhi (8/10) – A possible surprise package in this tournament. Looked very tidy on the ball and almost got an excellent assist.

Arijan Ademi (6/10) – Put himself about in midfield, but far from a perfect performance.

Eljif Elmas (6/10) – A few nice touches in the middle of the park. A poor touch let him down when well placed.

Goran Pandev (7/10) – Showed great anticipation and composure for his goal. A good game from the veteran.

Aleksandar Trajkovski (6/10) – Excellent work rate and bravery in the lead up to the goal. Lost the ball too often.