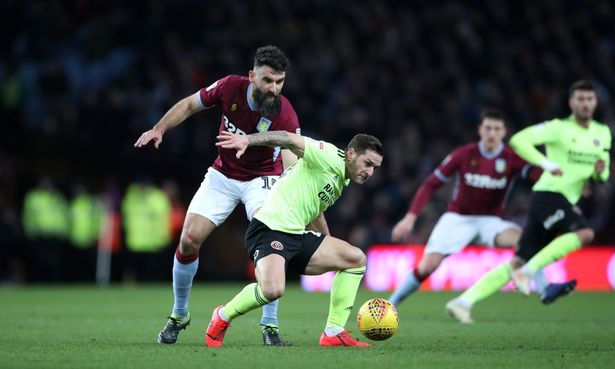 Aston Villa rescued a 3-3 draw against Sheffield United in the Championship last night.

Dean Smith’s men did extremely well to fight back from 3-0 down to secure a point in front of the home fans.

Three goals in the last twelve minutes turned the game on its head.

Billy Sharp hit a memorable hattrick to put Sheffield United in the lead with just eight minutes left. However, the likes of Tyrone Mings, Tammy Abraham and Andre Green scored in quick succession for the hosts.

Despite not managing to win, the result will have given Villa enormous confidence and belief. The fans will be delighted to see the fighting mentality from the players as well.

Overall, Smith will be unhappy with the performance of his players. The likes of Jedinak had an abysmal outing.

The Aston Villa defensive midfielder struggled to break down the play at the heart of the midfield and he also failed to shield the back four.

Aston Villa fans have taken to Twitter to share their thoughts on the 34-year-old’s performance last night.

Who’s idea was it to put jedinak back in the team, he’s shocking!!

My god jedinak has been pants.

Hourihane and Jedinak are appalling

Glenn Whelan HAS to start against Brentford. Jedinak was truly dreadful and Glenn made a huge difference, winning the ball, passing it well and giving other players a much needed rollocking. #avfc

Jedinak looks like a Sunday league player. Terrible. Hopefully Smith is ruthless and takes him off. Kodjia too. Thor and Green on please Deano