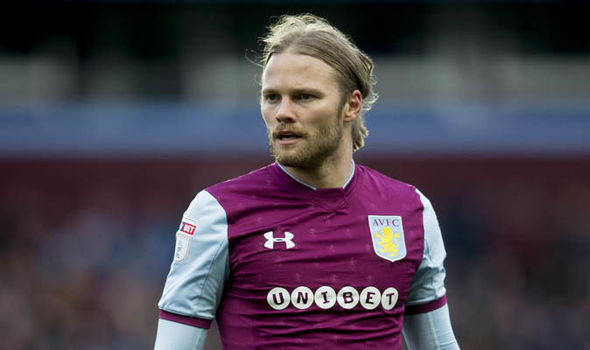 According to reports from the Birmingham Mail, Aston Villa midfielder Birkir Bjarnason rejected offers to leave the club in the January transfer window.

The Iceland midfielder was wanted by Turkish club Fenerbahce, but he was desperate to fight for his place at Villa. The report claims that he wasn’t interested in leaving the club.

Villa were trying to move him on due to fears around Financial Fair Play. He is one of the high earners at the club, and is on £30k-a-week wages.

The 30-year-old has made 11 starts in the Championship and another five appearances have come from the bench. He has scored two goals as well, but has hardly featured under Dean Smith.

Some Villa fans have taken to social networking site Twitter to express their reaction on the player. Many believe that he is on a high pay package and that’s why the club should let him go.

Agreed, think that’s a point many miss. If we want to be sustainable, players’ contacts need to reflect their value to the team. Lansbury is another one we may want to look at offloading.

Stuck around for the wages.

He should have left.

he will be off in the summer for sure

Doesn’t get many chances, but doesn’t do enough when he does.

Admire the desire but we’d be better off cashing in IMHO. Still not sure what his position is as he’s been tried in many and not looked great in any

He is a very good player and there won’t be shortage of offers for him in the summer transfer window.