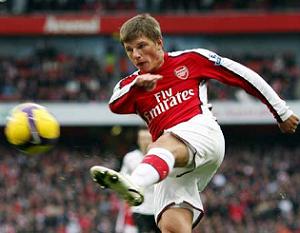 Arsenal hosts Burnley in the English Premier League on Saturday, March 6, 2010 with a chance to move onto first or second place in the table with a win.

This is a match-up of one of the best (if not the best) attacking teams in the Premiership versus the worst defensive team. Injuries will be a concern for Arsenal will be without Sol Campbell, William Gallas, and Robin Van Persie are unavailale. There is good news on the injury front of the Gunners as Andrey Arshavin, Denilson, and Abou Diaby will be returning from injury. Burnley are without Chris McCann and Steve Caldwell but do have Graham Alexander returning from a calf injury.

The two teams played to a 1-1 draw in December but Saturday’s match will a different outcome. Arsenal will have most of its top players available and Burnley struggle to defend on the road. A draw or win is possible by Burnley it would definitely one of the more shocking results of the season. Arsenal has struggled against the top clubs but generally performed well against the teams in the lower half of the table.

Arsenal will have no trouble and win 4-0.

You can watch Arsenal v Burnley live online as well as dozens of other Premier League and European football games. Read our live Premier League football page for more details.