Anderson Luis de Abreu Olibeira and LuÃ­s Carlos Almeida da Cunha (Anderson and Nani to you and me) are two of the brightest young prospects at Manchester United today. They have their admirers and equally, their detractors as well.

Manchester United fans will point to the Tottenham and Arsenal games last season as proof of what Nani can accomplish, as well as Anderson’s duels with Steven Gerrard and Cesc Fabregas. Opposition fans will undoubtedly point to Nani’s inability to link up with his team mates and Anderson’s lack of goals.

But beyond the base ‘for United, anti United’ arguments, the question remains: What are Anderson and Nani capable of and will they be able to fulfill their potential? 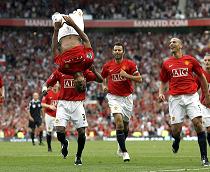 Nani is often compared to Cristiano Ronaldo and there are similarities in their first seasons at Manchester United – the flashes of brilliance, the poor decision-making that results in Nani frustratingly picking the wrong pass (or shooting instead of passing), the self-confidence, the technical ability and most importantly, the same willingness to improve and to keep fighting till the end.

Most significantly though, he doesn’t share Cristiano Ronaldo’s height or good looks. The lack of inches will mean that he will stay as a more orthodox winger (and as a result a lot will depend on how his crossing and medium to long range passing improves) and the lack of looks will keep the media pressure off him a bit and give him the room he needs to improve as a player.

He has the quality, it’s up to him and his coaching staff to ensure that he fulfills that potential. It will take another couple of years before we see the sort of consistency we’ve come to expect from Ronaldo and even then that might be too much to expect, but one has to be realistic: If Nani can give Manchester United a lifetime of quality, reliable service on the wings, he will be well worth the investment.

Anderson and his shooting boots 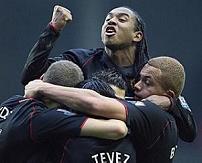 Anderson’s admirers point to his indomitable fighting spirit. Anderson’s detractors point to the lack of tangible impact he makes on games, especially the lack of goals. Both are correct, and that is why, even if you allow for Nani’s frustrating mistakes, Anderson’s progress is the one that is more worrying for a United fan.

Man to man, he can keep up with any player. But where players like Fabregas excel is in finding spaces where there are none and controlling a game when outnumbered, and this is where Anderson fails. On the European stage Anderson has often been outwitted by the opposition midfield content on passing the ball around him. Unless he improves his positioning, and learns to read the game better (and thus impose himself on the game instead of a single player), he will not get to a level deserving of his talents.

Then there’s the (lack of) goalscoring and in this aspect, he is a bit like Rooney in the sense that he has focused more on the personal aspect of the game as opposed to honing his finer skills (dominating a game, clinical finishing, etc). Both are fighters and great team-players, but both can be so much more if they worked on certain aspects of their games.

There’s still time with Anderson – it’s easy to forget that he’s just 20 and that Messi and Fabregas are the outstanding exceptions and not the rule in football (remember how frustrating Gerrard was at 20?).

Anderson and Nani vs Rest of the World

Two talented young footballers with heavy price tags and heavier expectations. There have been a few unfair comparisons, but in my view these two should be judged either in a few years time or lined up along with their contemporaries (age and experience) and measured as such. For me they are still in the top 10 for their positions at the U21 level and that alone should be good enough.

Dazzled by the brilliance of Messi and the maturity of Fabregas (both have their flaws, if you bother to look away from their shining talents), football fans often forget that a player is not judged at 18 or 21 or 25 – he’s judged at the end of his career when the years spent on the football pitch are weighed and measured in statistics and the intangible impact he had on his team’s successes. Let’s not confuse present ability with the sum of a player’s whole career – there enough time for them to prove you wrong or worse, prove you right.

How do you rate Anderson and Nani, and do you think they will live up to the expectations placed on them?