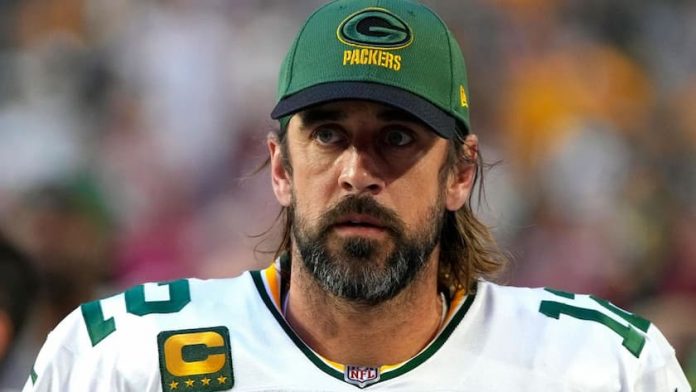 Rodgers struggled to lead the offense throughout the game and only managed to get them firing in the second half, after scoring zero points in the first half of Sunday afternoon’s game.

The Packers ended up losing the game 23-7 resulting in rough viewing for their fans. Rodgers put the loss down to too many mental mistakes and following the game he said: “Obviously, it’d be great to have a 75-yard touchdown to start the game, but drops are going to happen. It’s part of the game.

“It’s the mental stuff that we just can’t have because we’re hurting ourselves. Whether we’re going the wrong way on a block or missing a protection something or missing a hot (route) or not running the right route (at) the right depth, there was just too many mental mistakes.”

It looked like Rodgers mental state wasn’t at its best either during the game, with The Fox cameras capturing an outburst on the sideline after yet another failed drive.

Aaron Rodgers showing some frustration on the sideline. pic.twitter.com/YXfuKilYPN

However, on the other side of the pitch the Minnesota Vikings had an outstanding opening fixture with WR Justin Jefferson scoring a career-best 184 receiving yards.

Jefferson had 9 receptions for 184 yards and two touchdowns, but it was the nature of how he received the ball which was astonishing. The WR gained 138 of his receiving yards on plays when he had at least 3.0 yards of separation, which Packers fans will be looking to blame their defense for.

The Vikings were playing their first game in their new coach Kevin O’Connell’s scheme, and this meant Jefferson was lined up all over the field making it difficult for the Packers defense to track him.

It is a long season and Rodger’s will be hoping the Packers still have time to improve their offense. That first game did nothing for fans optimism, who went on social media to show their dismay.

Aaron Rodgers next time the Packers are on offense: pic.twitter.com/6CPDuva8B7