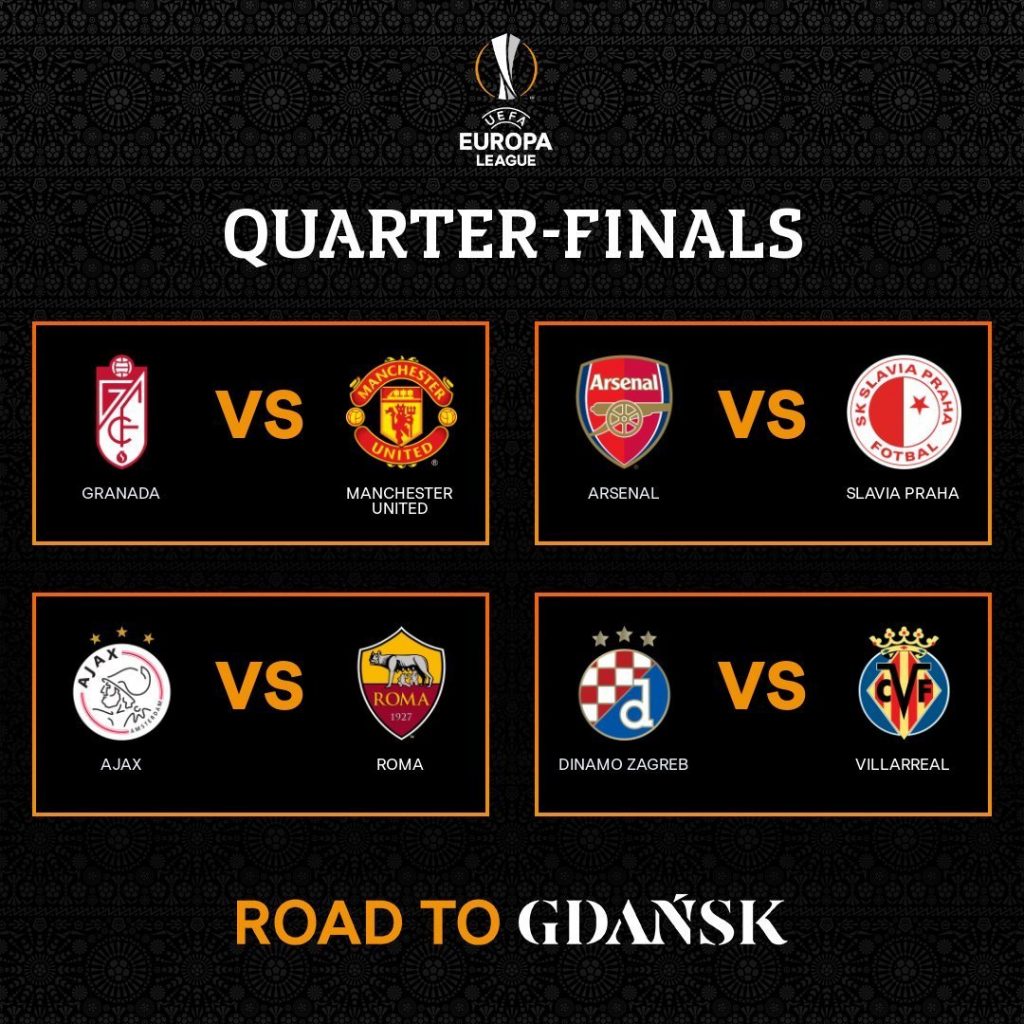 After an enthralling round of Europa League ties, we’ve reached our final eight.

Dinamo Zagreb pulled off an incredible comeback to eliminate Tottenham Hotspur, Paul Pogba proved his worth with a fantastic winner at the San Siro, Steven Gerrard’s Rangers crashed out – it’s been an eventful week in the Europa League.

What’s up next? The quarter-finals and there are some tidy looking fixtures. Ajax face Roma, Arsenal compete with Slavia Prague, Dinamo Zagreb oppose Villarreal, and Granada are up against Manchester United.

In anticipation of these fixtures, here are the previous meetings between these clubs.

Back when the Champions League was really strange and had two group stages, Ajax and Roma faced each other in the second group stage of the 2002/03 season, being drawn in the same group as Arsenal and Valencia.

The first meeting was one for the celebrities, with no fewer than three footballing icons finding the net during the match.

Opening the scoring was a young Zlatan Ibrahimovic following a goalkeeping error. The Dutch side made it two after the break with a curling beauty by Finnish midfielder Jari Litmanen.

Roma clawed one back with a header from Argentinian forward Gabriel Batistuta, but Ajax held out for the win.

The reverse fixture was not quite so star-studded but equally as important. Roma needed a win to keep their European hopes alive but were unable to clinch the three points.

Andy van der Meyde gave the visiting side the lead in the first minute, but Antonio Cassano hit back for La Lupa. There were no further goals, meaning that Ajax progressed and Roma were eliminated.

These two have only ever faced each other twice in their histories, and they are not occasions that Slavia Prague will want to remember.

In the 2007/08 Champions League season, the two sides were drawn in the same group alongside Sevilla and Steaua Bucuresti.

The first meeting was a comfortable affair for the Gunners, who raced into a 3-0 lead before half time. Cesc Fabregas and Theo Walcott netted either side of a David Hubacek own goal.

Things only got worse after the break for the visitors. Fabregas and Walcott notched again, and Alexander Hleb and Nicklas Bendtner also got themselves on the scoresheet as the game finished 7-0.

The game in Prague was far milder, with neither side managing to find the net. Arsenal ended the group in second place, while Slavia Prague finished third and were relegated to the Europa League.

Dinamo Zagreb and Villarreal have also faced each other twice, being drawn in the same Europa League group in 2010/11 with Club Brugge and PAOK.

It was the Croatians who took the three points from the first meeting. Ante Rukavina gave Dinamo Zagreb an early lead, and they secured the win with a late goal from Brazilian-born midfielder Sammir.

But the Yellow Submarine were able to get their revenge at home, comfortably winning the second fixture 3-0. Giuseppe Rossi opened the scoring from the spot, and Marco Ruben made it two in the second half. A late third from Rossi completed the rout for the hosts.

Villarreal finished top of the group and progressed to the knockouts, while Dinamo Zagreb were eliminated, having placed in third below PAOK.

Next month’s quarter-finals will be the first time that Granada and Manchester United face each other.

The Red Devils will go into the tie as heavy favourites to progress and the favourites to lift the trophy as per FiveThirtyEight. They currently sit in second place in the Premier League table, 14 points off runaway leaders Manchester City.

Ole Gunnar Solskjaer’s men have had mixed success in knockout tournaments this year. They suffered a humiliating group-stage exit in the Champions League and were knocked out of the Carabao Cup in the semi-finals by Man City.

However, they remain in with a shout of a Europa League and FA Cup double, eliminating AC Milan and Liverpool along the way.

On the other hand, not much will be expected of Granada. They reside in eighth place in La Liga, having won just two of their last nine league games.

In the Copa del Rey, they seemed on course to reach the semi-finals, leading Barcelona 2-0 with just two minutes remaining. However, late goals by Antoine Griezmann and Jordi Alba took the game to extra time, and the Catalan giants ended up winning 5-3.

Nonetheless, they have managed to pull off one giant-killing already, eliminating Napoli in the Round of 32 in the Europa League. Man Utd cannot afford to underestimate Granada.