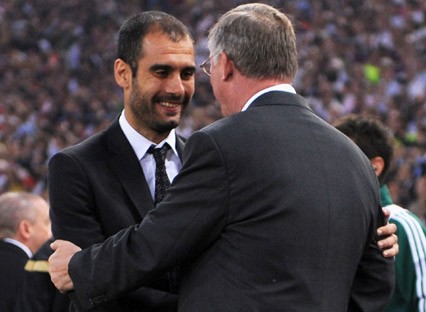 It is being billed as potentially the ‘best’ Champions League Final in the last decade by Manchester United manager Sir Alex Ferguson who will be hoping to avenge a Barcelona side that seemingly eased to victory in the 2009 final.

Today’s event will be watched from all four corners of the world as its top two club sides go head to head in a battle of skill, flair, efficiency and pride. It was Barcelona who became rulers of their continent in the eternal city of Rome in 2009 – a fitting venue for a gladiatorial clash. Now ‘football has come home’ to Wembley Stadium and again, how fitting that two of the best at playing attractive brands of football are to mark the occasion.

Both managers have been speaking ahead of the game with Barca’s Pep Guardiola’s future being shrouded into doubt by club legend Johann Cruyff.

“Guardiola has put in a lot of hard work in the past few years and it would not surprise me if he decides to leave Barcelona after the Champions League final, regardless of the outcome of the match” Cruyff told the Daily Telegraph.

“If he decides to leave, it would only be because it is very difficult to deal with the heavy pressure for such a long time. That is why I think this could be his last year, but he will not have any problems in finding a new team.”

In his pre-match press conference yesterday evening, Pep was keen to avoid such questioning on the matter.

“Today is not the day to talk about that (his future).We have worked an enormous amount of time to get here and overcome many difficulties. It is a privilege to be here, so let’s not talk about anything else. Leaving? Let’s leave that for another time.”

Instead and rightfully so, the Blaugrana master emphasised the need to focus on the 7:45pm kick-off come tonight, where they will have a duty to put on a show for the watching eyes of the world.

Interestingly he stated that he felt his side were complacent in Rome two years ago and cannot afford a repeat of that performance this time around.

“We have the audience of the world and we have to show we deserve this credit of ‘the final of the decade’. When you play in a final and both teams want to win and both want to play, for the rest of the world it will be a good final.”

“They have their strength, we have our skill, and we have to see who controls the situation best. If we play as we did in Rome, this time we won’t win. We played worse in Rome than we wanted to. We need to play much better than in 2009 and this is the thing I’ve told my players over the past couple of days.“

As for the United camp, Sir Alex Ferguson was unsurprisingly focused in his pre-match briefing whilst  teasing the on looking press with a hint at what may be on offer tonight .

“This could be the best final of this coming decade.”  he said.

It is evident that United want to portray their attacking qualities whilst being diligent and efficient.

The manager recalled his disappointment of losing the final two years prior but states there is no desire for revenge over their opponents, instead calling for focus from his players.

“We were disappointed we lost the game but it isn’t a matter of revenge it is about our own personal pride. We are very focused this time and our preparation has been better. I think we maybe made one or two mistakes last time but not this time.”

“The success of both clubs over the last decade has been enormous. For my players now, it’s simple. They have to trust themselves and each other.  I certainly trust them and they will do their job right. They are a great side but we have to focus on ourselves. We have the players to do it and the attacking players we need on show will be there.”

United picked up their first European Cup at Wembley back in 1968 and the Scotsman was feeling nostalgic to be contesting back at the famous ground.

“I think this is a symbol of English football. It’s the right stage for this game. When you are at Wembley, it gives you a certain awareness that it is a big game and I quite like big games. There are none bigger than a European final.”

Stay tuned to Soccerlens for all your Champions League digestion throughout the day.