It had to happen eventually. The conversion of football from a joyful sporting pursuit into a sprawling global business had to have side effects. They are visible everywhere; from shirt sponsorships to endorsements, from stadium names to media coverage.

And now, it seems, the world of fantasy football has decided it is time to get with the times.

11kicks.com is a new game boldly venturing into a field usually dominated by the all-conquering, stupendously simplistic Premier League.com Fantasy Football. Its premise is simple; pick yourself eleven players – you will notice a theme emerging around the number ‘11’ soon I’m sure – enter into an eleven-team public league (or alternatively create a private one yourself), and see how many points you can pick up. Hopefully it will be more than 11.

There are Premier League, Champions League and La Liga games available, you are not allowed more than 2 players from any one club and there are no imaginary values for players. Simple. 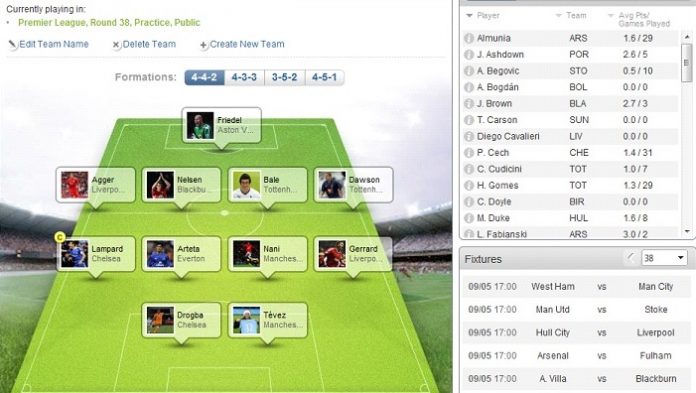 But here’s the twist. And, unsurprisingly, it revolves around money.

Profiting from your fantasy management skills

For whilst there is the satisfying prospect of playing for pride in one of 11Kicks’ ‘practise’ leagues, the real appeal of the game is that it gives users a chance to win genuine cash. And nothing makes football more appealing than cash now, does it?

By credit card, PayPal or Neteller, users can add funds to their 11kicks account, which can then be used to enter into as many competitive leagues as can be afforded (there is no limit imposed by the game). With ‘Silver’ league entry costing £9.99 per entry – and both Gold (£20) and Platinum (£40) to be added shortly – it is up to the user how confident they feel about their fantasy management skills, and how much money they are willing to risk.

Leagues can contain anywhere between 2 and 11 (see the theme yet?) teams, with the overall ‘pot’ shared out between the top scoring sides as shown below.

So if mathematics have never been your strong suit, let me explain. If 11 teams compete in a ‘Silver’ league at £9.99 each, making a total ‘pot’ of £109.89, then the prize money would be shared thus;

Complicated? A little. But then so is football. And whilst £69.23 may seem a strangely-uneven figure to win, it is better than nothing, no?

Financial intricacies aside, the game is actually pretty simple to set up. The usual basics apply; you name your team, you pick your team from the vast database of Premier League, Champions League and La Liga players, and you select a formation (4-4-2, 4-3-3, 3-5-2 or 4-5-1 – none of this messing about with holding midfielders and withdrawn central strikers, thankfully). Once you decide, away you go.

Of course a drawback in having no fantasy ‘budget’ on which to assemble your team is that the likelihood of teams consisting of largely the same players is increased. Maybe it is just me, but one of the most satisfying elements of other fantasy football games is the less-heralded, bargain-basement players who are in your side simply to make up the numbers, but who miraculously come good with a hot-streak.

This season alone, I have been left dumbfounded by the performances of Liam Ridgewell, Stephen Carr and the frankly terrific Bobby Zamora. That is what fantasy football should be about, not sticking Fabregas, Lampard, Gerrard and Rooney in the same side and watching the points roll in. Anyone could do that.

Still, this is a game in its infancy, with plenty of time to grow and adapt. It has plenty of other redeeming features, aside from the obvious financial rewards. Its points system is pretty fair with a couple of subtle differences from the usually-preferred model. For example, goals scored via a penalty receive less points (for defenders and midfielders at least) than those scored in open play.

Additionally, a sending-off consisting of two niggly yellow-card fouls receives a lesser punishment than one arriving courtesy of a headbutt or a two-footed, straight-red, lunge. The full points system is below:

There are other features which impress. The idea of a ‘live chat’ is one that few other games have experimented with, but with 11kicks users are given the chance to “converse with, and trash talk” fellow competitors. And with 2222 (you’d expect it to be 1111, wouldn’t you?) teams already signed up to the game, the system is clearly taking off.

The usual array of statistics are on show, whilst there is a handy ‘blog’ section, which offers a neat little round-up of the previous week’s action, a preview for the coming round of fixtures, as well as general, opinionated football pieces. 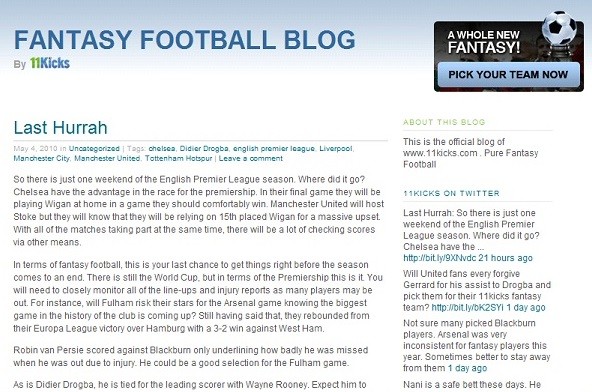 Given how much we love our iPhones, it’s criminal that no one has done a decent fantasy football management app already available. 11Kicks does an outstanding job of it (the app is still in beta but should be publicly available for the World Cup) and gives you all the functionality that you get on 11Kicks.com, allowing you to:

All in all it is a game with plenty of potential. The megalomaniacs will doubtless be excited by the prospect of lining their pockets with strange cash figures, whilst the idea of user interaction is one that should be explored further – in the style of Xbox live and the likes. There are of course issues which could do with ironing out, such as the overall presentation of the game, but for a new game of less than 3000 players (compared to the Premier League version, which currently has more than 2.3million worldwide), it is finding its feet.