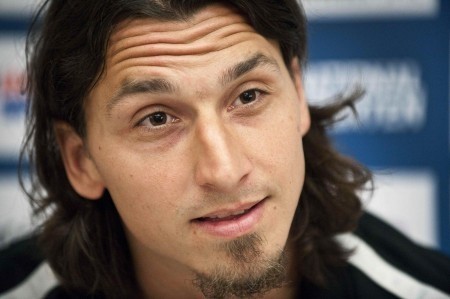 Love him. Hate him. But can you ignore him? He is such an amazing personality. And likewise an equally gifted footballer. He is a genius.

On pitch, he can do things, which mere mortals dread to think of. Off the pitch, he is equally a tough person to deal with. And normally those who are outspoken-type, they tend to court controversy anyway.

Lets have a look at some amazing quotes from the talisman Sweden International. We pick up ten of his very best here, enjoy!

He bamboozled former Liverpool defender Stephane Henchoz with his majestic skills. The former Switzerland defender was left bewildered by fancy tricks, but the event was made memorable by Zlatan’s own admission of superiority after the encounter.

On his Trial at Arsenal

Zlatan holds a high respect and admiration for Jose Mourinho (more about that later) but he was not clearly impressed with Arsenal boss Arsene Wenger. He was linked with a move to Arsenal back in 2000, when he was playing for Swede club Malmo. Wenger offered him a trail before a decision could be taken, to which Zlatan politely declined.

He said: “Arsene gave me the famous red and white jersey – the No 9 shirt with Ibrahimovic on it and I was so pleased I even posed for a picture wearing it,”

“It was a fantastic moment for me. Arsenal had a great team then and here was an Arsenal shirt made just for me. So then I waited for him to convince me that I should join Arsenal. But he didn’t even try.

“He never actually made me a serious offer, it was more, “I want to see how good you are, what kind of player you are. Have a trial”. I couldn’t believe it. I was like, ‘No way, Zlatan doesn’t do auditions’.”

Zlatan regards Jose Mourinho in the highest esteem and likewise, he has strong aversion for Pep Guardiola. A quote from his autobiography, where his admiration for the Chelsea boss is evident:

Jose Mourinho is a big star…He’s cool. The first time he met [my wife] he whispered to her: ‘Helena, you have only one mission. Feed Zlatan, let him sleep, keep him happy!’ The guy says what he wants. I like him.

And now this one, a direct comparison with Mr. Guardiola:

“Mourinho is Guardiola’s opposite. If Mourinho brightens up the room, Guardiola pulls down the curtains and I guessed that Guardiola now tried to measure himself with him.”

Sometimes you need to just unleash charismatic players instead of holding them down with theories, plans and philosophies. Same has happened with Zlatan, who had least interest in the long and arcane footballing concepts of the Spaniard.

“Then he started his philosopher thing. I was barely listening. Why would I? It was advanced bullshit about Blood, sweat and Tears, that kind of stuff.”

On his Unique Style

People say he is enigma. But, when asked about his style of play he simply replied – “Zlatan-style”. Short. Simple. Magnificent.

Once a reporter asked him “who is the best looking woman in the world?”. Zlatan coolly replied –“I don’t know. But when I find her, I will date her.”

On another incident, one reporter curiously asked the Swede why he had scratches and scars on his face.

He answered: “Well…I don’t know… you’ll have to ask your wife about that.”

Media always have an issue with Zlatan and it was rumoured back in 2010 that the Swede and Shakira’s boyfriend Gerard Pique, who was his team-mate then, were having a homosexual affair.

When a female reporter wanted to hear more from it, he said:

“Come over to my house baby, and bring your sister. I’ll show you who’s gay!”

When asked what he got his wife for her birthday, he replied – “Nothing, she already has Zlatan.”

And when asked “What would you name your son”, he said “Zlatan JR”. Sadly, his kids were not named after their father.

Mario Balotelli has that bad boy image too. But, Zlatan isn’t a bad boy. He is a unique-boy. He has that touch of class with everything he does that separates him from others.

We all laughed about Balotelli’s infamous firework incident. Well, this is what Zlatan had to say:

“I like fireworks too, but I set them off in gardens or kebab stands. I never set fire to my own house.”

And Finally on Zlatan’s Philosophy

He believes hard work can take a person to a certain extent but other things you’re just born with. It is destiny. And probably he is right.

“To make him happy and everybody else. You were born as the one you are. I mean destiny, yes there is destiny. Some things is made by destiny yes, other things by hard work, but quality you don’t learn.”