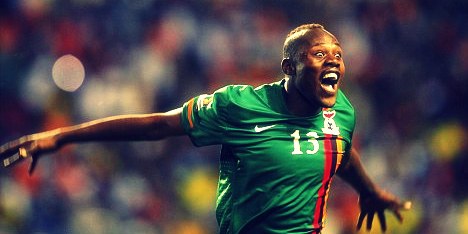 Zambian international defender Stoppila Sunzu has claimed that he is about to sign for Arsenal and will join the Gunners after the African Cup of Nations.

The 23-year-old center back is certainly not the big name signing that Gunners were expecting this winter, but his performances in the previous edition of African Cup of Nations has certainly highlighted his potential.

This could be yet another classical Arsene Wenger signing. The Frenchman has made a name for himself in digging out unknown talents across Europe and Africa; as Laurent Koscielny would concur.

But Arsenal are not the first English club to cast their eyes on Stoppila Sunzu (interesting name for a defender). Four years ago Reading invited the then 19-year-old for a trial (after he caught the eye with some wonderful performances in the U-20 World Cup in Canada), but any deal failed to materialize due to work permit issues (due to lack of international caps).

Stoppila Sunzu, who is versatile enough to play both as a central defender and a defensive midfielder, made it to the headlines in the last African Cup of Nations. The defender scored the winning penalty in the final against Ivory Coast, a match which also featured Arsenal forward Gervinho.

Sunzu has revealed in a recent interview that he is about to join the London club with talks between Arsenal and the Congolese football club TP Mazembe’s chairman Moise Katumbi, entering the final stages. The defender confirmed that he will travel to London after participating in Zambia’s friendly against Tanzania.

Sunzu was quoted in the press:

“I will be travelling to England to sign a deal with Arsenal after the friendly game against Tanzania.

As we speak, Mr Katumbi’s personal consultant Salomon Eskadela is here in Zambia waiting to travel with me to England.

“I don’t know the details of the deal yet because I have not discussed with both Arsenal and TP Mazembe.

However, I spoke to both Mr Katumbi and Arsenal Manager Arsene Wenger who assured me that I would not be going to London for trials but to discuss personal terms and possibly sign a contract.”

The Zambian international is one of the few players who have won both the African Cup of Nations and the African Champions League. Sunzu, who mainly plays as a defensive midfielder for his club side, has also scored 21 goals in 53 appearances for TP Mazembe.

Stopilla Sunzu could be the first of a string of new signings that Arsenal are expected to make in the January transfer window.