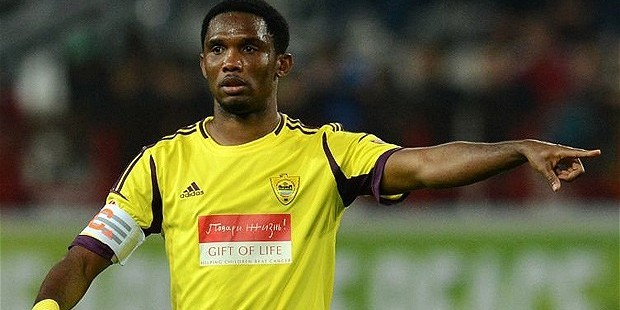 With less than a week left to go for the start of a brand new season, Arsenal are yet to sign any major name. The Gunners are hoping to land a quality forward in the summer and have chased Liverpool striker Luis Suarez, only to suffer outright rejection.

Arsene Wenger has been given a transfer war-chest of £70 million and it is quite clear that the Frenchman wants to bring in a quality striker at the Emirates. The Gunners are even prepared to break their transfer record for Suarez and had put in a club record bid of a staggering £40 million, though it is still £15 million short of Liverpool’s valuation.

Though, Arsenal have yet to accept defeat in the chase, despite knowing the transfer a hit an impasse, sooner or later they will have to shift their attention elsewhere. Or, they might gamble on a proven world class striker Samuel Eto’o, who is available in the market and that too on cheap.

The 32-year-old plays for Anzhi Makhachkala and has been placed on the transfer list after the Russian outfit were forced to cut their budget, after suffering financial losses. The former Barcelona and Inter Milan star will be available for cheap, and if the reports are to be believed, London giants Chelsea and Arsenal are showing interest in him.

In fact, it makes a lot of sense, if Arsenal go for him in the summer, than Suarez. For all the brilliance Suarez possess, the Uruguayan is not a natural no9 by any stretch of imagination. He is a versatile player, who likes to exert his influence from the deep, bringing a lot more to the game.

Earlier in the summer, the Gunners were linked with Gonzalo Higuain, a typical goal poacher. If anything Arsenal need at the moment is a solid no9, whose only job is to dispatch goalscoring chances.

While Suarez does score goals too, but a look at the amount of chance he created only shows, the nature of player he is. Further, Suarez is not a clinical finisher unlike some of other natural strikers.

Eto’o on the other hand is a typical “direct” forward, who knows the art of goal scoring. He scored a phenomenal 108 goals in 145 league matches for Barcelona, 33 in 67 for Inter and 25 in 51 for Anzhi that shows even at this age, he is more than capable of scoring regularly.

Suarez will improve any side in this world, no doubt, but keeping it on a realistic level, especially after been rejected twice, is there sense in waiting on him? Precious time is running away for Arsenal while it has become a sort of foregone conclusion that Suarez will stay at Liverpool. In such a situation, buying a reliable, proven world class talent, goal scorer, at a cheap price makes a hell lot of sense