And lo, we find ourselves face-to-face once more. Welcome, friends, to the daily World Cup column on Soccerlens.

It would appear that, despite bravely limiting Mexico to only two goals the other night, all is not well within the French World Cup squad.

In the same unconvincing manner in which they saw off Denmark in their opening game, Bert Van Marwijk‘s men produced yet another workmanlike display to secure a slim victory over Japan  – a win that would later see them qualify for the second round when Cameroon failed to beat Denamrk.

The well-drilled Japanese side nullified their Dutch opponents’ obvious attacking threat during a fairly featureless first-half, as Wesley Sneijder and company struggled to settle into any discernible rhythm – with most of their possession being confined to innocuous areas of the pitch.

As half-time drew closer the Dutch began to become visibly frustrated, with Rob Van Persie becoming increasingly isolated up front. As such, Japan went in at the break the happier team having enjoyed a prolonged spell of relative dominance.

However, the Dutch began the second half with renewed vigour and took the lead in the 52nd minute when Sneijder blasted a shot past Eiji Kawashima – the Japanese ‘keeper failing to react in time to deflect the drive anywhere else but into the far corner of his goal.

The Netherlands continued to press, with substitutes Eljero Elia and Ibrahim Affelay providing some impressive sparks of creativity as the game wore on.

However it was Japan who had the best chance to score, Shinji Okazaki sailing his shot over the bar when he seemed better placed to at least test Maarten Stekenlenburg.

Despite taking an early lead, Australia were forced to fight tooth and nail to end the game on level terms, after being forced to play for almost 70 minutes with only ten men.

After being soundly thrashed by Germany in their opening fixture the Socceroos were looking to make amends, and took an 11th minute lead when midfielder Brett Holman was quick to capitalise on a goalkeeping error – pouncing on the rebound when Richard Kingson failed to deal with Mark Bresciano‘s tame free-kick.

However, just 15 minutes later Harry Kewell saw red for deliberately keeping Jonathan Mensah‘s goal-bound effort from crossing the line with his arm. The former Liverpool winger felt sure that the shot had hit his chest and even pleaded with the referee to watch the replay that was being screened on the stadium’s big screen, but the Italian official Roberto Rosetti had already (quite rightly) made up his mind.

Asamoah Gyan dispatched the resultant penalty with minimum fuss, there-by doubling his goal tally at this summer’s tournament after also scoring from the spot in Ghana’s opening game win over Japan.

The Black Stars’ inexperience then began to show as they failed to take advantage of their numerical advantage, resorting to speculative long-range efforts rather than using their extra man to create opportunities – although Mark Schwarzer did have to be at his best to repel efforts from Kevin-Prince Boateng and Gyan respectively.

The Africans became the first country to be mathematically dumped out of the World Cup after Denmark came from a goal down to win what turned out to be a thoroughly entertaining game in Pretoria.

Denmark have made it through the group stages in all three of their previous World Cup appearances and Morten Olsen‘s side look likely to continue that streak – with a win against Japan in their next game enough to see them advance from Group E along with Holland.

Cameroon took the lead with only ten minutes on the clock, Samuel Eto’o (who had been restored to a central striking role) eventually profiting on Christian Poulsen‘s defensive error after Pierre Webo intercepted the Dane’s telegraphed square pass and played in the Inter Milan goal machine.

The aging Scandinavians rallied and got themselves back on even ground when Dennis Rommedahl collected Simon Kjaer‘s exemplary cross-field pass, flew past his marker and fired the ball across the goal mouth for Nicklas Bendtner to slide in at the far post.

Both teams had good chances to end the half a goal to the good, but Jon Dahl Tomasson saw his effort blocked by Alex Song and Eto’o struck a post following a frenzied scramble in the Danish box.

15 minutes into the second half Denmark eventually took the lead when the impressive Rommedahl, who struggled to make an impression during his time in England with Charlton Athletic, skipped inside Jean Makoun and curled a shot into the far corner past the despairing dive of Hamidou Souleymanou.

The Indomitable Lions (a fairly ironic moniker in hindsight) almost equalised late on but Christian Poulsen put his boyish good looks on the line to block Vincent Aboubakar‘s powerful shot with his face. 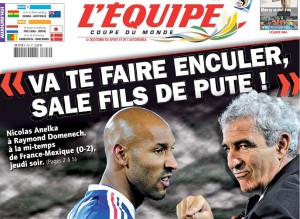 France striker Nicolas Anelka has been sent home from the World Cup after refusing to apologise to coach Raymond Domenech for an expletive-filled half-time rant during Les Bleus‘ defeat at the hands of Mexico.

The temperamental Chelsea forward reportedly insulted Domenech in the dressing room after finding out that he was to be hauled off at the break in favour of Andre-Pierre Gignac, and then refused to publicly apologise when accounts of the spat began to surface in the media.

“[Anelka] will leave the Team France camp this evening.

Words spoken by Nicolas Anelka to the national coach, Raymond Domenech, are completely unacceptable to the FFF, French football and the values they defend.

Upon refusal by the player to deliver a public apology, we made the decision – in full agreement with the coach and members of the official delegation – to exclude Nicolas Anelka from the group.”

It is now widely expected that Anelka will announce his retirement from international football.

Nicolas Anelka whilst speaking to France-Soir. I can think of one possible exception.

Evra looking to ‘flush out the traitor’… 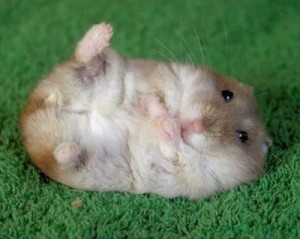 The disharmony within the France squad is showing no signs of abating after the removal of bad-egg Nicolas Anelka, with captain Patrice Evra now vowing to put his sleuthing skills to the test by finding which member of his 23-man squad leaked details of the half-time row to the press.

French sports daily L’Equipe had various details of the incident splashed all over their publication and Evra believes that the reports were too accurate to have just been idle speculation on the rag’s behalf;

“The problem of France is not Anelka, but the traitor among us. We must eliminate the traitor from the group, because he wants to hurt the team.

There is no little mouse in the locker room, this comes from someone who is on the team and wants to hurt the team.

We are not going to lie, the reporter [from L’Equipe] did not make this up. I do not know anything [about this person], I am not a magician.”

‘It never rains…’ and all that! 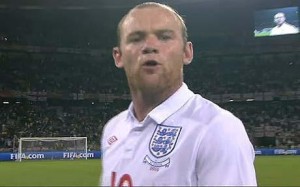 Following his little post-game charade yesterday, England striker Wayne Rooney has issued a short statement on the FA’s website apologising for his outburst.

So said the man himself;

“Last night, on reflection I said things in the heat of the moment that came out of frustration of both our performance and the result.

For my part I apologise for any offence caused by my actions at the end of the game.” 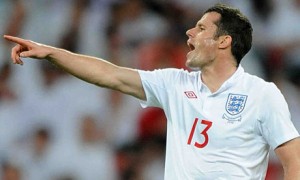 There are reports in some of the more spurious British tabloids this morning that Rooney’s apology (not his petulant outburst!) has caused a rift in the England squad – with the players being divided as to whether the Manchester United man was right to say sorry or not.

Should these particular allegations be true (you can be pretty sure they aren’t), defender Jamie Carragher has made no secret of which side of the fence he would fall on – defending the England faithful’s right to signal their frustrations;

“I feel the supporters in the stadium were perfectly entitled to boo the team. I’ve never had a problem with that.

I’ve always said fans should support during the game but, at the end, they’re right to let us know when they’re not happy.

It’s not as if they’ve only travelled around the corner to watch us.”

Carra’s probably just used to all that booing given the season his club side endured last term! 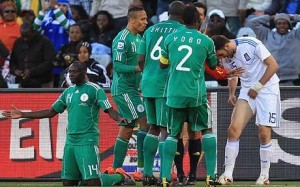 Nigeria defender Sani Kaita has revealed that he has received death threats following his red card during the Super Eagles’ 2-1 Group B defeat to Greece last Thursday.

The African side were one-nil up when Kaita inexplicably raked his studs down the leg of Greek midfielder Vasileios Torosidis as the ball rolled harmlessly out for a throw-in.

After the game, Kaita said that he had received multiple emails which threatened to harm him and worse – although he is remaining philosophical about it all;

“Yes, I have received some threats to my life. They were sent to my email but I’m not disturbed about that because as a Muslim, only God decides who lives and who dies.

Everything on this Earth is in God’s hands, whether it is your life or whatever and unless God allows it, no-one has the power to kill me.

Only God knows what will happen tomorrow. He holds our destiny. That is what my religion teaches me.”

I suppose he must have received instruction from on-high to leave a three-inch gash in Torosidis’ right thigh as well.

Brazil coach Dunga has slammed journalists from his country for continually spreading rumours about fantasy injuries within his squad. (F365)

David Beckham has played down the incident that saw a fan breach security and make his way into the England dressing room after the Algeria game. (BBC Sport)

England coach Fabio Capello ‘expects to be sacked’ if his side flop in South Africa. (Goal)

Today’s (Sunday 20th June) round is as follows: