Goedemorgen and welcome to the daily World Cup column on Soccerlens.

Now forgive me if this sounds a little bit over-dramatic, but I think that yesterday may have been the greatest day’s-worth of football I have ever witnessed. In my life. Ever.

A resurgent second-half performance from the Netherlands saw them eventually power past five-time winners Brazil and into the semi-finals of a World Cup for the first time since 1998.

Brazil took a 10th minute lead when Robinho stole in behind a stationary Dutch backline and slotted Felipe Melo‘s searching throughball underneath Maarten Stekelenburg and into the back of the net.

Brazil then saw out the first-half in relative comfort and went in at the break having dominated the proceedings. With their opponents looking decidedly short on ideas, the Selecao appeared to have the game all but sewn up.

However, it was a completely different story in the second-half.

Although Bert Van Marwijk‘s side started the second period in the same cautious manner as they had ended the first, they were soon gifted a chance to pull themselves back into the game – an opportunity that was seized with both hands.

After Wesley Sneijder had whipped a deep cross in from the right flank, ‘keeper Julio Cesar collided with Melo and the ball flicked of the unfortunate midfielder’s head and into the far corner.

Finding themselves fairly fortuitously back on level terms, the Oranje sprang into life – and we finally started to see glimpses of the fluid attacking football for which they are famed.

With the wind in their sails, the Netherlands pressed forward in search of a winner and quickly nudged themselves in front in the 68th minute – an unmarked Sneijder nodding in after Dirk Kuyt had flicked on Arjen Robben‘s corner.

By this time Brazil had lost all of their early impetus, and the threat of any potential comeback was effectively neutered just five minutes after Sneijder’s goal, when Melo saw red for inexplicably choosing to stamp on an already prostrate Robben.

Dunga’s side were visibly disintegrating but continued to throw men forward in a desperate search for a dramatic equaliser, which resulted in gaping holes being left in their back-four – holes that would have been further exploited, if it weren’t for late-substitute Klaas-Jan Huntelaar‘s hesitance in front of goal.

Dunga to step down? 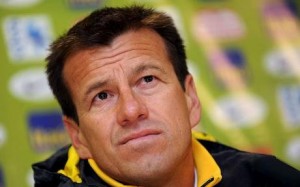 Brazil coach Dunga has hinted that he may step down following his side’s elimination from the World Cup.

Speaking after the game, the 46-year-old told of his disappointment and also indicated that he may relinquish the Selecao reigns;

“We are all extremely saddened. We didn’t expect this and we hoped for a different result.

We knew it was going to be a very delicate, very difficult game, but we weren’t able to maintain the rhythm we had in the first half in the second half.”

Asked about his future, Dunga (who has been in charge since 2006) replied;

“We knew when I started that I would be here for four years. It’s sad, it’s difficult, nobody prepares to lose.”

Uruguay ended their 40 year wait to reach a World Cup semi-finals in dramatic fashion, by seeing off Africa’s sole remaining hopes Ghana in an enthralling, topsy-turvy match at Soccer City.

Both sides enjoyed extended periods of ascendancy during the opening exchanges, with Uruguay perhaps shading things.

However, it was Ghana that went in at half-time with a one-goal advantage as, two minutes into first-half stoppage time, Sulley Muntari fired a swerving long-range shot past Fernando Muslera.

Just ten minutes after the restart, Diego Forlan restored parity for the Charruas with his third goal of the tournament – crashing an unstoppable, angled free-kick past Richard Kingson and into the far corner.

As the game drew on, things became increasingly stretched and both teams were presented with multiple chances to score, but it wasn’t until the final minute of extra-time when things began to get really interesting.

With the Black Stars pushing relentlessly forward, things started to get more than a little fraught in the under-fire Uruguayan defense.

Moments after Andres Scotti had almost turned the ball into his own net after denying Asamoah Gyan with a scrambling block, came the moment that will undoubtedly come to define the African side’s World Cup.

After Dominic Adiyiah had turned a late corner goalwards, Luis Suarez made a couple of last-gasp goal-line blocks – firstly with his knee, and then secondly with his hands.

The Ajax forward was dismissed and Gyan, Ghana’s star of the tournament, was handed a golden chance to win the game for his country from the spot, with what would (and should) have been the very last kick of the game.

Unfortunately, the striker chose power over placement and saw his effort fly over the crossbar and sail high into the stands, with the final whistle sounding before Gyan could even begin to fathom his spiralling emotions.

And so with Uruguay reprieved, they went into the shootout in confident mood whereas Ghana were understandably frayed.

Fluffed penalties from Jonathan Mensah and Adiyiah gave Sebastien Abreu the chance to wrap it up for the Celesti, and the Botafogo striker duly took it – cooly chipping his penalty past Kingson to book his country a place in the last 4. 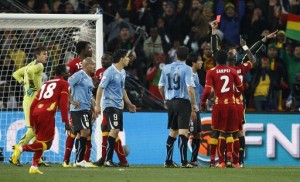 Uruguay coach Oscar Tabarez has claimed that to label Luis Suarez a cheat for the handball that eventually put his side through to the World Cup semi-finals is ‘too harsh’;

“When there is a handball in the penalty area there is a red card and the player is thrown out of the game.

Saying we cheated Ghana is too harsh a word to use. We also abide by what the referee did – it could have been a mistake. Yes he stuck his hand out but it’s not cheating – I don’t think it’s fair to say that.

I think it was instinctive. The player instinctively reacted and was thrown out of the match and he can’t play the next match. What else do you want?”

Tabarez also pointed out that Ghana still had a chance to win the game outright, and that his side cannot be held responsible for Asamoah Gyan‘s resultant penalty miss;

“Is Suarez also to blame for Ghana missing the penalty? We try to be dignified and if we lose a match we look for the reasons for it. You shouldn’t look to third parties.

This is football. There are consequences to that handball and he didn’t know that Ghana was going to miss that penalty.” 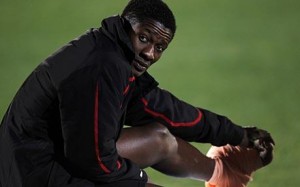 Ghana striker Asamoah Gyan has vowed to bounce back from his heart-breaking last-ditch penalty miss against Uruguay;

“I’ll bounce back, I’m strong mentally. I had the courage to take the penalty, but that’s normal, I’m the penalty taker.”

But that’s not the game, now he [Luis Suarez] is the hero in his country, the ball was going in, he stopped it and I missed the penalty. That’s the way it is.”

Gyan resolved himself to emphatically fire home the first of the Black Stars’ shoot-out spot-kicks, but was inconsolable when the African side eventually crashed out of the tournament.

Messi will start, despite flu… 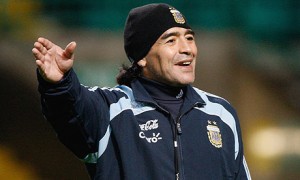 Argentina coach Diego Maradona has confirmed that Lionel Messi will start against Germany later today, dismissing rumours that the winger would have to sit the game out after missing training on Thursday and Friday with a bout of flu.

“[Messi] did feel a bit under the weather, had a slight fever. He told me about it and I sent him back inside. It was very cold when we started training at 4.30pm. I gave him a bit of a rest.

The session went well, but I never considered him not playing in this game. I just let him have a rest so he could play against Germany.”

Messi is still looking for his first goal in South Africa, but the diminutive winger has provided assists for more than half of of the 10 goals Argentina have scored at the tournament so far. 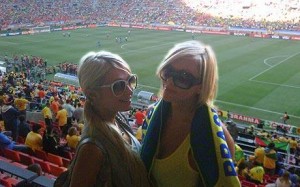 Hotel heiress (and professional waste of DNA) Paris Hilton has been released after her and a friend were arrested for allegedly smoking marijuana at yesterday’s quarter-final clash between the Netherlands and Brazil in Port Elizabeth.

Hilton has been let go without charges, but her friend Jennifer Rovero has been ordered to pay a R1,000 ($130) fine or face spending 30 days in jail.

A statement from the socialite’s publicist read;

“Paris Hilton was questioned today by police in South Africa on allegations of smoking marijuana.

However I can confirm that the incident was a complete misunderstanding and it was actually another person in the group who did it. The case has been dropped against Paris and no charges will be made.”

Covering all the BIG NEWS, yet again!

The nutmeg to end all nutmegs?

Spain’s Juan Mata reduces his teammate Raul Albiol to a gibbering lump of jelly as the Furia Roja squad prepare for their friendly game against Poland in early June.

Not strictly World Cup-related I know, but very impressive non-the-less!

“It was my first headed goal – and I don’t think it will happen again. Chances are it won’t. But it was great. It just slipped off my bald head and went into the net. It was a great feeling.”

Just in case you missed it yesterday, the FA have confirmed that Fabio Capello will continue as the England manager. (Soccerlens)

Speaking of Capello, it would seem that Rio Ferdinand is still backing the under-fire Italian coach. (F365)

Paraguay manager Gerardo Martino is hoping for a ‘historic win’ against Spain, that will see his side reach a World Cup semi-final for the first time ever. (Sporting Life)

Spanish midfielder Cesc Fabregas has backed international teammate Fernando Torres to finally hit his stride against Paraguay, after failing to impress at the World Cup so far. (Goal)

Today’s (Saturday 3rd July) round is as follows: