Afternoon everybody, and welcome to the daily Soccerlens World Cup column.

Here’s the best of what the tournament, way down yonder in South Africa, has to offer up today…

Slovenia moved to the top of the Group C table after captain Robert Koren‘s late winner secured them all three points against Algeria in Polokwane yesterday.

Just as the game was about to enter the final ten minutes Koren, recently released by West Brom, let fly with a low 20-yard effort that somehow evaded Algeria keeper Faouzi Chaouchi‘s awkward dive and ended up nestled in the far corner of the net – thus giving the Eastern Europeans their first ever win at a World Cup finals.

Algeria also did their bit to rewrite the record books when forward Abdelkader Ghezzal picked up the fastest red card for a substitute for two bookable offences in World Cup history after being issued with a second caution for a frankly ludicrous handball. A proud day for the Ghezzal family I’m sure!

Yet another solitary late goal was enough to ensure that Ghana got their World Cup campaign off to a well-deserved winning start.

Portsmouth’s Kevin-Prince Boateng shone in what was only his second appearance for his country, as Serbia struggled to contain the mobile, well-conditioned Ghanaian midfield.

Serbia’s plight was made even more difficult when defender Aleksandar Lukovic picked up a second booking for impeding Asamoah Gyan just 15 minutes from time, but there was still time for Raddy Antic‘s side to threaten the Ghana goal – ‘keeper Richard Kingson reacting quickly to palm a close-range Milos Krasic effort over the bar.

However, Ghana finally received the breakthrough their dominant display deserved as they were awarded an 85th minute penalty when Zdravko Kuzmanovic inexplicably handled a high cross slung into the area – which Udinese striker Gyan confidently dispatched to give the Black Stars the perfect start in their bid to progress from a potentially difficult group.

Germany pulled out a 4-star performance, filled with attacking creativity and guile, to comprehensively beat ten-man Australia in their opening World Cup clash.

Germany were aided in their victory by two significant factors, the first being the sparkling performance of young Werder Bremen midfielder Mesut Ozil and the second being the 55th minute dismissal of Australia’s Tim Cahill for a clumsy – but seemingly innocuous – challenge on Bastian Schweinsteiger.

Watch all the goals from the Germany v Australia game.

Mountain out of a Cahill…

Australian midfielder Tim Cahill was inconsolable after receiving a red card during his country’s opening World Cup clash defeat against Germany yesterday, describing the incident as ‘one of the saddest moments of his career’ before breaking down in front of the assembled media.

The recipient of the offending challenge, Bastian Schweinsteiger, approached Cahill after the game and told the Everton man that he didn’t think that the tackle wasn’t red-card worthy but the German’s gesture proved too much to bear – as Cahill struggled to compose himself during a post-game press conference;

“I’m just sad. It’s probably one of the saddest moments of my footballing career to be in this position, to hear Schweinsteiger say that, it’s very nice of him to say it wasn’t a red card. It just shows you how dreams can be made and crushed in the space of hours.

It’s one of the lowest points of my career. But this is the beauty of football. One day you are a hero, the next day you are at the bottom.”

My leg stayed bent all the way. Never once did I try to straighten it. What do you want me to say?”

Cahill is now certain to miss Australia’s next gama against Ghana on Saturday at the very least. 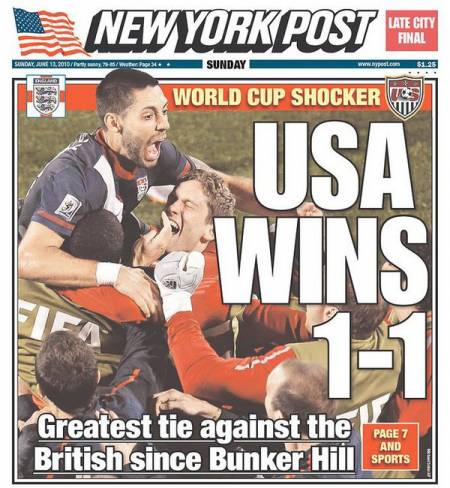 The Yanks still don’t quite get it, do they? 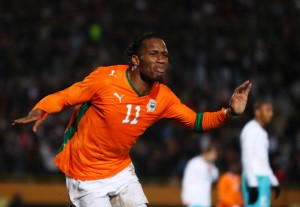 Ivory Coast defender Kolo Toure has issued a rallying call to his team-mates, telling them to believe that they can make an impact in South Africa without or without captain Didier Drogba, who is facing a race to recover in time for their opening Group G game against Portugal tomorrow.

“During the first few days, it was really hard to take because Didier is our captain and best player, after all.

He’s a top goalscorer who has always stood up to be counted when we have found ourselves with our backs against the wall but there are 23 players here representing the Ivory Coast and it is all those players together who will win us matches, not Didier Drogba on his own.

We will deal with whatever comes our way. What counts now is that everyone fights for each other, side by side.”

Toure also praised the way in which newly-appointed coach Sven-Goran Eriksson has changed the attitude of the Cote D’Ivoire collective;

“[Eriksson] has put an added emphasis on playing as a team and not just as a collection of individuals.

He has managed to change the mindset of the team and of each player. We have always had good players, but have never been able to properly work together as an effective unit, defending and attacking as one.

That’s what we have been working on, and we hope that it will bear fruit, starting with our first match versus Portugal.”

I feel your pain Sir, I really do. Brings a new meaning to the phrase ‘knocking a few balls around’.

Fan of the day… 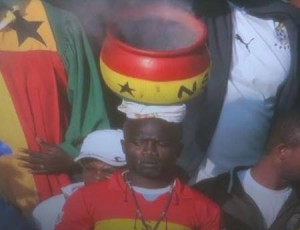 A Ghana fan turned up with a huge smouldering pot on his head, and thought absolutely nothing of it.

Despite protestations from players, supporters and officials alike, the World Cup Organisers have confirmed that they will not be banning fans from bring their much-maligned vuvuzelas to games. (BBC Sport)

England defender Ledley King looks set to miss out on the rest of the World Cup after sustaining a groin strain against the USA on Saturday, leaving Jamie Carragher (who seemingly fancies the job), Matthew Upson and Michael Dawson vying for a starting berth alongside John Terry against Algeria . (Sky Sports)

A slightly more pressing injury concern for England is the fact that Wayne Rooney had to sit out of training this morning after receiving a knock on the ankle, although the injury is unlikely to keep him out of the Algeria game. (Guardian)