There’s exactly one week left, and two of the biggest fish have now been comprehensively removed from the pond.

Who’d have thought that the oft-cited South American dominance, that had been so prevalent in the early stages of the tournament, would culminate in Uruguay (rather than Brazil and Argentina) reaching the semi-finals?

I tell you, the World Cup just keeps getting crazier the further it progresses!

Germany caused one of the biggest shocks of the tournament so far, after not just beating Argentina, but tearing them limb-from-limb in Cape Town yesterday.

An immense midfield display from Bastian Schweinsteiger spurred the Germans on all afternoon, and it was the Bayern Munich man that provided the teasing free-kick delivery that saw Thomas Muller head Joachim Loew‘s side in front with only 3 minutes on the clock.

After their early shock, Argentina settled into a steady rhythm but continually misfired in their search for inspiration – instead seeing themselves limited to speculative long-range efforts by the taught German defensive line.

The Albiceleste thought they had drawn themselves level just before the break, when Gonzalo Higuain tapped in Carlos Tevez cross – but the goal was correctly scratched due to there being four Argentinian players caught in offside positions.

Diego Maradona‘s men looked a little more convincing in the early stages of the second-half, Angel Di Maria zipping a shot from distance across the face of Manuel Neuer‘s goal and Carlos Tevez seeing his goal-bound effort blocked by (the face of) Per Mertesacker.

However, Germany began the process of wrapping up the tie in the 67th minute when Lukas Podolski burst into the area on the blind side of Martin Demichelis and squared a measured ball past the stranded Sergio Romero for Miroslav Klose to walk over the line.

With Argentina on the ropes, Germany mercilessly took advantage and soon increased their tally just seven minutes later. Schweinsteiger’s weaving run through a crowded box culminated in an incisive pull-back, which was bundled in by defender Arne Freidrich for his first ever international goal.

Die Mannshaft‘s fourth and final goal was a masterclass in counter-attacking football. After breaking from his own half, Podolski played in Mesut Ozil down the left channel and the midfielder clipped a perfect first-time ball over Nicolas Burdisso for Klose to volley back across the goal and inside the far post. 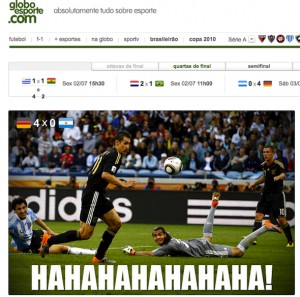 David Villa‘s fifth strike of the tournament was enough to see Spain through to their first ever World Cup semi-final, and send Gerardo Martino‘s heart-broken Paraguay side crashing out in the process.

After a largely forgettable first-half, the game finally burst into life in the 57th minute when Paraguay were awarded a penalty after Gerard Pique brazenly hauled down Oscar Cardozo in the area.

The Benfica striker dusted himself down and took the resultant spot-kick, only to see Iker Casillas guess right and save comfortably – clutching the ball gratefully to his chest at the second attempt.

Literally minutes later, Spain themselves were awarded a penalty when Wigan new-boy Antolin Alcaraz sent Villa tumbling, and Xabi Alonso did the honours – comfortably whipping the ball past Justo Villar from twelve yards.

However, Alonso’s celebrations were short-lived as Guatemalan referee Carlos Batres ordered the kick to be re-taken after adjudging that players had encroached illegally – although the replays showed that any infringement was minimal.

Alonso again stepped up, hoping dispatch at the second attempt – but unfortunately saw his low effort repelled by Villar.

With just eight minutes left to play, Villa finally made the breakthrough that he had been threatening all night.

Following Andres Iniesta‘s pioneering run through the heart of the Paraguayan defence, substitute Pedro crashed an angled shot against the far post and the ever-diligent Villa was on hand to curl home the rebound – the ball glancing off both uprights before nestling in the back of the net.

The South American’s were handed a late chance to equalise when Casillas spilled Lucas Barrios‘ fizzing effort into the path of the on-rushing Roque Santa Cruz, but the rangy striker saw his poked follow-up blocked by the sprawling Real Madrid stopper. 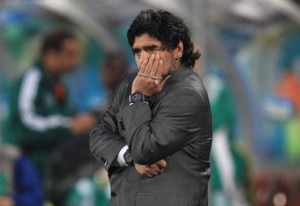 Argentina’s dejected coach Diego Maradona has hinted that he may step down today after seeing his side emphatically dumped out of the World Cup by Germany yesterday.

“I may leave tomorrow, but I’d like that these boys continue showing who they are and keep playing real Argentina football.”

I’ll have to think carefully about [my future] and talk with my family, and the players. There are many issues here.

I’m as disappointed as all Argentines. To see my country lose a football match is very hard for someone who has worn the shirt.”

When asked if he was satisfied with his side’s performance against Germany, the 49-year-old snapped;

“Are you joking? This is a country where you live and breathe football. I don’t think that any will be happy when the team loses 4-0.”

As with Dunga yesterday, I think we can probably expect an ‘announcement’ from El Diego shortly. 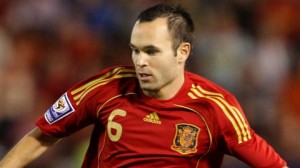 The countries will meet again in the second of the World Cup semi-final ties on Wednesday evening and Iniesta, along with the rest of the watching-world, is very much looking forward to it;

“We’ll be playing Germany again but I don’t think what happened two years ago will have any bearing on the game.

Germany have had a brilliant World Cup so far and regardless of their excellent results they’re also playing very well.

It must be a tremendous motivation for them but we too are at the top of our game.

We’re keen to progress further, it will be a match between two teams that like to keep ball and I think it will be a great match.”

Me too Andres, me too.

Spanish commentator Camacho was so excited by David Villa‘s goal against Paraguay that he apparently suffered a small seizure!

Suarez gets a one-match ban… 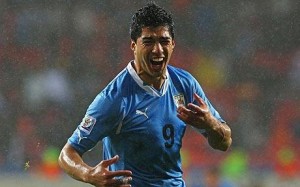 FIFA have confirmed that Uruguay’s hand-ball ‘hero’ Luis Suarez will only receive a one-match ban after being sent off during La Celesti‘s contraversial quarter-final win over Ghana.

The ruling means that Suarez will be eligible for the World Cup final should Uruguay progress past the Netherlands.

The Ajax striker was given a straight red card for saving a goal-bound header on the line in extra-time, Ghana then missed the resulting penalty and Uruguay went through to the semi-final after coming out on top in the shoot-out.

“The ‘Hand of God’ now belongs to me. Mine is the real ‘Hand Of God’. I made the best save of the tournament. Sometimes in training, I play as a goalkeeper so it was worth it.”

Uruguay striker Luis Suarez shows his remorse at ‘single-handedly’ knocking Ghana out of the World Cup.

Wesley Sneijder has been credited with the Netherlands’ opening goal against Brazil. (F365)

England captain Steven Gerrard is the latest big name to call for goal-line technology to be introduced. (Sporting Life)